Naburn back to Selby on the Tidal River Ouse

Talk about every man for himself though ...  oddly, we were given no instructions on leaving the lock at Naburn (6.30am yesterday morning)... 3 narrowboats and one GRP.  I'd done my research before hand speaking to "proper" boaters and salty sea dogs with years of experience in the area.

I'd even read back through Tom's & Jan's blog about when they did it - an experience which in the end pretty much echoed ours.

The plan was, we'd leave Naburn and punch the incoming tide for an hour ish... then tottle downstream in slack water and then arrive in Selby with a "bit of a push" from the now ebbing tide - BIT OF A PUSH?  -  we were varying between 8 and 9 mph in tick over to maintain steering towards the end of the trip.

HOWEVER, before I can explain what the procedure was there, we had to contend with a convoy of 4 boats making their way down stream VERY Slowly, trying to fight against the still incoming tide, WHILST avoiding a whole forest of trees that were determined to make life difficult.  Things went a bit wrong for the boat at the front (poor Eddie & Wendy) as they initially didn't manage enough speed to create the bow-wave required to push the detritus ahead as they went ... which resulted in multiple trees, bed frames and branches gathering on their bow - the outcome of that being them doing 1900rpm and only managing 1-2mph ... whilst we were stacking up behind, slipping in and out of tick over so as not to crash into them. We had our handheld radios set to the same channel so we could communicate with them.

TRYING to dodge the "big stuff" really was a challenge. 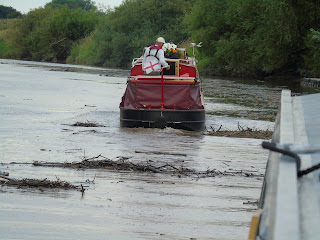 You can see on this video from the bow camera (sorry it's unedited) from about 8 minutes in, the struggle they'd been having with the aforementioned tree.... i.e. by then they could barely move forwards and the tide clock was ticking on.


Andy and I discussed the best thing to do to help and we planned to go alongside to try and push the tree off their bow using ours...  It worked pretty well and once they were free from it, we pushed on ahead and created the "gap to maneuver" I figured we'd need to make the 180 degree turn in Selby and get into the lock.

All had been going well from here onward until we phoned the Selby Lock keeper (as instructed to do on our way up there) to tell him we were just passing Rank Hovis.... the theory being that he'd have the lock ready for us.

Trouble was, the GRP that had been hanging back (presumably to avoid the floating forrest) had recently come racing past and therefore was now in the lock on his own.  The lockie suggested slowing down as he'd need 10 mins to turn the lock.  No biggy, so we radioed back to get Eddie and Wendy to do the same...  I must have gone TOO slow because when we came to do our turn to point back up stream, within moments they came around the corner... along with the other boater.

Anyway - in the interests of transparency, here are the videos from the bow cam of the 180 degree turn, followed by the mad dash into Selby lock trying to avoid Eddie and the other boat coming downstream with the tide....

Sorry, but the 1st one doesn't show us coming around (if that's the correct parlance) until about 9 mins in - the 2nd one takes over the calamity  precision maneuver and resultant "kisses" with the stone work - no damage was done to either boat or lock btw... the "falling noise" is the TV remote jumping off the top of the wall-mounted unit in the bedroom.

The lesson we've learned here is to get everyone in the lock at Naburn to agree a 2-3 minute  delay on exiting so we don't all get in each others way in Selby- only the last boat had the space to himself by going PAST the lock and then coming back upstream... something which in the same position again with no space to maneuver, I might do.

We live and learn.