Hebden Bridge and trip over the Rochdale abandoned...

We set off next morning to Hebden bridge... many a tow path walker cheerfully pointed out we'd not be able to go much further as the canal was empty further ahead... UNDETERRED, we continued with our planned journey - optimistic that by the time we'd got near an empty section, CRT would have filled it with water...

This was to prove foolish. 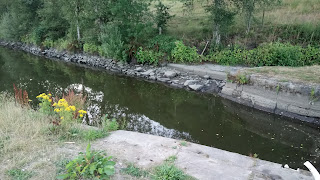 The Rochdale canal IS notorious for being shallow but we'd never expected it to be THIS bad...dragging our bum along the bottom - hitting goodness knows what as we went and MORE often than not getting completely stuck for hours at a time.

We came along a chap who'd got stuck a couple of days previously who'd given in and was just waiting for rain...  right on a winding hole but to be honest it didn't matter as there was so little water in it, we'd not have been able to turn anyway.  It turns out, 'Ellis' sit's a couple of inches deeper in the water than 'Memory Maker'  -  ergo, US going up ahead (and getting stuck) wasn't helpful.

Between locks 7 and 8 we got properly stuck in a thin section... the resultant call to CRT (and a couple of Tweets later), the water level increased enough to get moving again. 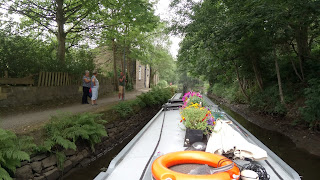 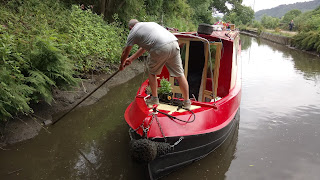 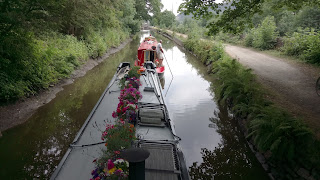 As we eventually approached Hebden Bridge, the result of CRT running water down to re-float us became apparent... although chatting with a local boater, it turned out it'd been like this for over a week. 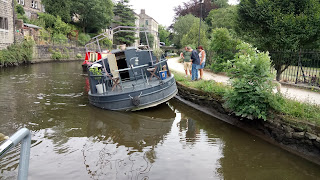 We went up through the next lock and moored for the night near the Bike/coffee shop - which has a very laid back approach to opening hours: 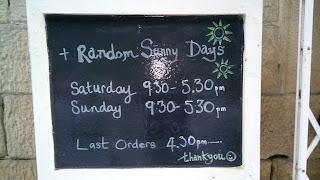 The plan HAD been to go out for tea but we were all just so exhausted and to be honest, thoroughly miserable after a such a frustrating day, we just sat down and discussed what to do for the best.

Wendy and Eddie didn't really have much of a choice but to continue towards the summit  - they would NOT be coming back this way anyway so it didn't matter to them if the canal gets closed...  WE on the other hand would HAVE to come back the way we came due to the Leeds & Liverpool being closed at the end of the month AND the current problem on the Huddersfield.

So, with a heavy heart, we decided to end this journey in Hebden and return whence we came - to get off the Rochdale asap before it's closed all together... ironically, the heavens opened for a couple of hours and we ALMOST reconsidered.

Next morning, looking at weather forecasts, it was abundantly clear, no rainfall is expected in the next 10 days.  We walked along as Eddie and Wendy set off and worked them through a few locks - this turned out to be a good plan as it was so shallow they'd be unable to get to lock landings anyways.  At one point, they got totally stuck and I went ahead to run some water down ... when I got to the lock, a CRT chap had beaten me to it - to help a boater coming the other way who'd gotten stuck further along in the same pound we were stuck in.... I got chatting with them and it turns out this was their 6th passage and the worst they'd ever seen it - they too getting off as fast as they could expecting it to close altogether.

When Eddie and Wendy were off again, we continued on foot and did the next couple of locks for them - water levels being consistently low.  Saying our goodbyes, we returned to 'Ellis' and had fish and chips for lunch.  We are already really missing having them around.

Looking at the notices on the CRT website, they have effectively closed the section between locks 7 and 11 (to keep Hebden bridge in water) and also put further time restrictions on Tuel Lane Lock with effect from today (Friday 20th)...  luckily for us, the Thursday closures would not begin until after then which meant we could get a booking to go back down at lunchtime then... subject to being able to get there of course.

With this booked, we reversed down through the lock to the service point and turned in the basin - made more difficult by a boat moored on the services AND another one moored in the winding hole...  no matter,  we managed and set off back towards Sowerby Bridge... scraping our bum all the way.

We took some water down with us in anticipation of a repeat problem on the thin bit between lock 7 and 8 ... a wise decision.  Things got tricky after we came out of 7 as 3 boats (that HAD been stuck over night) suddenly realised they could now move with the water we'd sent down and did  just that - resulting in a bit of a difficult passing procedure - no one got too badly stuck and we eventually managed to pass them... only to find another solo boater stuck slap bang in the middle of the cut beneath lock 6 - he'd been there over night... unable to get to the bank.

I suggested he ready himself for the increase in water level as we descended the lock and try to get moving - agreeing to stay in the lock until he'd come in so as to reduce the risk of both/either of us getting stuck .

This worked quite well. 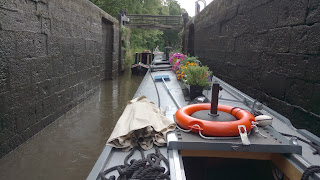 A bit farther along, we encountered the same chap we'd seen on the way up - still stuck but happy to sit it out and wait for rain.  Getting passed him was difficult as there was something under water and I felt the tiller lift up as we eventually went over it...

After another long and hot day, we tied up for the night on the mooring above Tuel Lane lock. 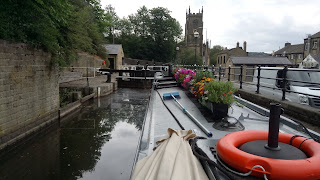 Not the nicest place to spend the night but it was quiet (ish) and at least it's close to the shops.

Another (solo) boater arrived before bedtime and said once he'd seen us leaving Hebden, he phoned and tagged on to our booking.  He'd made it all the way over from Manchester but had also spent a couple of nights marooned in the middle of the cut with no water... he too was "escaping" to try and find some water to boat on.

I got a call the next morning from CRT warning they'd have to delay our time slot due to operational issues - that meant they'd not work us down until about 3pm... not the end of the world.  Anyway, about 3 as promised, 2 chaps turned up, ran some water down through the tunnel and topped up the pound below so we'd be able to get down into Sowerby Basin. 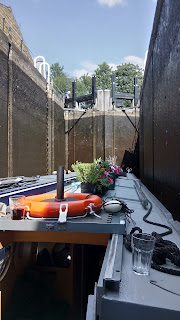 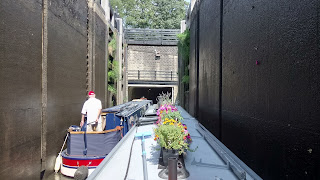 We called in to Shire Cruisers for a pump out, top up with diesel and to buy a new hand spike - the pic-axe handle now looking the worse for wear lol.

Once replete, we chugged back around to the visitor moorings (ish) where we spent last night with a new friend... 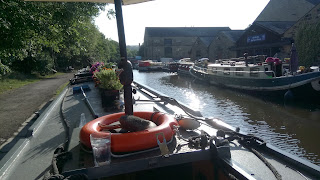 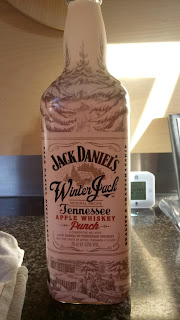 Today's plan is to service the engine whilst Andy has a been of a clean and tidy inside the boat - we're moored in the shade so that should keep the temperature comfortable whilst we work, then after lunch we'll set off towards Brighouse and maybe spend the weekend there.