On route to Manchester on the Calder & Hebble then Rochdale...

After a couple of days back at base doing chores in the house, having eye-tests and general boring stuff, we were ready to set off on our jollies  planned navigation again.

NOT until after Wine-Wednesday - which happened to coincide with a footie match everyone wanted to watch... well I say everyone, Andy and Wendy spent quite a lot of it playing an digital version of Rummikub - which suits me fine lol 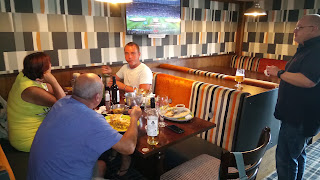 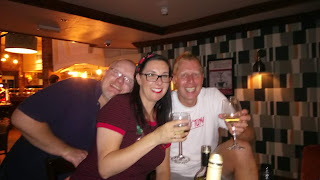 Sally, Lee and myself were having a slight tipple and despite the heat (and poor football result) enjoyed the evening none the less.

Once the hangovers had cleared, we did a diesel run and stocked up the larder before setting of on the first gentle part of our trip.

The first few hours were a bit miserable as the (finally) forecast rain appeared as we chugged up the river to the start of the Calder & Hebble navigation.  This was new ground (water) for Eddie and Wendy.  Once through Wakefield centre and up to broad cut, we noticed how low the levels were -

The gates at broad cut really do leak badly now but a bit further on, the towpath is where the money is being spent - it's a bit worrying .  What's the point in a good towpath if boats can't move around or moor up anywhere? -... I'm beginning to wonder if therw really IS a hidden agenda to close the canals to boaters???

ANYWAY  - we chugged on nicely (if shallowly) enough for a while and due to our friends being 60 footers, had to trial and error as to whether we could share the locks.

All went well and we moored for our first night in Mirfield...

Next morning, we carried on and all went well  until we got to Kirklees low lock... it was here we had to do the lock 1 boat at a time again but just as Wendy and Eddie were coming out, 2 boats appeared up stream so they would come down in the lock as it emptied... trouble was, unbeknownst to us, the shorter boat was a springer and a bit fatter than it should have been - ergo, due to the gate not opening fully, they got wedged against the hire boat (who incidentally were a lovely bunch) 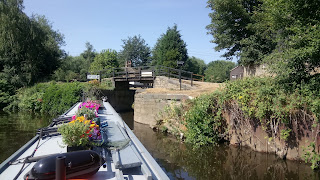 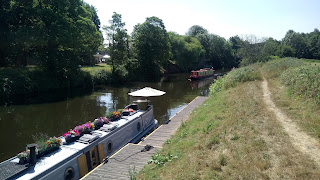 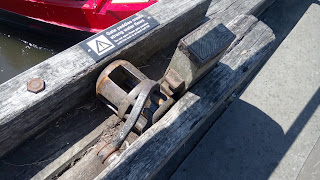 To make matters worse, only 1 of the stupid spike thingy paddles were working...  ergo, it took an age to refill - move the springer to the other side and then empty it again .... the hirers HELPING but the "owners" doing as little as possible. 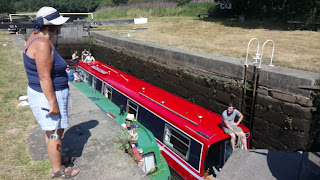 Anyways..  eventually we plodded on through the now burning midday sun.  I can't believe how hot it gets lock-wheeling. GENERALLY, I skipper and Andy does the locks but we had to have a change of roles due to an incident with the hand spike... the day before at Shepley Bridge lock, he'd been careless the ratchet thingy on the gear handle hadn't properly engaged, which resulted in the spike smashing into his face - lucky just a bruised eye and no missing teeth but it could have been much, much worse.  ERGO, "hand spikes" are now a DARK BLUE job.

It'll be good for me though as I have piled the weight on.  The water up there was still quite low but perfectly navigable... 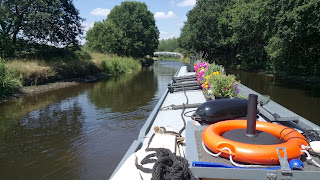 Before long we were tied up on the river as Andy emptied the lock into Brighouse Basin. 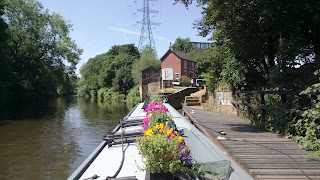 As we continued, we had to take some locks 1 at a time and hold ropes diagonally on their boat - space not being so much of an issue as the stupid walkways over the locks.... you can see lots of other boats have not taken so much care and smashed bits out of them with their swan necks. 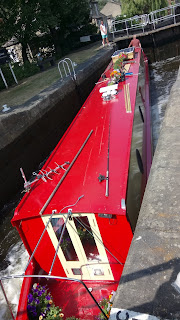 Having said space wasn't always an issue, on Elland lock there really was nothing to spare! 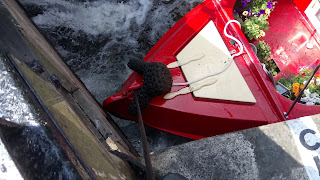 We ended this day a couple of locks away from Salterhebble basin.

Next day, we went through the guilloten lock and up into the basin. 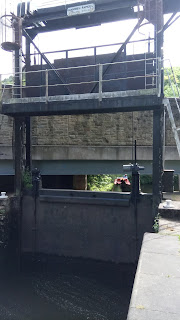 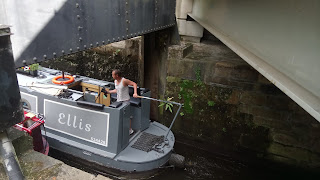 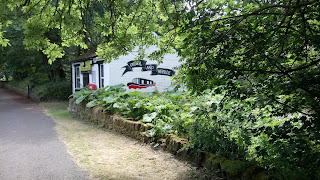 Next we had the shortest lock we'd encountered which necessitated removing the rear fender off Memory Maker and doing it one at a time again..  less than half an inch space to close the gate.

Once at the top, we bumped into Carmel & Nigel on their boat - they're friends of John and Rachel on Morgenster who used to moor near us and now are in York...  We were VERY impressed with their handspike that John had made for them - certainly compared to ours lol 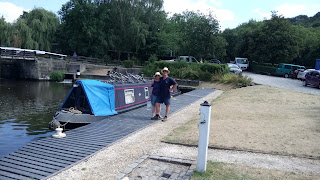 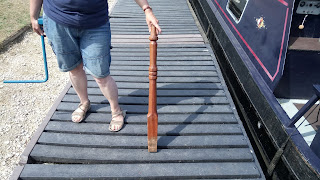 Once at Sowerby Bridge, (where the Calder and Hebble finishes) we swung a left and began our ascent at lock 1 on the Rochdale.

Luckily, it was Sunday and no pre-booking for Tuel lane lock was required.... which was  a good job. 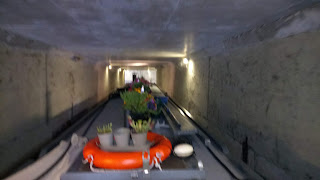 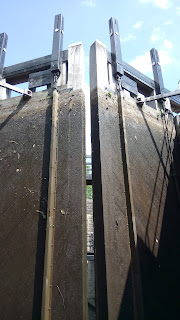 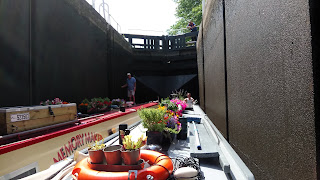 The lockie insisted we loop ropes front and back through the risers which to be honest, was a pain in the arse overkill.... Lemonroyd is MUCH scarier.

IT was at the top that we discovered all was not rosey on the Rochdale... ergo, there was not very much water at all... 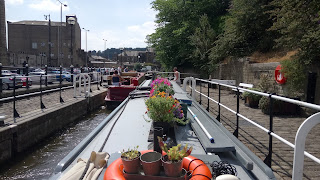 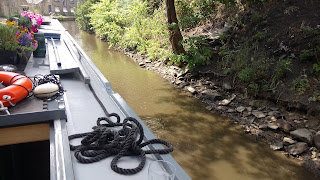 There REALLY ought to have been a sign at lock 1 saying "closed"...  we were to have this confirmed the farther (further?) we went on.

AFTER 3 hours  doing half a mile an hour, we gave in and made an attempt to moor in Luddendford (excuse the spelling)... it was SO shallow and we'd spent so long trying to pole ourselves off being stuck, we'd had enough. 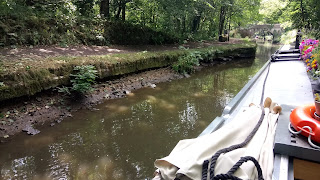 We ended up having to double breast for the night and all had a glass or 7... in Andy's case, this extended a bit more and he insisted on playing in the park when all the kids had gone to bed. 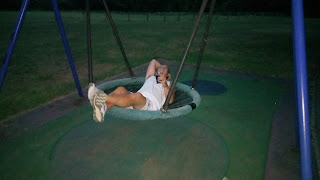 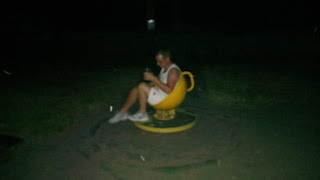 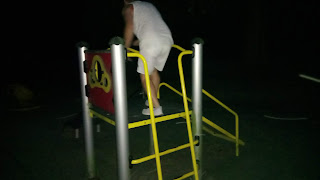 I suspect there will be a hangover to follow.

Quite surprised the Rochdale hasn’t gone on to being closed a few days a week to save water, like it did last year. With the L&L closing at the end of the month you could end up being trapped in Lancashire, a scary thought for a white roser.