And we're off....Wakey to Ferrybridge to Selby...

Before we could leave, it was a morning of chores: a pumpout, trip to the chemist to collect the next 3 months prescriptions and a haircut were all among the excitement (not).

We left Wakey on Monday  about 1pm and headed to Castleford to break our journey... In Castleford, at the visitor moorings, I spotted a fellow tweeter's boat: "On a Whim"... they'd been up in Wakefield the other day and experienced the same annoying generator noise we had whilst on the visitor moorings... sorry to say, they'd moored opposite the inconsiderate soul who was running his generator until 11.30 the other night when we were in Castleford  ... I hope THEY had a quieter night than we'd had! 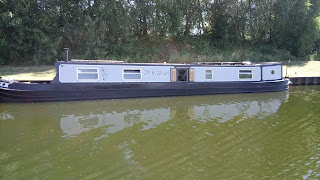 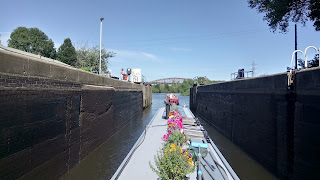 Upon arrival, consensus was that we'd go on to Ferrybridge and stop for the night as it was still early.

The river once through Bullholme lock is wider than we're used to but it was a pleasant journey down to Ferrybridge (I can't recall whether that should be one word or two) - Still, Tilly the duck was enjoying her water-skiing lesson ;-) 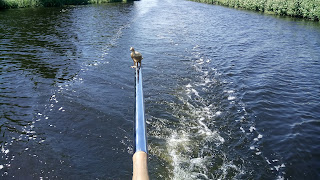 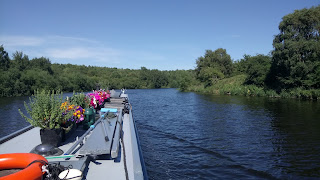 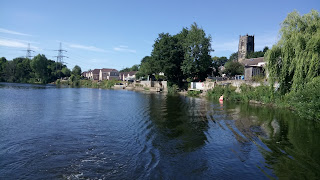 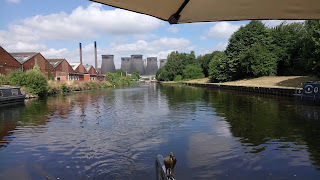 Having arrived there around 4pm, we moored for the night and had planned sitting on the towpath watching the world go by.  The resident insect life had other ideas.  Talk about being eaten alive.  My left leg is bitten to buggery AND to ad insult to injury, one of those blister causing horseflies even had a go... grrr. 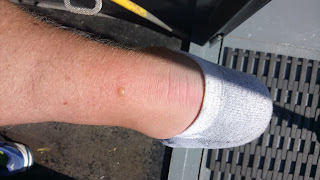 Our plan for yesterday was to get to Selby and wait for our (just booked slot) on Wednesday morning.

The journey began easily enough along Ferrybridge cut and all was fine until we arrived at Bank Dole lock.  Another boat was already waiting to go in and as we spotted one following behind us, we pulled in so they could pair up.  Feeling benevolent, Andy and I worked them through what must be the heaveiest gates we've encountered thus far. 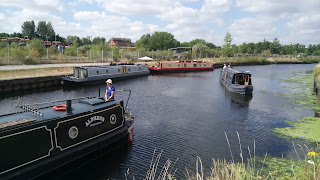 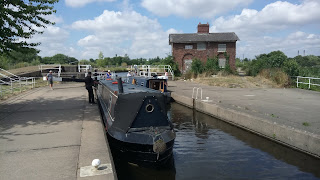 When they'd gone, we filled the lock (slowly) and took our places.

Eddie and Wendy went out first and our plan was to come out slowly and edge on to the stupidly placed pontoon.  All would have been well if at the critical lock exiting moment, I hadn't gotten a duvet wrapped around the prop - stalling the engine.

Quick thinking managed to wedge the boat behind the other closed gate whilst I removed all this from the prop. 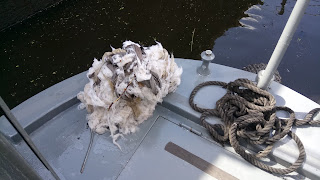 It was fair tangled up but after about 20 minutes of faffing, we were good to go.... the same can't be said about the next maneuver to get back to the landing stage - least said about that the better lol. 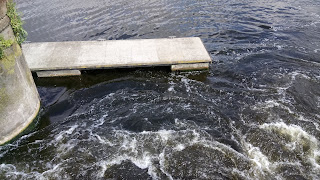 Our journey down stream was enjoyable though...  we even encountered "Lady Teal" - a proper Hotel boar, who greeted us with a friendly wave and asked where we were going. 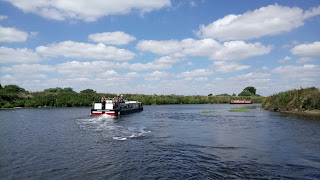 The cattle were enjoying their impromptu beach day though! 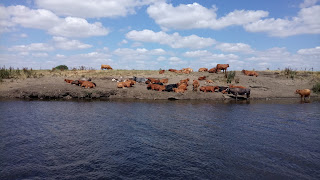 As we turned on to the Selby canal, the scenery changed and weed was abundant... it's a lovely chug but you can't stop anywhere (there are a couple of mooring points but they had boats on them).
Tilly was a bit confused - AS were some more cattle who clearly mistook the weed for grass! 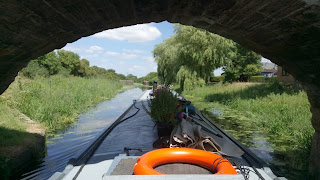 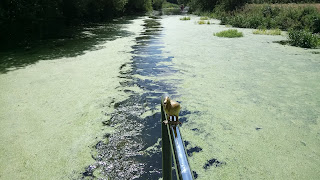 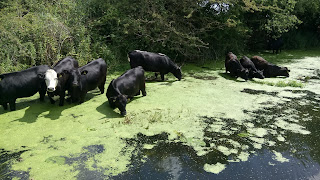 On arrival, rather than risk the basin (which turned out to be a good idea given it was full) we tied up just before the swing bridge and then had a wander. 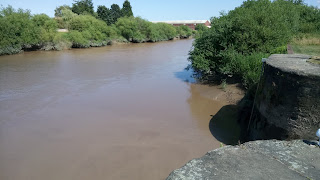 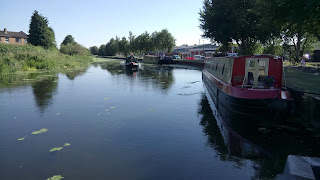 You must be jinxed as we have just had a notice from CRT to say that levels on the Ripon canal are very low!!