Travel by Train (s)... call to prayer and a family visit.

On Thursday, I got a call from mother who rather excitedly said "I've someone here to speak with you"... the next voice I heard was my fathers - he'd been allowed home.  It was such a relief to speak to him after all this time...  he's a man of few words anyway but to know he was home - al be it in a much reduced capacity, was such good news.

Having thought about it overnight, we decided NOW would be the time to pay a visit - to be able to do something practical perhaps AND to see for myself how he is.

SO - First thing Friday morning we set off to the station having worked out a route involving 3 trains, a taxi and a drive.  In theory, we'd catch a train from Appley Bridge to Manchester, Manchester to Leeds and then Leeds to Wakefield.... We KNEW it was going to be one of those days when on arrival at the station to pick up the tickets, some men in hi-vis appeared and began dismantling the machine - to replace it with a newer one...  luckily, they allowed us to print ours out first.

RMT had other plans for us though and what with one thing and another (and by that I mean announcements we couldn't hear on the train apologizing for something or other) we missed connections and had a bit of a scramble.  I can only presume drivers weren't in the right place due to the previous days strike. 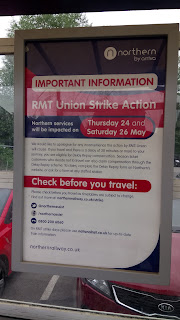 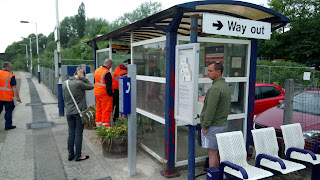 When we eventually got to Wakefield (to collect my old banger) it turned out we'd arrived at JUST the wrong time to get a taxi - none of the firms could send one to the station and Uber kept going in loops trying to locate one.

After about 20 mins of trying, we gave up and set off on the 2 mile hike in the rain...  neither of us wearing coats because we're stupid when we'd left, it was a nice sunny day.  On route back to the mooring (where the car was) we walked passed Wakefield's central mosque and then it clicked WHY we couldn't get a taxi - they were all parked in there doing their thing.  *note to self PREBOOK in future*. No matter, half an hour later we had the car started and were setting off on the 75 mile drive.

We'd planned to check into the hotel after visiting parents but as time was getting on, we called in on route to dump our bags.  If you can imagine Faulty towers meets crossroads motel you'd have an idea of how that was - suffice to say, we'll not rush to stay there again.

Anyway, some 7 and half hours after we'd left the boat, we arrived at my folks .  It was a relief to finally see dad  - He's still very poorly and has a long way to go but he's proven he can just about manage personal care - including carrying around an electronic pump, about the size of an AED which is removing (for want of nicer word) "gunge" from the cavity in his stomach - 24/7 and the district nurse is calling daily to change the filter/dressing on an open wound about the size of a grapefruit.

He's made of strong stuff but I could see how exhausted he was.  Still adamant he can manage but whilst on his own he probably can, mother also needs help as I think she's also suffered another mini stroke recently which has worsened her balance problems...  DAD is under strict instructions NOT to even try to help her up if she falls, and instead press the red button to summon assistance.

We had a bit of a tidy up for them as whilst he'd been away, mum has been on auto-pilot with laundry and clutter building .   After a couple of hours, we departed and promised to return the following morning with some shopping .

Saturday morning we went back and continued with a bit of tidying/decluttering and whilst we were there, a friend of theirs appeared and went in to house-keeping mode too.  After a fish and chip lunch, we left  and began the return leg to the boat.   The plan had been to dump the car back on the mooring and get the train back to the boat...  however, as this day was a "proper" strike day, that journey was going to involve 4 changes of trains.  We abandoned that plan and drove instead but it being bank holiday weekend, even that took over 3 hours.

On arrival, we met Wendy and Eddies daughter, husband and two kids who'd come to stay with them for a couple of days.   An impromptu (well for us) BBQ was organised and we ended the day watching the sun going down, being bitten by midges AND of course playing that ruddy board game again. 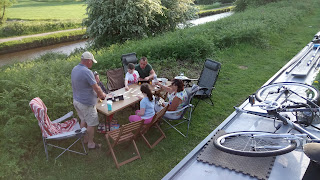