Tarleton to Burscough on the Rufford Arm...and 2 extra trips created on the Liverpool Link...

Sorry I've not updated this for a few days - we've been busy saying hello (and goodbye) to Brian and Marilyn who joined us in Tarleton for a 2 night taster... they weren't sure if boating was for them so rather than jump in for a week, asked if we'd let them stay for a couple of nights instead.

It worked out rather well and whilst they were camera shy, they did muck in and treat us (AND the boat) as old friends... just what we were hoping for.

After a lovely few days in Tarleton (it really IS a nice town with the best diy store you could ever want) we left on a cold and VERY windy day for our trip back up the Rufford arm .

Wendy and Eddie came with us to share the locks/swing bridges and whilst the wind did it's best to twang both boats into trees at every opportunity, the skippers managed to avoid any major incidents.

Ahem - that's not to say one of us (*whistles innocently*) didn't pull a wide-beams pins out as we went past it in the strong winds... 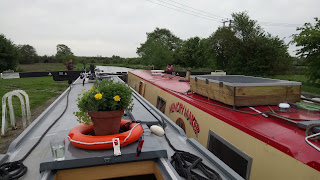 The lock landings on this stretch are practically non-existent... certainly not much use for narrow-boats. 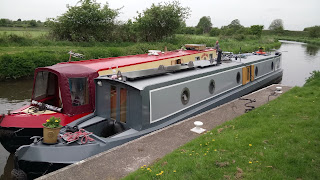 If you look to the left, there is also what looks like a "squared off" concrete support block that's been built "just under the water's surface" - that you can catch the front of your boat on VERY easily! 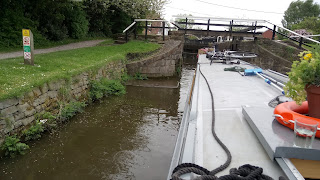 We tied up just outside Burscough for a few days and utilised the Tesco store (a short walk to the right over the bridge) AND another first for us, was tying along side a fuel boat and filling the tank. 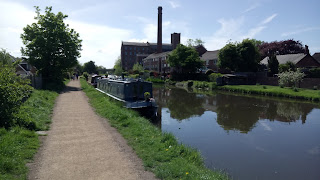 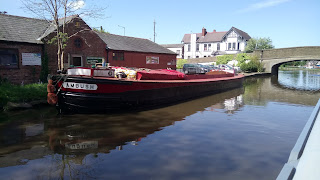 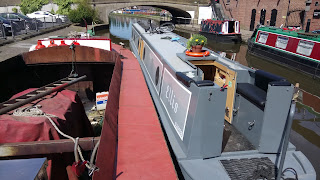 They couldn't have been more helpful and friendly... we even left some leaflets with them as they mentioned they often get enquiries about boat trips etc. so who knows, perhaps we might pick up some guests as a result at some point in the future.

It was 80p a litre for domestic and I was amazed JUST how much the webasto had gotten through of late.

SOME ginger idiot optimistic skipper, decided that it might be an idea to try and turn the boat just under the bridge - RATHER than risk passing through the recently faulty 2 swing bridges to the "proper" winding hole...well it LOOKED wide enough at the start of the manoeuvre... SUFFICE to say, it wasn't and a load of pole-ing followed, along with a few expletives from the crew that I can't even spell!

An hour (and the aforementioned swing bridges) later we were back in the same place pointing the direction of desired travel.  Eddie and Wendy had waited for us to catch up - they'd bought diesel whilst we were filling with water. 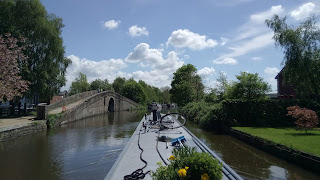 We went through Parbold and up Appley NEW lock- before reversing down the cutting to the (now disused) old lock.  A lovely lay-by (for want of a better word) in full sun for the solar panels where 3-4 boats can enjoy a few days away from boats speeding past - like they all seem to do around here...

AS the sun was out, the bbq came out again too. 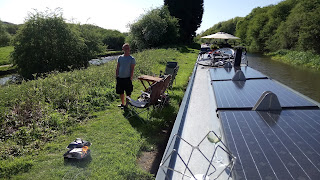 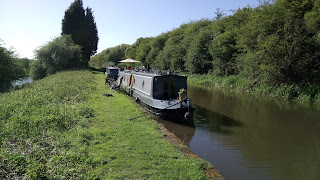 It's a smashing place to moor up here... sssh... don't tell too many people as we intend to come back again next time we're in the area .

The only "down side" to being here is the phone and internet signal is rubbish NOR is there a TV signal.    Oh well.. you can't have everything.

This morning, we've been through Appley Bridge to the nearest water point to top up the tank - early doors though so as not to lose our space behind the other boats here.  It did mean an interesting turn and few hundred yards reverse around moored boats to get back in but the wind was light so for a change, nothing went wrong - in fact, I even made it look like I've done it before!

We're going to organise another Asda delivery for heavy items... to include a new bbq because the orginal one appears to have been crushed by something anchor related...

Thanks so much for all the well wishes re. my dad.  The many offers of help have been greatly (and humbly) appreciated.

He's still in hospital but he's definitely on the mend (albeit slowly) and once some support/care package can be arranged for them both at home, they will consider releasing him to mothers care.

Luckily, he's got siblings, grandchildren and local nephews/nieces all of whom are rallying round like troupers - even my brother is "doing something" to help out...  and whilst it's felt very frustrating being so far away without transport (other than a 3-4 hour train journey with 3 changes), it's good to know they have support... ALL of which is also greatly appreciated.

Ooo - before I go, as we've not had any bookings for our journey from Wakefield to Manchester (via the Rochdale canal) we've altered things and created 2 extra shorter trips to include the Liverpool Link at the end of July.   10 a and 10b (in and out)
http://www.narrowboatellis.com/10-a-2018.html

It transpires that 2 other boaters we know from the Thunderboat forum are ALSO going to be in the docks... booked into the next pontoon to us ... SO it looks like a ready made party on arrival.