An aborted Trip to Aintree, pubs running out of food and we're in Tow-Path Talk!

I admit - that's a poor post title... it'll have to do as my brain is a bit busy at the moment.

OK - it's been 7 days I updated this... a busy week.  We said goodbye to guests ( actually I don't like referring to them as that cause after a day or 2 on board, they become friends I suppose)... hmm - 'will have to give some thought for future referral...

We'd deviated from the planned cruising schedule and decided to go as far as Aintree then return to 'safer' lands...  unfortunately for us, the black water tank decided to create a problem that necessitated an earlier than planned pump out.  This meant a long days chug to the only place we could empty the tank without going back down the Rufford arm 7 heavy locks) and not much time to do it before the marina closed.

Scarisbrick marina was our only hope and we got there with about 15 mins to spare.   The old bloke who came to do it was a smashing chap... and unlike a lot of marinas, this one has SO much room in to maneuver in - that didn't mean a text book turn btw... in fact, what with the wind AND an large audience enjoying the sunshine, it went totally wrong.  Enough said about that I feel.  NO MATTER, we got pumped and rinsed out AND filled up with water for only £15 - bargain... that's less than the self pump out cards sold by CRT. 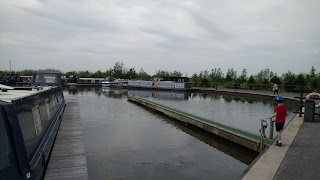 If we ever think about going into a marina, this will certainly be on our list.

We'd expected to be able to get back to where we'd been moored so had left the reclining chairs AND a line of washing out...  it dawned on us that was we half intended coming this way the day after, we'd phone Wendy and Eddie and ask them to rescue the chairs and laundry - secretly hoping the latter would come back ironed lol..   They did so and decided to head the same direction.  They arrived where we'd tied up early evening and a mutual decisions was made to go to the Saracens  Head pub, Halsall (about 100 yards away) for tea.... It transpired the'y just about ran out of food (this was 7pm ish) and only serving people already seated.  Fate was obviously on our side when we checked the prices however so we dodged a bullet there and Just Eat to the rescue with a local Indian takeaway delivering to the boat 40 mins later.

Next morning, bright and early (for Wendy) we set off towards Aintree...  it's actually quite a nice bit of canal - all be it a bit full of reeds in places and we had a lovely chug in the sunshine... 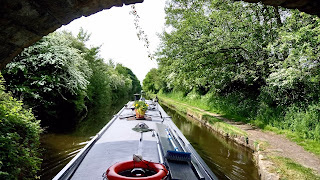 This bungalow (well it was once) tickled our fancy with the frog band on the roof...

HOWEVER, a short while late, we came across a hopped floating lose in the centre of the canal - Wendy and Eddie were ahead of us and it didn't move when they went passed... we were not so lucky and it then ended up diagonally across the cut.   We COULD have left it but being idiots community spirited , we felt we needed to secure it...SO - nothing else for it but to back up, climb on board and try to move it...  suffice to say, it was blooming heavy and given the depth of the water, it took some shifting to the side... by which time 3 other boats had turned up behind it to watch 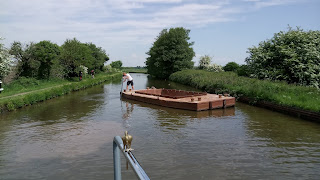 ... no pressure then!  Half an hour of hard pushing and pulling later, it was finally tied up safely out of harms way. 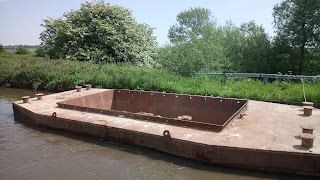 We continued on through Lydiate and Magull 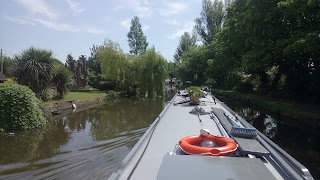 and decided to wind just after Melling to save waiting for CRT to unlock bridge 9... this being as close as we've gotten to Liverpool for this trip and therefore Aintree was aborted . 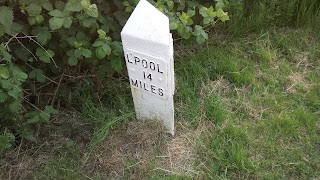 Once tuned, we retraced out steps (chugs) and then up in Lydiate for a few days.  It's actually quite a nice place where most homes have embraced the canal with loevly gardens... which of course we get to have a good nosey in as we chug passed lol.

A quick pint (or 2) in the Running Horses pub later, revealed  knowledge of a classic car meet, taking place at another pub about a miles walk away - which we went along to later on.

Can't for the life of me rememner the pubs name but it had a thatched roof and was I believe the oldest pub in the country... outside toilets and all. 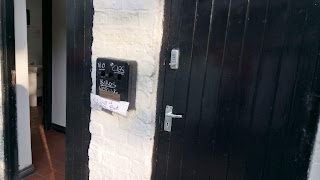 We spent a couple of nights here (not the pub) and then set off back - the plan being to get back to Appley Bridge for the bank holiday weekend.  ON route, we broke off for a night near a no longer used swing bridge and not long after we'd tied up, a kid road his bike straight into the canal in front of us - his dad leaping in after him on auto pilot... complete with phone in pocket.  It was quite deep as the kid disappeared with his bike and the poor father had a heck of a job getting the bike back.  I thought poor taste to photo this - instead rushing to their air with towels and a bag of rice for him to try  save his phone with... no idea if it worked but they did appreciate the towels.

Andy got it into his head we should have some more plants on the roof to obscure the captains line of vision even further give the boat some colour .  SO, with that in mind, we got up VERY early and made a 6.5 mile round trip to a Home-Bargains he'd seen on google maps to buy planters, compost and plants...  The walk took us passed this old tin church and through rush hour traffic ! 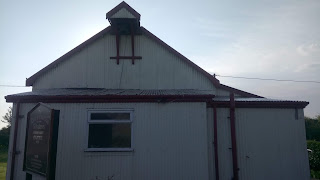 Once back on board, we chugged on to Burscough to fill up with water and supplies before returning to Appley lock where we moored again, the washing came out, planters got done and that bloody Rummikub came out again! 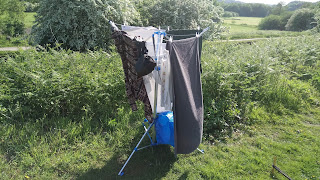 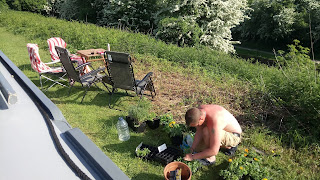 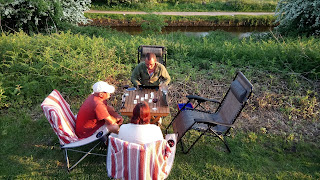 We're in June's Towpath talk... I'd forgotten all about the interview I had with a journalist a while back... luckily I'd not said anything TOO stupid.  You can see the article here:  https://app.towpathtalk.co.uk/2018/05/23/the-wet-web-13/content.html

or pick up a copy canalside somewhere..

I had no idea you were running a business on your boat! Amazing and lovely. I wish you both the very best.

Thanks Jaq - it's not really a business... it's a way to do what we love without having to have a proper job. The website pretty much gets that message across (we hope) lol. x