Whilst we've been spending  a few days in Tarleton, I noticed the engine hours approaching a 400 hour service flag (its oil,oil filter and gearbox every 200 and every 400 add in a fuel and air filter....)

BEING Mr. Organised, I'd already got everything required in stock somewhere on the boat... it was JUST a case if finding it!

Once I'd used my mind map *read opened every cupboard,drawer* I remembered where I'd put them and set to in the engine bay.

THIS time taking more care and thus NOT knocking over the oil drained from the gearbox. 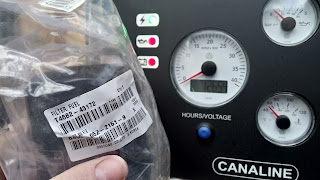 I'm getting faster at this now and doing the fluids and filters took me less than an hour - AND I remembered to take a sharpie marker pen to the appropriate sized sockets for the gearbox drain and filler plug... to speed it up further next time.

We're TRYING now to utilize the webasto of a morning for hot water and let the solar panels do all the charging when we're not moving - it seems to be working ok... so long as we're moored in the sun.

Since we've been moored near Wendy and Eddie (I always want to call them weddy and endy for some reason) we've enjoyed a few (too many) games of Rummikub and have shared evening meals with them and as the sun was shining, we set to and had our first BBQ of the year.

The wind direction was not very consistent and we ALL ended up suffering mild smoke inhalation as a result. 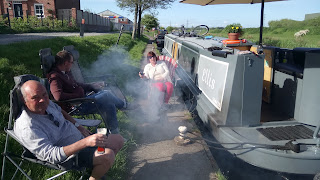 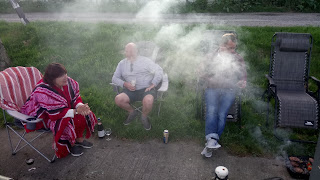 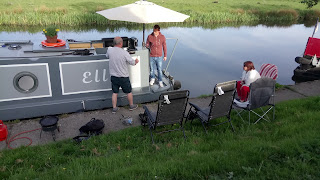 AS usual  can sometimes happen when I'm hungry, I started cooking a bit too early and nearly put the thing out... resulting in Eddie being instructed  offering to get their gas BBQ out to "finish" off any meat that might kill us...  it ended well with one exception - we'd retired to their boat to play rummikub (YET again) and rather than locking up fully, I'd just put the quick lock on... ONLY to discover my keys were in the ignition and Andy's were in his pocket... INSIDE the boat!!!

There was only one thing for it - I borrowed Eddies "master key" and broke in. 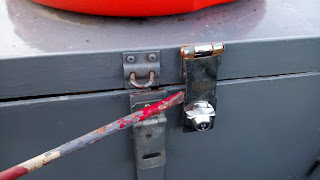 Suffice to say - BETTER security arrangements have been made and I'll update on them in due course.

MEANWHILE - Father continues to improve in hospital and whilst my folks are under no illusion things are going to be easy, mother was certainly up beat and very positive about looking after him when she eventually gets him home.... WITH whatever help they need from external support services they require.