Sunday dinner for 5 at Foulridge, then Barrowford and Rose Grove...

Where were we? - Gargrave.  The water dropped a bit during the night but not enough to cause problems... bright and early (ish) after a lovely Banana pancake breakfast (they seem to be a hit) we set off for Foulridge on what HAD to be the coldest and windiest day for a long time...

We'd quite a bit of ground/water to cover (for us) but we wanted to end the day at the eastern side of the tunnel.  Leaving Gargrave and heading up through Anchor lock, we were a bit disappointed to see the lock landing is STILL in the same state as 2 years ago .... 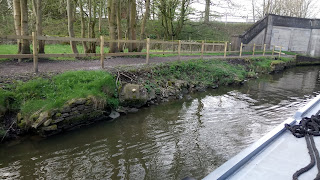 As we climbed, we soon bumped into (not literally) another hire boat with a couple on who are in the early stages of planning//searching for their own dream boat.  They were going to stop and have breakfast but decided to come up Bank Newton locks with us. 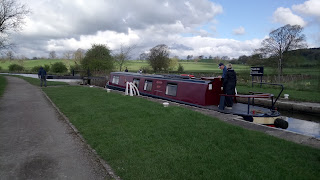 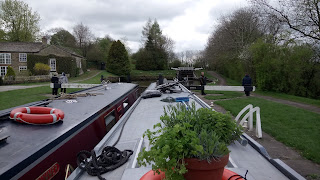 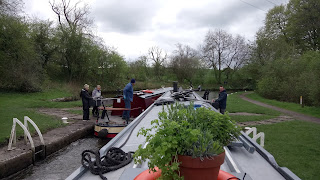 We'd forgotten there was a lock keeper on duty to help work us up through the locks so it took no time and once at the top, our new friends stopped behind whilst we continued.

The scenery up here is lovely  though - with lots of winding turns - sometimes doubling back on ourselves.  Of course you can guarantee you'll not see  another boat UNTIL you are traversing (if that's the right word) a hairpin bend and then it's everyone in reverse and bracing themselves for impact...

WE were just pottering along but the few other boats we came across really DID seem in a hurry.  One of which really took um-bridge when I (whilst talking to the boat in front of her) might just have caused her to deviate from her desired route in order to avoid us kissing - she was travelling flat out though and although I can't repeat the words she bellowed in my direction, suffice to say I'd be a contortionist if I could do HALF the things she suggested.

By the time we'd gotten to East Marsden  (I think) we'd practically forgotten all about the earlier hostility AND spotted a first for us.. a Guinea pig hutch on top of a boat - WITH the door open but the aforementioned creature happily munching away in side. 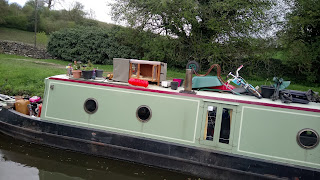 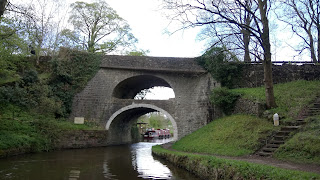 When we pulled into for water later on, Patty shared a bottle of bubbly we'd bought her as a "thank you" for being our first booking earlier in the year. 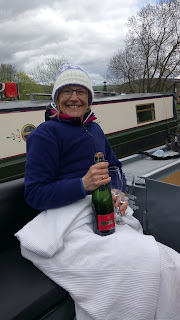 When we moored at Foulridge for the night, we were really pleased to see a boat we recognised AND had the opportunity to meet in the flesh a couple we've chatted with on the on-line boating forums.  Roger and Jane off Paneke 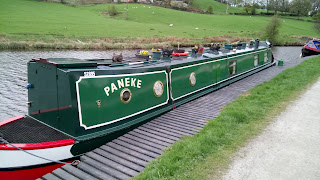 They very kindly invited us on-board for a drink and natter - sharing out some lovely Gin (people may get the right impression of me if I'm not careful here) and as we had a Sunday dinner cooking, I kept nipping back and forth between boats to turn roasties etc. 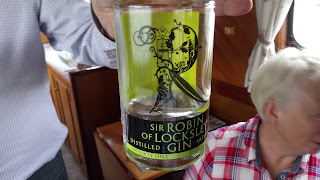 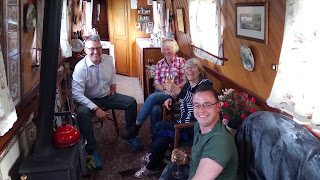 Sir Robin of Locksley was my favourite... MAKE A NOTE OF THAT please dear reader!!!

On auto pilot, I invited them to join us for dinner and a short while later, we re-located to 'Ellis' where I dished up a reasonable Sunday roast - FOLLOWED by the apple-pie leftovers from the day before.  A lovely evening spent with lovely people.

NEXT morning, we topped up the water tank and headed through the tunnel.  I STILL don't like tunnels bit whilst Andy and Patty sat at the front, I had my Carpenters CD playing loudly at the back to soothe my nerves. 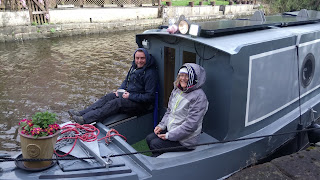 It only took 18 mins to get through and once out the other side into bright sunshine, we were soon heading down Barrowford locks... in the strongest most windy conditions you could imagine... to be honest, it was a bit of an endurance for all of us.  Still, you take the rough with the smooth.

Our descent was made more unpleasant by the grass cutters working at the same speed we descended...  meaning lots of shouting at each other in locks AND frequent faces full of grass clippings. 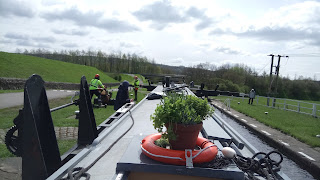 As we got to the bottom, we plodded on in now calmer conditions and spotted an oil recycling point by the canal which will be handy on our way back... we're due an oil change in about 60 hours so I can keep hold of it to deposit on our return from Liverpool. 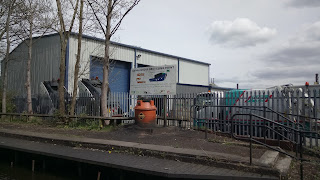 We'd planned to moor around Nelson so Patty could catch her train the following morning but we took a vote on it (looking at the area) and decided to continue a few hours and stop at Rose Grove instead...  a good decision judging by some of the sights we saw 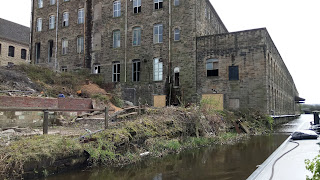 We DID come across an interesting child transportation method - 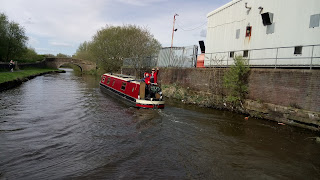 QUITE secure though, with ratchet straps holding down the bed carry cot thingy or whatever it's called.

Our cruise ended at Rose Grove services where we tied up for the night  in their secure yard and we escorted Patty to her train this morning.

The end of a lovely week - despite the weather.

When we came through in 2012 (see http://takefiveboat.blogspot.co.uk/2012/08/burnley-embankment.html) we paused at Rose Grove for lunch as well as the services. A trip to the shops introduced us to sad cake - I recommend that you investigate if it is still available from there and consider using it as a novelty/local colour for your guests.

It was a wonderful meal, onboard a terrifically luxurious and comfortable boat.

You should be very proud of the quality and finish you have achieved with your fitting out.

You and Andy make a terrific team, and are brilliant hosts.

Anyone following this blog and thinking of booking really should do it.