Appleby Bridge to Parbold and then "STOP"

Sorry for the absence - we've been touching up the boat and I've been spending  a lot of time on the phone  to the hospital and mother.

Father wise, he's still in ICU and has some kind of infection but had another scan last night and the surgeons said they can begin to eat again now and see how things go - it'll have been 8 days since he had any food.  When I speak with the care team each morning, they fill me in on the bits mother forgets... old age isn't kind is it? - STILL, he's in the best place and from what the rest of the family tell me,  is receiving excellent care with each patient in icu having a nurse at their side 24/7.  WHEN he begins to get stubborn, we'll KNOW he's on the mend proper.

So - we left the country mooring and set off towards Appley Bridge where phone signals were better.  On arrival, we tied up a few hundred yards past the pub and turning point.   It's a lovely place.  Busy with dog walkers but unline Wigan, 99.9 % of them actually pick up the poop and bin it - SOME even coming down from the road to the bin to deposit it!

On reaching the lock ahead, we encountered a bit of a traffic jam - the boat at the front being unable to open the top gate - sighting a leaking bottom paddle as the cause.

Andy is good at organising stupid people getting to the bottom of a problem so went on ahead to get things moving again... before long, the bottom paddle was properly closed and the top gate able to open... 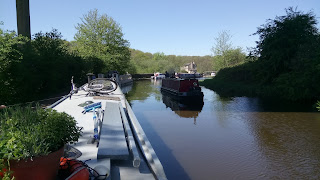 When it came to our turn, we paired up with a grp that had pulled in behind us... we needed to stop at the water point at the bottom of the lock anyway so it was lucky that no one else had done so.  NEXT time we're here, we'll pull up along side in the now disused big lock landing and drag a hose over the bridge rather than going down/up the lock to the tap if you follow. 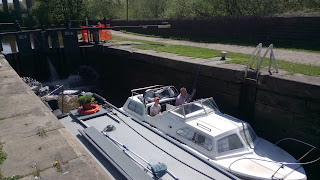 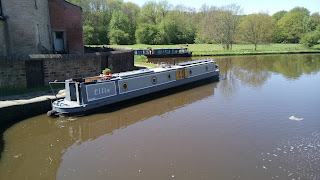 Itls lovely around here - such a contrast from some of the areas we've passed through to get here.

There's even a floating Tea-room. 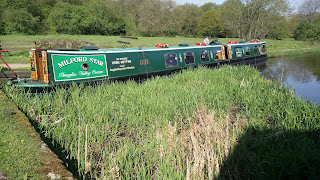 Once at Appley Bridge, we went looking for a shop for bread.  There are 2 here - Cost Cutter (which REALLY is an oxy moron) and a SPAR... BOTH of them involve a walk up a steep hill  - in our case, in scorching heat. Still, at least returning was easier. 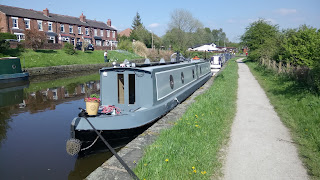 Given we still have a few days before we pick up the next guests (back in Wigan) we've been doing those jobs you put off - such as cleaning out back lockers & repainting the seats above them. 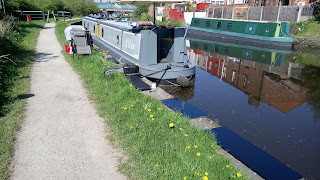 Having walked up the hill twice, we decided to check out on-line deliveries and whilst here, used the post code of the cottages the other side of the bridge.  A time slot the following afternoon of between 2 and 4pm was perfect.  SO we moved a few hundred yards and about 1pm got a phone call to say he'd arrive about 3pm.  True enough - bang on 3 - he turned up and delivered through the side hatch.  SO much easier than lugging things back to the boat. 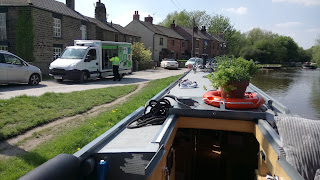 Shortly after we set off towards Parbold where we moored on the visitor moorings for the night - they're only 24 hours but I have a feeling people ignore the sign-age.  Still, no skin off our nose. 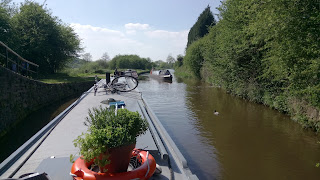 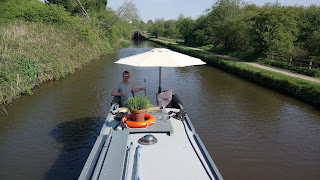 The people of Parbold have certainly embraced the canal with lovely gardens and a well used tow-path... also for the most part, clear of doggy do. 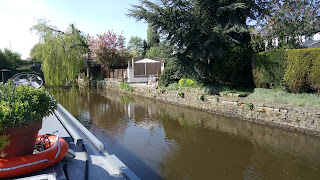 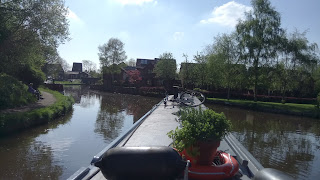 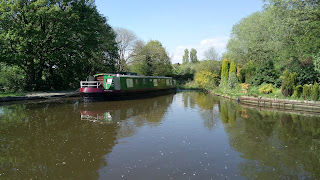 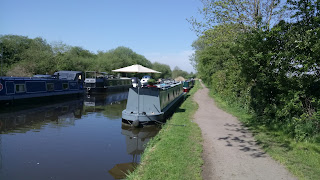 On leaving the town, we headed off towards the Rufford Branch (which goes up to the Ribble link) .
There is much more boating traffic around here than we're used to.  All nice to see even IF most of them are going too fast passed moor boats for our liking - and it's the oldies that are worst!  NOT even hire-boaters either....

We'd planned to get water here but when we arrived at the (well hidden) water point, some fool in a grp had left his boat tied up on the point and gone off for a walk!  - I did grumble a bit but squeezed in between him and another boat and had to dig out the "long hose"...

Once full, we continued on our way to Burscough and deposited rubbish in the (also quite well hidden) refuse point near the Jack and Gin pub.  Nice place with lots of people enjoying the canal and weather.

Our plan HAD been to chug on, turn and then come back there for the night before exploring the Rufford arm this morning and meeting up with friends in Tarleton at the top.

Hmmf - 1st a swing bridge with flat batteries had us "stop" for 2 and a half hours whilst they trickle charged them ffs... THEN no sooner had we gotten through that one, did the NEXT one break... 4 and half hours later we abandoned the day and are still on the bridge landing with 6 other boats who are ALSO stuck.  CRT on this occasion NOT being very good at communicating - YES they did send a few chaps out ONCE the barriers had come down (thus blocking the road) but even when they managed to get it open (the bridge for boaters that is) RATHER than calling us all through before closing it and then lifting the barriers, they left us all here - packing up and beggaring off home about 8.30 without a word... When I called over to them "is that it?" - I got a very curt reply suggesting people who need to be somewhere, should get a taxi.  ALL we expected was one of them to walk down and explain that  now the road was open, (and  bridge safely locked in position) we'd have to wait until another team could come back tomorrow.

I'm not usually one to moan about CRT but on this occasion their "customer care" from at least 1 of the men on the ground, really was not up to scratch.  I know he'd probably had HIS bank holiday spoiled by having to attend but at least he'll have been getting paid - the rest of us have lost 7 hours of boating.

Of course, despite the promise to be here at 8am to try and resolve it, here we are at 8.45 and no sign of anyone.  Pants.  Looks like we might have to reverse a mile or so if we are to get to Tarleton today. - Hmmf!

Until next time - NB Ellis... trapped at New Lane swing bridge.
Posted by Quaysider at 08:45