As in the euphoric type rather than repair...

ON Saturday morning, because I wasn't working (we are so far behind with the racing track it's futile to even try and meet the delivery deadline - instead we're opting for the 195 quid per day late fine), we arranged to have a trip over to Gawsforth to see Eddie and Wendy...  sorry, rewind...  late last year, before we placed the order for the boat, I asked on Canalworld forum if anyone had experience with the company we had in mind.

As normally happens, the posting went wildly off topic so I stopped checking..  I then received a message from aforementioned, who confirmed they'd recently taken delivery of their sail-away.

They very kindly extended an invitation to go and take a look at their boat - which of course we jumped at...  this was over the Christmas break.

Fast forward to Friday last week (when it was confirmed Saturday would be a free day) I dropped them a line (you never know who is reading so Eddie gets the occasional cyber kiss - he's secure in his sexuality I presume as he never grumbles) and we arranged to go over.  I'd like to claim I baked a cake to take with us but that would be a blatant lie - I did however spend 2 of my finest pounds at the coop, selecting what I thought would be a lovely orange cake ... it was horrible apparently - we wouldn't know as sharing it out didn't appear to an option ... ... ... :-)  To give Wendy due credit, a bacon sandwich WAS offered though.

They've got a lovely mooring 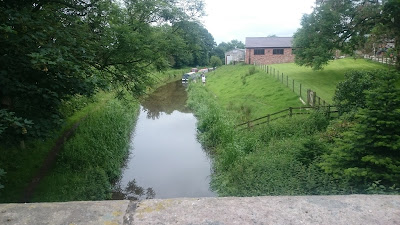 If you look closely, you can pick Wendy and her wheel-barow out ...  WHY it's HER wheel-barrow is anyone's guess!

IT was lovely to see them again but even more lovely to have a good poke around their boat.  Eddie (despite his protestations) is making good progress  - the kitchen now being completed since our last visit, radiators on the wall and piped up and a solar panel doing quite a good job.  Andy was embarrassed by me of course,... opening things and looking behind stuff.  Some people are less amenable when it comes to letting you have access to what is in effect, "their home" but it was lovely to be able to indulge my curiosity.

One thing we both were impressed with was their new cratch cover...  we're both a bit "anti" traditional covers with overly obtrusive cratch boards.  Theirs is a frame affair which makes good use of the available space without compromising the sight line from the back of the boat like so many do. 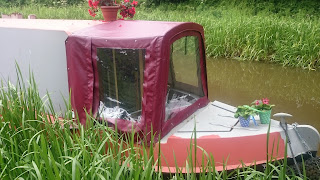 Obviously the front is a work in progress but we've agreed we'll get in touch with their chap and ask him to make a similar affair for Ellis ... although we will put our tunnel light outside ;-) (well we might if I remember)...

Mickey taking a side, they're smashing folk - typical of many boaters in that even after only spending a few hours in their company, it feels like you've known them all your lives... that feeling of "comfortable" that seems to take forever to achieve in the  'non-boating' world.

Time got the better of us but we left with a head full of things to think about from lessons learned the hard way by them.... suffice to say, my "list" is bigger now than it was - even despite all the things we're already got sorted.

IT's fun again though and we're buoyed with enthusiasm once more.

My only worry with a cratch cover like that is, that being wider than a 'normal' one, that the front edge will be quite susceptible to damage. Passing other boats in tunnels often causes the near side of your boat to come in contact with the wall (especially the kinks in Braunston tunnel!)
Kath (nb Herbie)

hmmm - that hadn't occurred to me. Perhaps I'll investigate "sloping/pointed ones" using a similar frame work. Thanks for the heads up.

Really? surely if the cover follows the shape of the cabin i.e. the tumblehome I cant see a problem if the cabin fits the cratch will fit in a tunnel. For my two pence worth!
Ade