Now it's been rumoured I have the word "mug" tattooed  on my forehead...  I am not expressing an opinion!

That would have been a first :-) 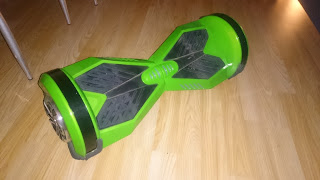 OK - I'm a 44 year old bloke but that doesn't mean I can't have fun... or get down with the kids - more to the point though, SHOULD I actually get down... getting back up again would be the problem given the state of my back and knees.

Gav at work (he's got a 13 year old daughter) brought in his /her hoverbord for me to try out.  I've been thinking about getting us a couple for use on the boat... you know, for a trip to Sainsburys along the towpath or whatever and given the opportunity to try before I buy (for once) it seemed a good idea.

I'm a natural - no really!  I have to confess  though that it's not the first time I've been on a segway ...Andy and I went on a segway tour (the big ones with handles) around Lisbon... up into the old town a couple of years ago whilst in port on a cruise we were on.   I did have a bit of a disaster, involving an old Portuguese lady who stepped out in front of me which resulted in rather spectacular falling off and rather a heated exchange of rude words - in foreign!  As I don't speak (or understand) Portuguese, I tried my best attempt at school boy French and Spanish apologies -  (Je Suis Desole and Lo Siento)... in the hope she'd get the gist...  judging from how long she screamed at me, I think it fell on deaf ears

SO - here is a quick video to show you my skill at navigating around the back of the sofa:

I think you'll agree I'm fabulous at it!

JOKING a side however, having since taken it outside, I've discovered even a hosepipe or paving slab at a different height causes at best, quite a wobble or (and more likely for a ginger person) a face plant !

SUFFICE to say, the trial has been successful and we shall NOT be getting a couple for the boat... back to plan A - the Bromptons... not so sexy or fun but a lot more practical.

Mark,
Why didn't you give us your blog name and link? NB Ellisis now on our blog list! We look forward to reading about the build.
Tom & Jan
nb Waiouru

I'm presuming you have trouble sleeping Tom - Glad to be of help ;-)