I opened it up briefly... buggered around for a few minutes and then dismissed it as rubbish.

At the weekend however, I decided it was time to note down the final positions for the wiring and plumbing to go BEHIND the lining the builder will be fitting shortly - this was prompted by our recent visit to Eddie and Wendy as they've been having frustrations trying to route their solar panel cables.

After a couple of cock ups  erroneous attempts on paper, I got fed up and decided to have a go on my laptop.

Having forced myself to embrace technology (those of you paying attention may remember that until about 18 months ago I was an IT consultant... who thoroughly hated computers) and  after a few hours use, I've finally gotten some drawings that may be useful.

I followed the layout of Chris' (the builder) original sketch so that if he passes it on to his worker-bees, it'll be something they're familiar with.

OK - I accept they might rise and eye-brow at a few bits of the plan - perhaps the symbol I installed for toilets!

NO matter...  the point is, I think it's quite clear what cables need to go where ... AND where they need to come out.

Take a look and give me your honest opinion. 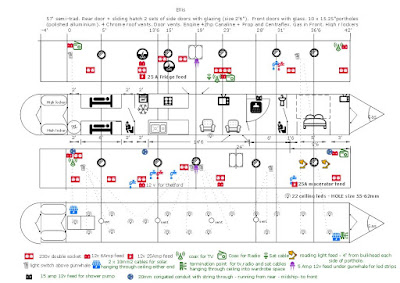 The basic "layout" application is clunky and doesn't include anywhere near enough icons /tools but by combining it with free icons available on the internet, you can make a reasonable job of it.

Our plan is still to keep the boat as simple as possible... the theory being that when things go wrong, they'll be easier to repair.

We have no intention of installing Satellite TV but we're running a cable in from the lounge to the starboard bow ... just in case.

I've also (thanks to a recommendation from a poster on http://thunderboat.boards.net) bought some of this from screwfix 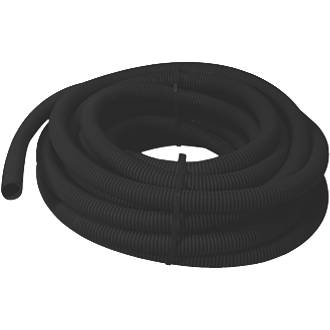 If the link disappears, basically its 20 mm corrugated tubing  that we're going to have the full length of the boat (starboard side) with a junction coming out in the larder cupboard in the kitchen... the theory being (providing I remember to feed a bit of para-cord through it first) we can use it to pull any "new cable" that might be needed in the future  through the entire length of the boat, WITHOUT having to removing any of the wall or ceiling linings...

THAT'S the theory anyway and is of course dependant on me remembering the aforementioned para-cord!

The mistake I made was having too many 240V sockets and insufficient 12V. Initially we ran most appliances on 240V through the inverter but these days almost everything runs on 12V (including the TV). BTW, where is the power supply for your TV and is it 12V or 240V?

Thanks Tom - you've triggers my memory and prompted me to add 2 12v sockets in the rear cabin (one either side next to the 230v ones)... and another in the front bedroom for phone charging. The tvs (ahem we've bought 3) are ALL 12v ones and you might not be able to see easily, but I've already put in the 12v sockets in the places they will finally end up being.

I love the person sitting on the loo!
Kath (nb Herbie)

:-) I can't deny a certain amount of "smirking" going on this end either lol...yep - we've found the level!