THAT is usually how we decide the division of labour on-board Ellis... in general, IF it's a horrible, difficult or simply tiresome task it will have been graded (by Andy ahem) as a DARK BLUE JOB... and as such is MY responsibility,

Of course, because I a good egg all round, I just get on with them...

Imagine how delighted I am to have an excuse to skive a medical exception which means for the time being I cannot DO Dark Blue jobs  - Especially one in particular.... 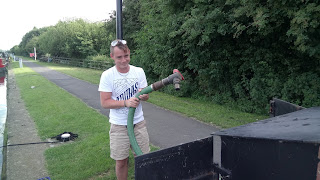 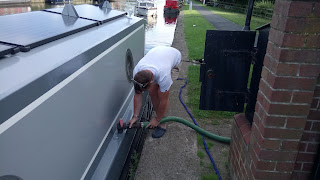 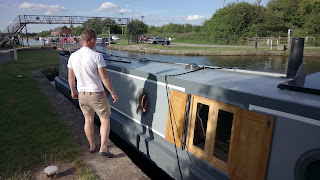 You can tell from the face being pulled for some reason, he really doesn't like this job... TOUGH I say as I've been doing it for months.

In spite of my frailty, I did  manage to walk a few miles the other night and was rewarded with a pint of Blonde by the ossett brewery company...(well they didn't do the treating - but they did brew the stuff)  but the trouble with one is that it leads to another...... and well, the rest is history.

This was us outside the Kings Arms (I think it's called that) up at Heath on the common... we don't go up there anywhere near often enough but we should as it's got a nicer atmosphere than the Stanley Ferry and more proper beers. 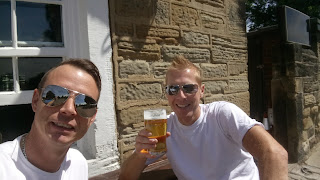 In my defence, I DID manage to get some of the none-splip tape applied to the top of the port-side gun-whale and if it's dry tomorrow, I'll try and paint over it in dark grey. 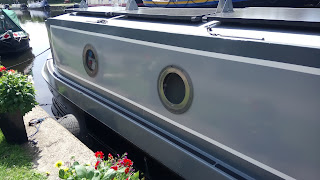 Did I mention that a while back, Old Mick had mentioned he would soon be painting out his water tank as he'd not done it for a few years?...  of course my hand being still useless did mean I couldn't help him - if I got in, I'd not be able to get out again...It did look rather cruddy down there 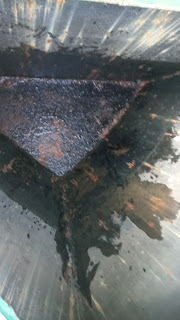 apparently, when he looked in, what with his dodgy eye-sight he thought there was only a couple of inches of water remaining... as you can see, it was closer to 18 inches and as such he now has a wet pair of wellies! 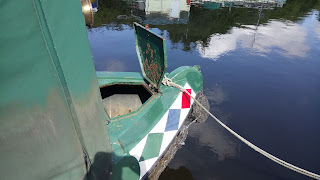 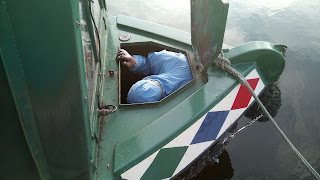 He did have a protective suit and breathing mask on but I still felt guilty not being able to help - after all, he is (depending on how old he's feeling) somewhere between 80 and 86!

Still, it's done now and he's going to fill the tank again tomorrow... it did make me rather pleased to have a stainless steel tank - which every so often I pour a bit of Milton fluid into to be on the safe side - the water filter removes any taint and to be honest, you can't really smell  it when washing either... perhaps I need to put a stronger solution in.  THAT said, most people we've talked to don't bother and as far as I can tell haven't  suffered any ill effects from drinking their tank water anyway.

oh btw - the batteries DO seem to be holding their charge better now so either the equalisation charge DID work, or we're getting better at avoiding things touching the back of the fridge!
Posted by Quaysider at 17:20

All those years of hiring narrowboats and I never once wondered about the quality or cleanliness of our water. Ignorance is bliss.