Yes that is rather a long post title - that was the shortest version I could come up with!

SO, you'll remember the other week I did an equalisation charge - in a bid to reinstate some of the batteries' original capacity?   Well, I thought things had improved.... apparently that was the quiet before the storm.

It's become a nightly ritual now to ensure nothing is pushing on the plate at the back of the fridge as we've been blaming that for the battery bank losing power overnight.  It now appears that (whilst perhaps a contributory factor) was NOT the main cause.

The main cause was that one of the 4, 135ah marine batteries had boiled dry and was dragging the others down.  HOW do we know this you ask? (I still don't know whether rhetorical questions need punctuation) well, the other night, (AFTER I'd had a good long chug up and down the river to get the batteries as full as possible before leaving the solar to finish off the charge) we noticed a rotten egg smell.  Our first thought was that it was coming from the toilet tank vent and we ignored it.

As the breeze dropped further, the smell seemed to get stronger and seemed to be stronger at the back of the boat.... STILL we ignored it, thinking it must be the boat behind...

It wasn't until 'stupid o'clock' in the middle of the night when I was awoken from my slumber by an alarm going off it became apparent what the problem was.

CO alarms will trigger when they sniff out Hydrogen Gas (which is produced by the batteries) if it gets too high.   My first panic was that we were being poisoned again by carbon monoxide so there I was flinging open portholes, side hatches and the rear doors ... WHILST Andy still slept!  On pressing the smartgauge to see how the charge was holding up, it all fell into place. 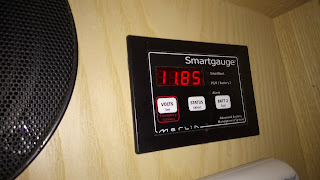 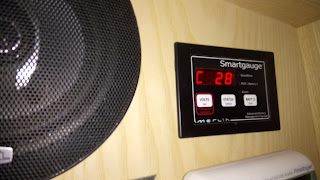 I don't know why I didn't click earlier... I mean, I already KNEW about batteries gassing and more so if they are short of electrolyte.

THING is, the paperwork that came with the boat said " 4 x `135ah SEALED leisure batteries - ergo it never occurred to me to be topping them up.

There was only one thing for it - when daylight came, into the engine hole I'd have to go and try to work out where the problem was.  AS usual, once I'd climbed into the hole with the multi-metre, I remembered it was broken! ... WHILST I was in there, I did happen to notice that they were NOT sealed and could be topped up... ergo, a trip to Halfords for some deionised water and stubby spanners followed by a detour via maplins for a new metre. 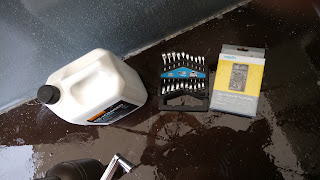 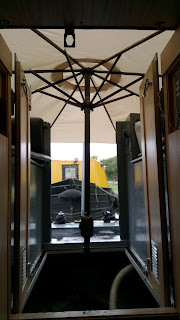 By now of course the rain was torrential so I rigged up temporary cover in the form of the parasol from the picnic bench. It DID make a major difference ...although I kept digging it in my back so now have a few bruises. 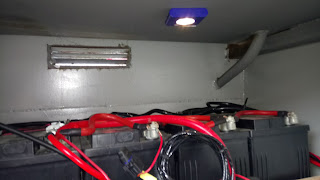 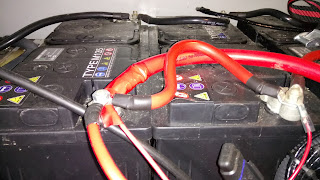 NOT a job you want to be doing with a duff hand.  Andy was at work so I struggled on as best I could one handed... believe me these are VERY heavy batteries... luckily for me, Old Mick was wandering around with Daisy in the rain so he was able to help - terrible really, asking a bloke in his 80's to help lift batteries out but as I'd started (and the freezer would be defrosting) I had to continue.

All the batteries needed a bit of topping up but number 4 was dry.  Now there is a chance it could be resurrected by topping up and charging but to be honest, given how difficult access is, I decided to leave it out and reduce the bank size to just 3.  It still gives a battery bank of 405ah - which will mean reduced charging times and thus more likely to keep them fully charged for longer if you follow.    A couple of days on, I'm' noticing the SOC (state of charge) dropping more than I'd expect over night - I know there is nothing else draining as I've used the clamp meter to check each circuit and there is only the fridge drawig power once we go to bed.

From this I've deduced the others are probably on their way out too - which is quite a pain given I thought we'd had good battery usage and charging regime.  Of course we don't know for sure whether the batteries were all good to start with...  We'll muddle on a while until pay day and then have to spend somewhere between 500-1000 quid on the replacements.  Talking to people, it appears GTP batteries may be a good option so I'll see what I can find.

THIS was the rotten egg! 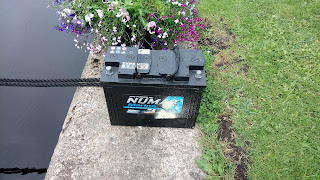 ON the plus side however, this HAS helped someone else.... a few boats down, a chap called Vince has been having problems with his CO alarms... he's on is 4th one now that keep beeping to indicate CO...  HE thought he'd bought a few duff ones and as he doesn't live on board full time has been silencing the alarms...  I suggested he might like to check his batteries weren't running low and sure enough they were - his solar array (4x 200 watt panels) has been boiling away his batteries... and whilst HE can't smell the gas, the CO alarm can.

Every cloud and all that!

As soon as I saw the "Rotten Egg" reference I knew what was going to follow! There really needs to be a better understanding about batteries wired in parallel. It doesn't matter if they are all identical (and even if they came of the production line one after the other), ONE of them will always fail first! And when it does, in most cases, it will drag the others down with it. If you are lucky and the faulty one goes open circuit you'll just lose part of the overall capacity, but with lead-acid batteries it's usually one cell going short circuit due to debris across the plates. Then your 12 volt battery becomes a 10 volt one, and the remaining healthy cells are forced to operate at a higher voltage than they were designed for, hence the bad eggs smell.

Any boater using multiple batteries really needs to carry out a simple test at least once a year (but preferably more often). Turn off the master switch, and any charger or inverter, then carefully disconnect the negative cable or clamps from all the batteries and measure the voltage across them, one by one. Ideally the readings should all be the same or very close - within 0.1 - 0.2 of a volt (100-200mV). Any which are appreciably lower than the rest must be regarded as suspect, and one showing more than 1 volt variation is a definite no-no. This would be a good time to check the electrolyte levels in non-sealed units. If much water was needed repeat the test after a few hours - you may be lucky. If not, leave the suspect battery disconnected (carefully insulating the cable/clamp). Depending on the age of the battery bank it may be better to continue with less capacity until another fails. You should NEVER replace just one battery - unless you're prepared to do this test on a regular basis.

A basic digital multi-meter shouldn't cost more than £5-10 from car parts stores or the likes of Maplin, but if you have an onboard charge monitor you should be able to use that instead. Just make sure that no loads or chargers are running, and re-connect your batteries one at a time.

I have two of these sealed leisure batteries in my camper https://www.tayna.co.uk/LFD230-Varta-Professional-DC-Leisure-Battery-930230115-P3650.html good value and bombproof in 2 years only charged by solar so far.