I can't believe it's already been a week since my first operation...  the hand is coming along nicely and although I DO have full movement in all my fingers, I can't do anything with them... signing my name was an interesting experience the other day as I couldn't hold a pen!

Luckily, I can pick up a glass with my "wrong" hand so at least I'm not de-hydrating (ahem).

To all those people who think not going to work is boring ...  you are wrong.  Maybe it would be boring in a house but being on or around a boat, there is always something going on to watch or someone wandering past to have a natter with... apparently it's my Granddads fault on my mothers side and a trait I inherited - although I never met the bloke, I'm reliably told he had the gift of the gab and could talk the hind leg off a donkey...

MOST of the time it's quite pleasant and friendly and I respond accordingly - on Tuesday however, AFTER I got back from the nurse for a wound check (yes it WAS still there) I went over to the water point to fill up again...  (we do seem to get through a lot of water - even with submarine showering)  I've come to the conclusion it's the amount wasted to run the hot through from the calorifier that causes it.... anyway, so Tuesday afternoon... there I was, filling up the tank, sat reading and having a cuppa when a couple of drunken raggers   chatty scallywags appeared and began the whole "you must be loaded mister. I've heard them boats are expensive...where'd you get the money from to buy it?" kind of conversation.  I'm paraphrasing a bit here but it continued along the lines of "how did you get the money together? - I can't even afford to rent a flat and get out of my bedsit"...  THIS whilst they both enjoyed their cans of Tenants super strength... at 1.30 in the afternoon.  Realising they were not the most rational types, rather than say to them "well for a start I've worked 65hour+ weeks for the last 28 years, often had 2 jobs and got up at 4.30am 2 Sundays a month for the last 7 years to do car boot sales to save up the money WHILST paying circa 800 quid a month in taxes so the likes of you can draw benefits and do nothing to contribute to society"  INSTEAD, I  lied and said it's my parents boat and they just let me use it  when they're away !

SOMETIMES there is no point in saying what you think as it will only cause offence - EVEN though I have to admit to being rather p'd off with them.

Where was I? - Single handing, single handed...  Once the tank was full (and the cretins my new friends had moved on) I decided as it was a nice afternoon to have a chug up and down the river to get the batteries as high as I could on the engine and then do an equalisation charge on the new Generator we bought from screwfix the other week.http://www.screwfix.com/p/impax-imdy2500lbi-2200w-inverter-generator-230v/16100#product_additional_details_container 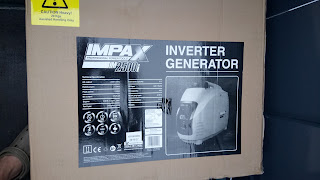 Well, technically it's the 2nd one as the first one we tried wouldn't run so AFTER filling it with 5.7 litres of petrol and .9litres of oil, we (well Andy cause I couldn't lift it one handed) had to drain theaforementioned out and return it for a replacement - which incidentally only took them 24 hours to get AND without any fuss or hassle ... well done screwfix.

Up until now, we've been managing to top up the batteries with a little 1kva Honda I'd borrowed from Roger at work... given I will not be working there any more, it only seemed fair to return it to him ... besides, it couldn't really run the  combi charger at anything over 35amps anyway.... this new one can make the most of the charger which goes up to 90amp I think...  NOT that it'll ever output that for long as it's more sensible to use the 175amp alternator for the bulk phase.  It DOES mean however that the last 20% of charge when the current tails off can be done on the generator - meaning less engine hours/diesel/filters and oil changes etc..

I COULD have done the charge on our home mooring but listening to a generator going for 4 hours would feck me off  irritate me so I planned to moor on the cut just after the flood lock - a good half mile away from anyone else (ever the considerate boater - that's me).

The reason I went on to the river was to avoid having to do any lock work with only 1 hand.... That was FINE on the way out as the flood gates were open so I just sailed through.  ON the return journey however, for some reason (as yet unknown) the gates had closed - meaning there I was, going downstream on the river with only 1 good hand, a ladder to climb and boat to moor up to be able to open them .  LET'S just say it's not something I want to repeat - especially the climbing a ladder with only 1 hand.

I have never been so relieved to get tied up the other side of a lock and begin the charging task. 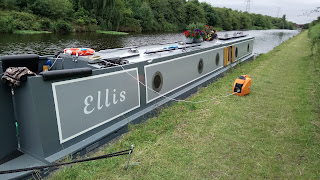 Even bashing in a couple of mooring pins is hard work when your usual hammer hand can't hold a hammer... or stabilise a pin whilst the other one has a go at  the job.

It can get a bit more technical in that measures of specific gravity of each  flooded cell should be undertake to determine whether further charging is beneficial or have a negative effect...  IN MY case, given I've no way to measure it, I set the combi charger to automatic and left it to it!

I disconnected the solar panels so as not to confuse it and sat in the sun, reading for the 4 hours it took.

Whilst there btw, Daisy randomly appeared all 'waggy tailed' and happy to see me... and then wandered off  - presumably back to Mick who must have been 'somewhere' out walking her... she's quite a character.

The result of this battery maintenance should be an increased capacity  ... hopefully back to the batteries original capacity.  I'm not convinced as yet  but after a couple of days of normal use I suppose we'll find out.  The thing is, given the builder was working on the boat on dark early mornings and dark evenings using the lights, it might be the batteries were NEVER in a good state to begin with.  I'm loathed to give in on them after just 7 months though so thought this was worth a go first.

I also read something the other day about a whole load of SMARTGAUGES being incorrectly calibrated at the factory so given THAT'S the device we've been relying on for the State of Charge,  we could have been undercharging since it's inception.

Thinking logically about it though, the key to good battery management is LOWER use...  I can't imagine how difficult it might be for folk who have a 230v fridge/freezer and have to keep their inverter on all the time - we only turn ours on when we need mains power for something specific - certainly not over night ... during the day (in summer anyway) the solar panels can usually keep up with the 5/6amps it consumes just being "on".

IN other news, the cats are settling a little bit now... George is still very jumpy most of the time but at least he's come out from under the duvet and stopped hiding under the chairs when not under covers. 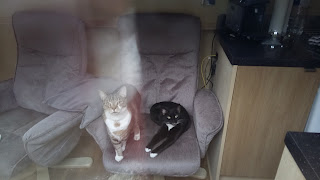 They've even started a bit of mutual grooming ....  this usually turns into a fight but thus far, it's all been quite harmonious.

do you ever talk to yourself out loud? This bit of your blog made me do so: "INSTEAD, I lied and said i.." "oh, brilliant" is what I actually said, out loud to no one in particular (Husband is used to ignoring random outbursts) Yes, what an EXCELLENT way to get out of that stupid conversation with your 'new friends'. Well done you. World peace might actually break out somewhere near Stanley Ferry!

Apparently I talk away in my sleep and I'm told it's NOT too dissimilar to the rubbish I come out with when I'm awake... NOT sure how to take that one so I won't dwell on it! ... This NOT saying what I think is a relatively new thing for me... for years, my mouth has said what I was thinking long before my brain had a chance to apply a filter!

Have you considered fitting a Sterling PDAR to the domestic alternator? It will do the 4 stage charging automatically.

Thanks for that Tom - I'll do a bit of research on that one.

I hope you're managing to keep Jan from buying TOO many new tools for her arsenal!