USB socket in the bedroom... a 'shrewd idea'

Yesterday morning when I opened the side hatch I saw this little fellow floating by: 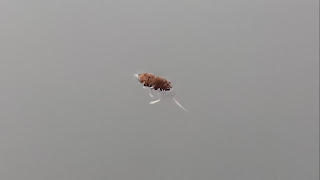 I'm not sure if it's  Shrew, a vole or a common old mouse...  either way, the little chap/chappess wasn't moving.

Given the size of the pike in the canal and river here, I've no doubt before long he'll/she'll be eaten as a mid morning snack.

SO - the emptying of the house continues... SLOWLY as folk who agree to buy things on Shpock don't turn up 80% of the time... RUDE!  We're both getting  bit sick of  people haggling to get things for less but Andy keeps telling me "anything is better than nothing" - which was my default position originally of chucking the whole lot in a skip.

Practically everything in the house (well Bungalow) is of little or no value... cash wise OR sentimental... well expect for my piano.  That was my Nan's and whilst I'm not a particularly sentimental soul, it pains me not to be able to keep it... I've tried to persuade the tenant to keep it be she doesn't want it... I've tried asking my brother to take it (he's got a big enough lounge for it to sit 'un-noticed') but he doesn't want it either... even my mother (who was custodian before me) doesn't want it back again ...SO it looks like it's destined for either a school or old folks home.    It was suggested I chop it up and make a seat from the wood and take the metal to a scrap yard but that would be sacrilege... it's still nice to play and has many years of musical life left in it yet.... alas just not from our family. 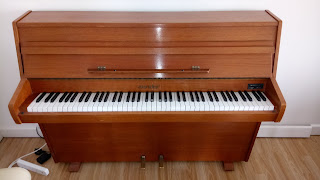 As a distraction from packing up the house, I decided it was time to make a simple folding table to put a phone/glass of water/clock on in the main bedroom on the boat.  RATHER than re-inventing the wheel, I called in to Homebase and bought a corner shelf - of the shelf so to speak.  It also seemed a good idea to fit another USB charging pouint under it so phones can charged and also to enable one of the little USB powered fans for the hottest summer evenings. 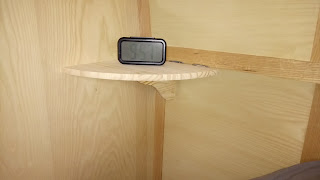 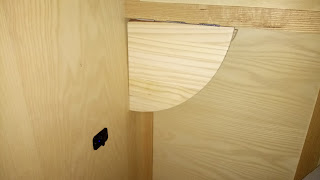 AS usual  sometimes is the case, my enthusiasm to get the job done overtook my thinking process and I happily fed a cable through the bulkhead, under the bathroom sink and down to the shower-pump supply... 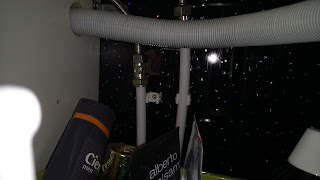 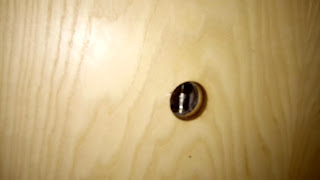 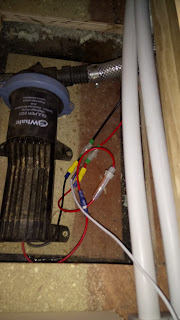 I was quite pleased at how easy it was until I tried switching the fan on to test and ... NOTHING.... 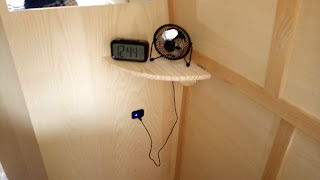 It was only when I turned the shower pump on to see if I'd tripped the breaker that I realised what I'd done... doh!  The pump is SWITCHED of course and that would mean the usb point would only be live whilst the shower was pumping out....

SO I needed to get to the live wire in the switch... which was a pain in the arse more difficult. 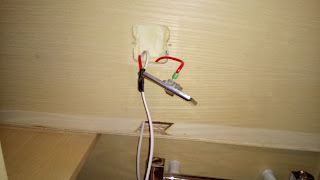 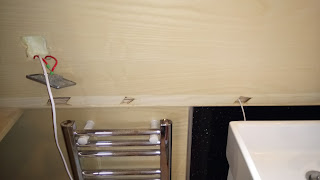 As you can see, I had to remove the trim and then cut holes every few inches to allow me to feed the cable through (with the help of a tent peg).

In the end though it all worked out for the best as I then LEFT the original cable at the pump connected to the negative cable (doubling it up) which will mean if we decide to remove the USB point and replace with a standard car 10amp cigarette lighter socket, the cable will already be up to the job.

I'll leave you with a photo I took the other day when we went to the pub for lunch and moored just off the flood-lock in Wakefield...  the flowers Andy's planted look nice - although they DO make for interesting corners sometimes as they obstruct the steerers view quite a bit! 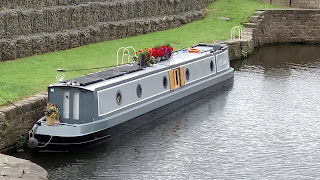 Ha! I found the comment box. Of course!!! *touching my forehead* - the comments can only be posted underneath each individual post. Anyway - thank you for yours today and looking forward to reading more about your adventures.
All the very best,
Silvia