Can you believe it's now 4 weeks since my first hand was done? - no, neither can I.

Its actually healed much better than I expected it to... ok so there is a really tender bit at the start of the wound and I can't exert much force/lean on it, but other than that, it's quite usable now.  I'm sure I'm still exempt from a few "dark blue" jobs a while longer though.

Anyway,  you'll remember a long time ago (before we got the boat I think)   Andy's dad had given us a whole load of canal books for us to  work our way through... or course, we've not had the time to do it yet, but now the house is rented out, they had to come out of the attic and on to the boat.  TROUBLE is of course, WHERE to put them?  None of them would really fit in the tv cabinet so having discussed it, we decided to put up a shelf for a 'mini library'... the best place to do this turned out to be above the "spare" (crew) toilet in the cupboard between the kitchen and dinette... 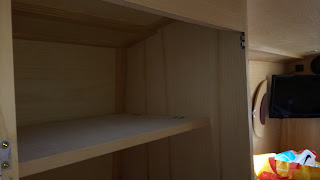 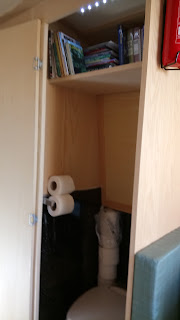 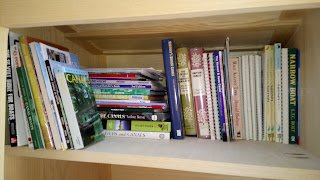 It's good to have them on-board... now at least we might look through them and learn something... If nothing else, they'll be interesting to visitors.

Since fitting the shelf and putting the books on it, we began to lean a bit to starboard...  it appeared that we''d altered the balance  of the boat by putting them up high.  SO we set to and began trying to level the boat out a bit by moving things around.

Pretty much to no avail I'm afraid and we were getting rather exasperated - moving tthe (now defunct) battery around on the port side to try and balance things out better. just didn't seem to work.  We decided it was a combination of the books, and the battery which had been taken out that was upsetting the boat's kilter.  SO we took a few books out and moved cans around the kitchen cupboards before standing on the bank and "looking;" ...  STILL the boat listed a bit to starboard so i put the old battery back in the engine hole - taping up the connectors first in case something got dropped on to it.

It wasn't until the weekend when I was putting the bed away that it dawned on me - the toilet tank isn't central and had been  about a month since it was emptied...  taking a look under the bed at the 'slurry level' all became clear the tank was indeed more than half full and must have reached tipping point - it not being on the centreline...  a quick visit to another boater to buy a pump out card (we still have 2 full ones on the boat somewhere but can we hell as like find them) and before long the 'dark blue' job had been done and all was well with the trim again.... I say well, it was now listing to port a bit but that was easily remedied.

In other news, it appears the digital diesel tank gauge has gone on the blink.  I'd not put any diesel in since we got back from Skipton in Early June  and  it was still showing full so I thought I'd top it up anyway - knowing we'd had a couple of trips out and done a fair bit of  battery charging.  It took 100 litres to get it back to the usual "full".  It occurred to me, that since I had all the batteries disconnected the other week, it might need recalibrating again... so with Andy's help, climbed back into the hole with my little screwdriver whilst he stared at the calibration dot on the gauge... IT wouldn't disappear ergo, it's fooked.  Technically it's still less than a year old but given we don't know how long it sat on the shelf at the boat yard, I can't face the hassle of trying to get them to replace it... SO at some point, we'll suck it up (a Canadian phrase I believe) and buy a replacement ourselves... no rush though, it's easy enough to open the tank and take a look - easier still, to keep an eye on engine hours and work it out that way.

Writing of engine hours, we're just over 400 hundred now ... since the battery trouble, I'm following old Mick's daily regime of running the engine for an hour each morning (8am) to get hot water and do the bulk charge using the alternator and then leaving the solar to finish the job.  It seems to be working well and the batteries are full by lunchtime even in this sunshine/showery weather.  After lunch, I'm turning the fridge right up to high to use the "waste" power and then before the sun goes down, turning it back down low - the theory being that it's being uber cold all day so doesn't use as much to 'tick over' through the night... I don't know if it's making a real difference or not but it's nice to be making an effort.  I've got the replacement batteries lined up from a place in Glasgow - 4 x 135ah (1000cca) ones branded as Superbatt.  A boater told me they are made by the same manufacturer as "Exide" ... but are 30 quid each cheaper.

I did look at gtp, Trojans and even lithium - however, we just don't have the money free at the moment so will have to cut our coat according to our cloth once more.

The NEXT job on my list it to get around to making some wooded (boat coloured) seats in the bow... having tried a couple of folding chairs out the the other day when we took the neighbours to the pub, it was decided that a bench each side might be better... AND if I box it in with a removable panel, it will give a bit of hidden/tidy storage space - which will mean we can move some coal and wood forward from the rear lockers to make space for some sun loungers we got the other day. 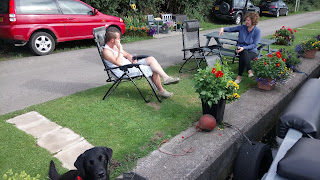 For 25 quid each though, they're actually very comfortable and VERY easy to fall asleep in - I know this!!!

Until next time.
Posted by Quaysider at 13:57