Moving the cats on to the boat...and a change of bandage

WE decided a short while ago that given you're supposed to keep cats INSIDE a new home for a couple of weeks that we'd wait until I'd had my first hand op so as I'd be around to keep them company... well that and the fact that on a sunny day, without portholes/side hatches open, the boat is like a sauna.

So on Saturday afternoon, we picked them up from the house (where they've had free-reign for quite a while now, and shoe-horned them into the pet carriers...  they don't like them at all - probably because whenever they go into them, they're either on route to the vets or the cattery.

The cats ( we've 2 of them) were soon let out of their cages and allowed to explore their new home.  Sox (the black one with white feet) has no fear of anything... she happily came out to explore but George... well lets just say he's frightened of his own shadow.

I lost them after a few mins and found them both hiding under the sink... ie the only bit I've not yet boxed off properly. 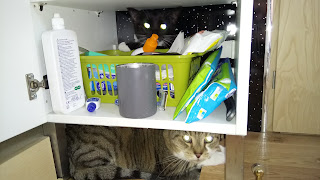 Now I'm not a cat psychologist but I figured it best to leave them there until they settled down a bit - poor old George was panting a bit and I could tell he was distressed.... SO I put food, water and a litter tray down in the bathroom for them and settled down to watch TV.

In a few hours they came out and things seemed more normal. 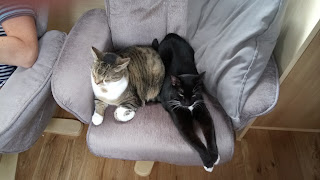 Unfortunately, since then George has had a bit of a relapse and spent most of the last couple of days hiding under the duvet... which I don't approve of at all but given he obviously feels safe there, have given in for now...

I suppose they could be feeling the movement and not liking it... or just all the different creaks and groans as the steel expands/shrinks etc ... so hopefully once they get used to it things will improve - if not, we'll have to consider finding them new homes :-(

HAND wise - well, it's good and bad in about equal measure thus far...  MOST of the time I've no pain at all - well up until I do something stupid instinctively like clapping my hands together to catch a fly...  it happened so fast and with no conscious thought but I won't be doing it again that's for sure...  for hours afterwards it throbbed and my fingers tingled like mad.

I'm quite surprised that all of a sudden I don't have any strength in my fingers at all - not even to hold a bottle whilst opening it... or to turn the gas on whilst I use the other hand on the clicker.   I'm going to drive for the first time today as I have a wound check at the docs booked this afternoon...  it'll be ok as my old banger is an automatic so a side from having to use my right hand to depress the button (to change between forward and reverse) I'll be able to use light pressure on the steering wheel with my finger tips and besides... there aren't many corners between here and the surgery😀

I DID take off the bandaging  to have a proper look myself (actually it was mainly because having tried showering with a bag on my arm I decided a rubber glove taped on would be more useful when doing my up and unders...) and it doesn't look bad a all - nowhere near large enough for the discomfort it causes lol...  oddly, there is bruising from the base of my fingers down into my wrist. 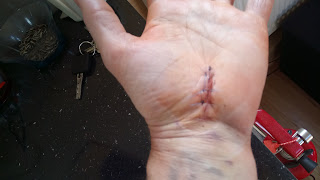 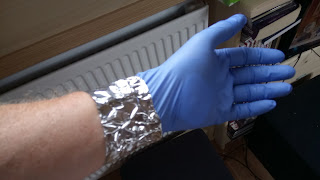 Shortly after taking these snaps, I knocked my hand on the side of the chair and it hurt so much that I've had Andy bandage it back up again with padding over the wound like before... it's a pain not being able to get it through a sleeve but probably for the best.

I'm not taking any painkillers for it at all now though  - sorry I should rephrase that... I'm not taking anything in addition to the stuff I take for my back... I'm luckier than most folk as I have some decent stuff in my arsenal, compared to the cocodamol type of thing you can buy over the counter ...

WHAT has happened to summer though? - I've been lighting the fire every day thus far - rather pleased I'd built up a store of kindling before the op 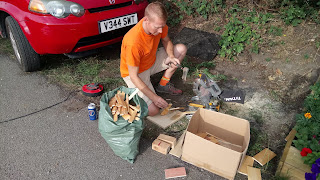 - we've now got 2 plastic garden storage things... one full of kindling/wood and the other loose ovoids  - initially I'd left the coal in bags but the other day someone walked off with one... if it were the middle of winter I'd understand it ... in fact, if they were so poor and cold I'd gladly GIVE them a bag.  It'll NOT be so easy now ...although I suppose they could shove a couple of lumps in their pockets each time they pass... ruddy scrotes! 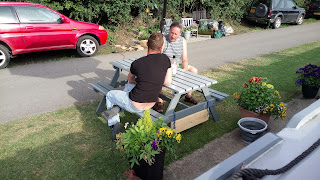 Then again, I'm sure the surgeon said  I wasn't to get my hand wet for 2 years so no more washing up for a while for me ;-0 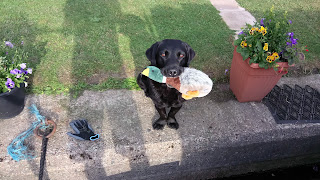 BRYNN on the other hand has now decided that if he brings his favourite toy to me, I can hold it whilst he eats his doggy chews...  I feel honoured.  The peace will be broken soon as apparently neither he OR Daisy get along with cats!!!

Glad to hear you are mending. Regarding hands not getting wet after surgery, I'm almost at the two years mark after my self inflicted incident and I'm sure the consultant said five years no washing up!
I found a plastic bag with an elastic band around my arm worked for me in the shower.
Houdini our original second mate was at first not impressed with boat life and behind the sofa was her preferred place, but she soon got used to it. When we stopped for the day she'd check on the amount of green outside before getting excited. Tilly however just gets excited about anything and everything! There is nowhere, other than the engine bay, that she hasn't claimed as hers!
It'll take your two time to settle, I'm sure they will and once they get to see all the potential new friends outside, well!

good luck with settling the cats in