(well it is when I begin this one handed)...

I don't know what all the fuss was about - this Carpal Tunnel release surgery is a piece of cake.... NOT.

You decide from this snap on the way home... not the most flattering of photos I'll grant you but the anaesthetic was wearing off and I'd yet to take any pain-killers. 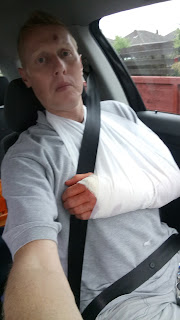 ignore the gash on my head... that happened on my last day at work when a wooden beam that HAD been keeping 2 vertical bits of steel apart came lose and knocked me to the ground...HSE eat your heart out lol.

It looks more sore than it is (the head I mean)

If you like this sort of thing, here is someone else's surgery...

I was only in Theatre for around 20 mins in all... 6 hours hanging around in a shared room with  a bloke called Steve - he was having trigger finger release surgery and we both ended up in our chairs asleep most of the afternoon watching day time TV - well that and sorting out our funeral plans. 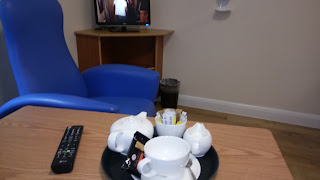 and the reclining chairs WERE very comfortable.

Our respective drivers/partners had to kill time in/around the hospital as they were not allowed up due to the "shared" nature of the room - ridiculous..Mine ended up in MacDonald's charging his phone and using their wifi, whilst Steve's sat in the carpark... giving him agro by text message every time he/we dosed off.

After what had been a long wait, once on route back to the room, (complete with un-necessary gown) one of the nurses coming towards the nurse pushing my wheel chair, mouthed to her colleague "his testicle is hanging out" - on closer inspection, it turned out to be my 'cork float' key ring which was clipped to a belt loop on my shorts - oh how they laughed...  I on the other hand, now feel rather inadequate if 'cork float' sized testicles are the norm!

They made us have another drink/eat some toast back in our room before forgetting about us...  it wasn't until Steve's driver/wife decided enough was enough and rand him, we summoned up the courage to wander out to see if we could go home - the looks on the faces at the nurses station confirmed, they thought we'd already gone.  Oh well - we had our dressings packs and letters to our gps etc. and were out of there a little before 6.pm

On return to the boat, Andy took over role of captain and we chugged up to the water point.... it taking so long to fill that we abandoned it about half full  and went to the pub for tea.

On return, I took a few "good" pain killers (I'm lucky compared to most as I have a good selection from the doc for when my back is at it's worst... which along with a beer, agave me a reasonable nights sleep.

It's rather sore this morning so I'm not moving from my chair in front of the TV/Fire...

Wuss ! I had both of mine done the same time, no pain & only "local" bandaging, went on a steam train trip next day to Scarborough, well worth the inconvenience of a few days awkwardness been good ever since (5 years & counting)

That's a very brave face.
Must be your Celtic Warrior ancestry coming out.
Get fit soon.
Rog
nb Paneke

If that's how you look whilst Andy is doing the driving I'll walk thanks ;) LOL (sorry Andy)

Hope you dont take too long to recover mate, glad all went well, obviously pays to advertise with your cork float. Maybe a good tip for the future! LOL

well done for blogging with only one hand