Wakefield to Skipton.... Day 2 in the town centre and 'T boned' by a hire boat.

Another truly awful day (weather wise)..  The fire was still in from the day before, so I riddled the clinkers, chucked a few bits of kindling on and made it up for the day ... a good decision as the rain and wind got considerably worse as the day went on.

There's still no sign of our oldies... they may have given up on the trip all together and turned around.  I wouldn't have blamed them.  They'd already intimated the double locks were a lot harder work than they'd expected and add gale force winds to that... well, you've a recipe for a really miserable time.

Having put our waterproofs back on and braved a walk into town, we bought more dvds and cds from charity shops and I opened the Champagne my friend had given me the day before as a birthday present...  AS Andy still isn't drink since doing 'dry January' - I was FORCED to drink the bottle myself...  it was lovely.  AS such, at some point in the afternoon, I nodded off in my chair.... to be awakened by a crunching noise as a hire boat crashed into the back of the boat.

HAVING been in their position many times, there was no point in being cross with them and they did apologize profusely... well as much as I could hear through the howling gale and frantic reversing engine noises lol

It seems they had been trying to moor in a space a couple of boats behind (which was far too small) and on aborting the mission, the wind took a hold of them and slammed them into us.

They managed to reverse their way back to the water-point and moored for the night... which as a bit of a pain for us as this morning it meant we hard to reverse around them to use the tap further back... ALSO in the wind. 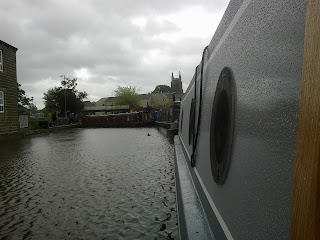 Here they are post crash, trying to moor up.

Modesty prevents me from telling you how well i did the manoeuvre this morning though...😀
(at about 6.30 am to reduce the likely witnesses if it all went belly up in the wind)

To give the fellas in the bire boat fair credit, one of them was up and about and came out with every intention of grabbing a line if I'd needed it doing.  They'd had an awful day having picked up the boat from Silsden a few hours earlier and struggled their way through the swing bridges we'd done the day before. 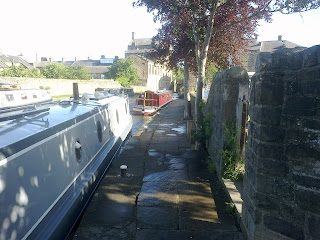 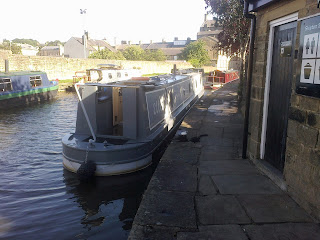 Whilst on the water-point, I ran a load of washing through the machine (on the batteries as they were still at 80%) and by the time the tank was filled it had finished and was ready to go into the drier.

We had to move today anyway so as not to overstay on the visitor moorings so have now gone around the corner passed the main basin and will spend the next couple of days here if the ledge doesn't drive us TOO mad... it's a handy place to be as the Skipton Gala is this weekend.  All being well, We'll turn before Gargrave and begin the return journey on Sunday.

Today however, my parents are on route to visit the boat for the first time and the plan is to have fish and chips at Bizzie Lizzie's.

If you are partial to a warm pork pie you need to visit Stanforths Butchers which is by the second bridge on the Springs Branch. If you do indulge, beware the jelly is still very very liquid inside. Enjoy Bizzie Lizzies.
Pip NB Oleanna

Cheers Pip - we'll do that tomorrow as we're running out of charity shops now ...

so glad you haven't forgotten what it's like in a hire boat. I remember only too well those crashing feelings.

IT's not that long ago really... tbh, I don't FEEL like a boat owner yet... you can tell other owners DO treat you (as in us) with more parity/respect now but every hirer has also been marvelous too to it's a 'win-win'.