Apperley Bridge to Leeds and on to Wakefield...

After a very windy night again, we set off about 7.30am on the route back to Leeds.  The weather kept threatening rain but only in short bursts.

By around 9.30 we were being penned down through the first couple of locks in the rough areas and had a pleasant enough journey on into Leeds.  We over took (whilst it was moored) the Lady Teal posh hotel boat near Kirkstall Brewery and before long we were entering Granary Wharf.  There WAS a bit of a panic in lock 7 it might have been, where we met a couple coming up so whilst waiting for the lock to fill we were all chatting as you do when I noticed their boat was listing... quite badly.  It turned out the chap had wrapped his rope around the bollard twice to keep it steady as the lock filled (using the centre line) and it got jammed.  Luckily, Andy and I both had our walkie talkies in our ears so I Was able to call him and got him to shut down the top paddles,  and then run back to the bottom ones with his windlass to let some water out...  it was a very close call.   I DO have it on video "somewhere) so I'll have a look and see if I can edit the (10 minute) clip, it will be in.

We noticed a swan planter on the roof of a boat, which on closer inspection turned out to be made from an old tyre. 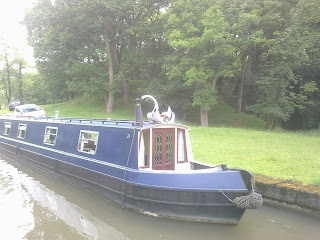 By the time we got into Leeds, quite a bit of water had come our way and it took a bit of faffing around to equalise the levels enough to open the gates as you can see, the water was pouring over the top . 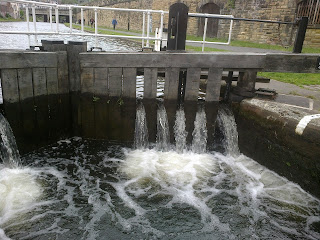 We moored up easily enough although the wind DID get up quite strong.  It's a funny place in the wind - it never occurred to me NOT to light the fire (it dropped quite cold in the afternoon)  but no sooner than I had, did we have a boat full of smoke due to the strange air currents caused by the high-rises around.

At least we know all our smoke alarms work ok now!

Later in the day, we called to visit a friend and I shared a bottle of wine with him whilst we looked over his plans to convert 2 apartments in to one large one... very exciting stuff.  Can't wait to see work get under way.

Our plan HAD been to spend a couple of days in town but as the weather wasn't looking much like improving, we decided to head home on Tuesday...  Partly down to poor weather but also as there were a number of jobs I'd like to get done before my operation. 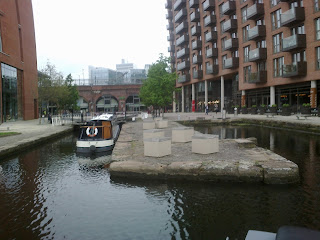 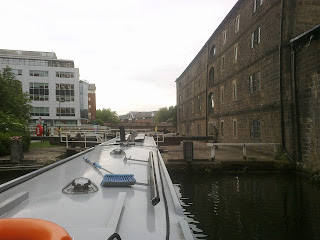 I sent my friend a message suggesting he looks out for us as we headed down the river.  WE could see him on the balcony and he took a couple of long-distance photos of us ... 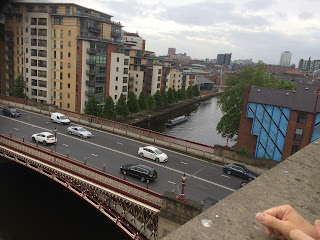 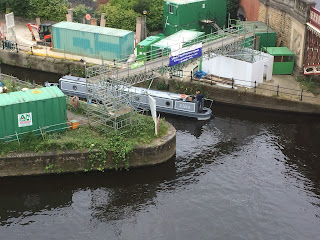 As it had been quite early in the day when we left Leeds, rather than overnighting on route, we decided to make the journey in one.  In all, it took a little over 7 hours which wasn't bad.

It was nice, when coming home from holiday, NOT to have a load of washing and un packing to do... I could get used to this.

Calling home to collect post, we had a quick catch up with neighbours and you'll be pleased to note, the vent pipe has arrived so I 'll be able to get rid of the smell emanating from under the bed - a job I intend to get on with ASAP....  also to be done, is a bit of adjustment to my wardrobe door  - it seemed to twist the hinges when we got stuck on the ledge a couple of months back and as such hasn't closed properly since.

ALSO on my jobs list is finishing off the TV cabinet in the lounge - I need a few bits of wood so will have a look in the garage to see if I can find any, without going into work/spending any money.

BEFORE then however,  AS we are still on holiday, we're going to the pub for lunch now.

Hope you enjoyed the trip even though the weather hasen,t been it,s best for you.

What a great trip. thanks for taking us with you.

IT was smashing... took an awful lot of paint off but I've got a brush and plenty left so when I can be bothered, I'll get touching up. AS for the weather, I'll admit there were a couple of days when we moped around fed up - more to do with the timing than the actual rain.

Cheers Heather - I need to get a better phone or camera as my faithful old fisher-price plays up an awful lot now. The trip has however made us both want to set off on our year off way sooner than is sensible... we're still planning to save 2 years mortgage payments BEFORE we head off but now the tenant is lined up to move in, temptation is greater than ever...