Venting the toilet tank and seeing the best in people...

It's funny how a sunny day makes everyone seem nicer.  Take Saturday for example - from dawn to dusk the sun was out and along with it, all manner of different kinds of people.

What I'm referring to in the main are the 'odd looking' types that most people try and avoid eye contact with.  I, on the other hand have a habit of saying hello to everyone and quite often a conversation will spark up with the most unlikely philosophers you're likely to come across...I didn't get his name, but a beardy old aromatic bloke appeared on our bit of the cut and came walking down with his dogs - to put it bluntrly, he looked like an old tramp but he was eloquent, articulated and very philosophical about life and the world.   Andy despairs sometimes but at least I've STOPPED offering people a drink.

The DOWN side to nice weather however is that taking a bag of rubbish 300 yards down to the bin store can take over an hour... mainly because I end up chatting with other boaters... ON Saturday however,   the nice weather even led me to offer to take someone else's rubbish with me to save the old guy tying his bike to the bridge.

Right then - SINCE we got back from Skipton, I've been working my way down a list of jobs I won't be able to do once I've had my left hand operated on (I'm a leftie btw) - TOP of the list was to connect up an external vent pipe to the charcoal filter under the bed that I'd stupidly  rather optimistically thought I'd get away without doing...  Whilst on holiday, the smell got too much for us and in the end, I resigned myself to making another hole through the hull - this was AFTER I'd poured a gallon of "GREEN" into the tank to take the edge off it a bit.

TROUBLE was, the place I wanted to drill through had a bracing bar through it - chopping through 6mm of steel is one thing but add to that a 30mm box section and you're talking a lot harder job. even my second choice was scuppered due to bracing across the front bulkhead.

In desperation, the only easy place was above the gun-whale almost at the same level as the bottom of the bedroom porthole. 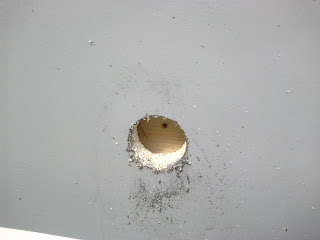 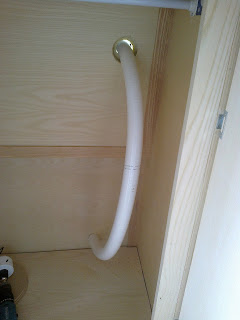 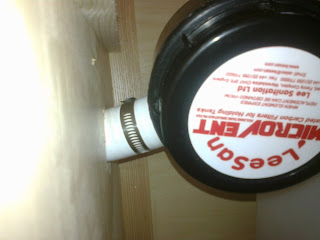 It's all connected up now and the smell has gone - well nearly but "febreeze" will finish the job I hope!

Next on my list was to adjust my wardrobe by inserting  a 4cm wide spacer between the bed side and aperture - the interior space remains unchanged but it both closes properly again now AND you can get away with having a bottle of water on the floor by the bedside more easily.

AS it was so hot and sunny, I though it might a good idea to get around to touching up the blacking between the rubbing strake and water line... whilst it would be nice and easy to apply.  With that in mind, I inflated the rubber dingy (bought just for this purpose) and began the job. 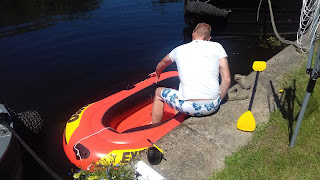 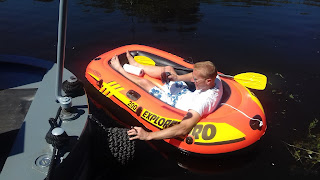 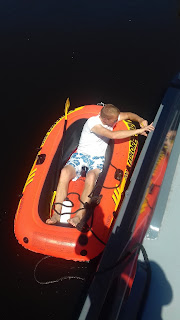 IT HAD seemed a good idea - on reflection and having struggled to keep held on every time a boat passed by (it being a lovely day lots of people we boating) it might have been easier to lay on my belly on the bank to do it.

Anyway - it's done now and although purely cosmetic  (and it stops about half an inch short of the waterline)  it has improved the appearance considerably.  The PROPER blacking (as in out of the water, jet wash etc.) will not take place until April next year.

Today (it's now Monday) was my last day off work and tomorrow I'll head back in to the unknown.  I've had no contact with either my boss or my colleagues since the start of our trip and the subtext of the silence is that they're annoyed I stuck to my guns and took a holiday.

Given I missed out on 8 days of last years holiday entitlement, worked most of the bank holidays (unpaid) quite frankly I don't feel at all guilty.

THIS morning, I had to head into Sheffield to the private hospital where I'm having my hand operated on next week for the "pre-assessment" and "Mrsi swabbing" - well that's what the letter said.... that and a questionnaire.  It was a bit of a waste of the morning to be honest as when I got there, a 13 year old nurse took me into a room, asked me some more questions (that COULD have been on the form anyway - a couple of examples here being what is your usual blood pressure, and how tall/heavy are you?....  I could have emailed them in and spent the morning doing something useful.

HEY ho.  At least I already know the surgeon doing the op and have faith he knows what HE'S doing... and as it's private, Andy can wait in my room whilst I'm in theatre and chill  rather than fighting his way in and out of Sheffield twice.

Before then however, I still need to get the TV cabinet finished... I'll be candid here and admit neither of us like what I've done.... like I've said before, it's usually my 3rd attempt at something that ends up being ok...  there just isn't time to have another go at this for the next few months so we'll have to live with it... however it turns out.

We have found that not adding any chemicals to the holding tank works best for our tank. It might take a while for the tank to settle down but in the end you lose all of the smell from it completely.

we did start off with Brewers yeast which seemed to be working fine... until it got to tipping point and the smell was like a beer and poo mix :-(

Since I emptied it, I filled it up and rinsed it out twice so for now, it's natural - we'll see how it fairs... SO far so Good!