A Spot of Varnishing and good neighbours...

It's been a funny old week - after years of stressing about potential unemployment, NOW that' it's happening (tomorrow is my last working day) I'm rather chilled about it.

THAT can only be down to living on a narrowboat.

Thanks by the way for all your kind wishes - both here and by personal messages via the website and forums.  I'm really quite chipper about it.

The weekend was a necessary flurry of activity before I'm down to one hand - namely clearing out the man cave garage,  It was SO difficult deciding what to keep/try and sell or take to the tip. I ended up being quite ruthless (although I did sneak a fair bit into my car without Andy seeing)... (it's still there as I've no idea where it's going to fit on the boat) but I DID make 3 trips to the tip and the summer house is full of useful things that are to be listed for sale on Spock.

Anyway - back on the boat, before the rain came on Saturday, I set to and sanded down the side hatches which were already looking a bit tired - mainly due to US leaving them open when it rains... well that and the fact the morrells we used was NOT suitable for exterior use.. ahem. 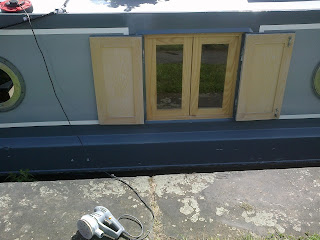 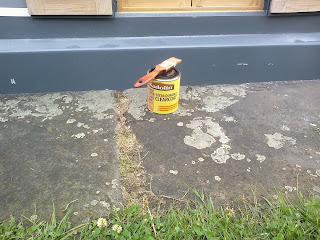 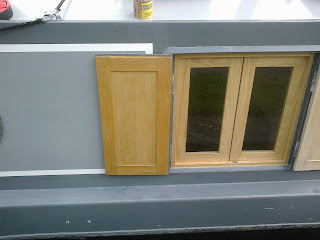 It's gone a bit orangey for my liking but after 3 coats, it does feel more waterproof than before.

INSIDE, I finished off the prototype tv cabinet - it'll do for now ... neither of us like it but it serves the purpose of hiding the wires and will have to wait until I'm better to be done again. 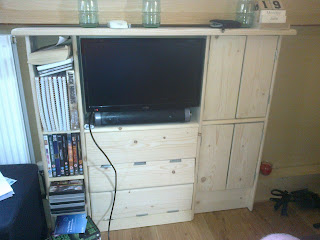 Having done that, I went back to the house and continued the life laundry (started many months ago) by clearing out my wardrobes and drawers...  3 bin bags full later of things to go (and another pile of things to take to the boat) and the deed was done.

I've thrown away all my grotty, knackered old work clothes (barring the shorts and shoes I'm wearing tomorrow - which will then go in the bin when I finish) and I've even chucked a few pairs of shoes away too.

Having thought it would be traumatic, I'm surprised ad how easy it actually was - I suppose having been living on the boat for about a month now, I've got into a routine of wearing/washing the same few things anyway. 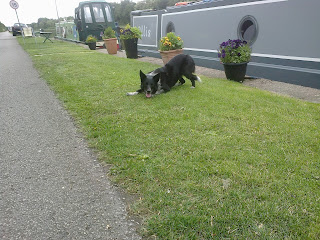 and Brynn (not sure how to spell that) 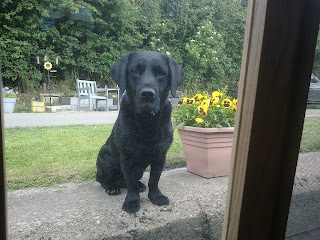 ever optimistic of a doggy treat when he appears a the side hatch twice daily during his walks...  (I usually give in but Andy is more stern).

Brynn's dad even turned up with a giant lasagne he'd made for our tea last night - something along the lines of "you poor unemployed people can't afford to eat so we'll look after you" lol.

Joking a side, it's a nice thing to do and greatly appreciated - LAST week (even before the news) he and Morag treated us to a lovely home-made Mousakka  (can't spell that one either)which we all ate over a bottle (or 2) of wine on our picnic bench as the world and his neighbour walked on by...

Right - I can't stay here chatting, it's been suggested by the boss I calculate my own redundancy entitlement which if he agrees, will just be passed to the accountant for payment... we're at opposing ends though as he wants to pay as little as possible (statutory caps etc) and I NEED as much as possible... it'll be interesting where we end up.

Until next time (one handed I presume)...

Good luck for the op and your last day at work. Two years ago I spent a couple of months one handed, it's amazing how you manage, just be glad you don't wear a bra though! Pip

ahhh Bryn's a very handsome dog, and not overweight by the look of him. You are very lucky with your neighbours/passers by.

AS for the last day - it was dull and not even a "thanks and good luck from the boss... in fact, he didn't even show his face - that's 15 years of loyalty wasted but hey ho. Onwards and upwards.

HE IS a lovely fella... NOT the sharpest tool in the box as even when we are both outside chatting or reading, he STILL comes to the side hatch in the hope of a biscuit. It's hard to tell from the photo but he had something wrong with either his legs or feet when a puppy so is a bit "stumpy"

His loss not yours. You have a new life ahead of you full of discovery, where as he... well!
I'd recommend keeping the moobs at bay for a while, although I found a front loader is a touch easier than a normal bra with one hand.