Redundancy ... or is it semi- retirement? and nepotism

It's not been a very good week this end.

WHEN I went in to work after what HAD been my longest break in 15 years, the remaining lad (1 got the shove on last Friday apparently) and I were called in for a chat with the boss.

To cut a long story short, he's decided to roll back the restorations business to "just a hobby" and as such Gav and I were told we're going to be made redundant... oddly enough, just that morning had his 16 year old nephew come to work with us... ... ...

Now OK, our longer term plan had always been to both quit our jobs and (after our year off exploring the system) begin running the boat as a hotel boat (if you've been reading this since the start you might have already picked this up).  NOT a luxury wait on you hand and foot boat - more of a 'come and spend a while living on the canal with us and meet the people, see the sights  and chill kind of affair.

It still smarts a bit though that after 15 years  as of next Wednesday that will be it - ODDLY enough Thursday is when I have my first hand operation and would otherwise have commenced a 12 week period of sickness absence whilst they recover...  TIMING wise, I think it's been done now because you can't make someone redundant whilst they're on sick leave.

On this occasion, I was able to follow my own advice and respond NOT react...  given that giving folks the push isn't an easy thing to do, I merely said that I think it was the right decision for the business - it's always been a money pit anyway... and assuming a fair redundancy settlement is reached, I'll walk away with good grace.... it doesn't look like a decent settlement will be reached however as he's been quoting the statutory minimum payouts - which are frankly quite poor as they are capped at 489 per week and I earn a fair bit more than that... ADD to it the timing (it's not actually 15 years until October, it'll round down to 14 years.

I'm disappointed in the way it's been done.

THAT said, on the plus side - given we had planned to resign and expected to walk away with NOTHING other than what we'd have saved, it will be money for nothing I suppose.

WHAT it does mean however is that we'll need to push on and begin trading a year earlier than we'd planned to - I mean, who is going to employ me with 2 unusable hands for the foreseeable future anyway? .

As soon as the worst of my hand pain is over, I'll have to begin making the subtle changes to the boat so we can separate the dinette (aka crew quarters) off from the main cabin a bit more securely and get around to building a proper website - I'd registered the Narrowboatellis.com domain a few years ago in preparation and just published a temporary holding page with a get in touch box.

It means we'll have to give some proper thought into planning a rough route/schedule where we'd like to cruise, along with some kind of on-line booking function... not to mention google adwords so it comes up when people search narrowboat hotels.

IT feels a bit odd to be heading into the unknown having worked full time ( plus) for the last 27 years but at the same time, it's very liberating to think that for the first time in our lives we'll be in charge of our own destiny.

MEANWHILE - this weekend is going to be a "garage/house" decommissioning project - I've already had the phone and broadband stopped so now it's time to tackle unneeded possessions and "useful tools" I've collected over the years.

Apparently I need to be ruthless when deciding what to keep/throw.

Luckily, Gav (from work until next Wed) is a hoarder and he's calling over on Sunday morning to look through the garage with me so at worst, stuff will end up in HIS garage for me to claim back if ever needed lol.

I haven't got any photos to go with what I've just written so here's a lovely snap I took the other night of a goose family from the side hatch. 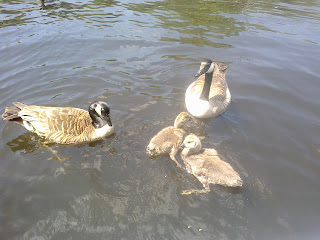 Well at least you're going to get an earlier start on your own path to future happiness, as one door closes...

I've been made redundant 3 times, so far, and each time has lead me on a different path of life I had never expected to travel along...

I wish you both all the best for your future :)

p.s. I still expect you to blog (even by proxy) during you post operative recovery LOL

I think it's appalling that after you've worked so hard for him for so long he can just say 'that's it'! He obviously doesn't want to pay you sick pay, it should be against the law to make someone redundant before a planned time off sick as well as during!
Hope the op goes well.
Kath (nb Herbie)

Make the most of your redundancy, and you will look back in time and think it was the best thing ever. Hope you can negotiate an acceptable payout.

Cheers - for what it's worth, neither of us are TOO bothered about it... other than in principle. We'll be fine and whilst we might have to alter the time-scales a bit, the plan/long term aim of living and financing our lives on the water is 1 step closer.

To be fair to him, he's going to pay me during my notice period anyway - just "claimed" he couldn't be bothered with the faff of sick pay. AS for the op, I'e been practising doing certain bathroom related tasks (ahem) with my wrong hand already so fingers crossed I'll manage lol

You're right - it would be too easy to get sucked in to a 'wo is me' situation... he's being a bit slow coming up with a figure - I suspect he'll wait until I've had the op and he thinks I'll NOT feel like a fight then... The sun is shining and summer is here - the perfect time to be out of work! :-)

I guess your blog may get a bit shorter when you have the operation on your hand, but please, please, don't stop it altogether, I feel like we're friends you know!

Ah yes redundancy...... paid for half of Waiouru! As one door shuts somewhere another opens. Best of luck with the boat venture :-)

You know what? I love the fact that blogs bring people together - regardless of their physical location... I've been playing with voice recognition software so I doubt a strapped up hand will stop me :-) - ok so the editing may get even worse (I notice I said "articulated rather than articulate" the other day) but we're all only human ... and to forgive is devine

you clearly had a better employer than I lol... you're right though - it's just a matter of grabbing hold of the frame using both good hands (oh dear I'm screwed) and pulling yourselves through...

It'll all be fine - just 3 more working days until freedom/pauperism !

Not forgetting all those unpaid hours you put in. But as above it'll be the best thing that ever happened to you guys.
Onwards as you so rightly put it.
Good luck with the op keep blogging.

Sorry to read this mate, but am sure good will come of it and you will be starting on your new adventure slightly earlier than expected, looking forward to seeing you both when you get going x

ah yes... the unpaid hours - he seems to have conveniently forgotton All about those.

I won't lie - I'm a bit scared about tomorrow but will pretend otherwise when I get there.

cheers fellas... Exciting times for you too with the new place.... I hope you're learning Mancunian? (however you spell it ;-) )