The return journey... and back online.

When it doesn't however, it's a right old pain.

Since Andy used up my 4g allowance on my works phone before we came, I quickly arranged for a new mifi point on EE with 32gb of data a month...   It HAD been working perfectly then for some unknown reason, the other day, it decided to stop connecting to the  internet... well I say "unknown"...ahem... cordless battery powered devices work well - assuming an idiot remembers they DO need charging.  IT simply didn't register that it kept turning off after a few seconds because the battery might be flat.

Right then - with that cleared up, what's been happening in the last few days? - well, we eventually settled down in Gargrave for a sunny evening watching hire boaters come through the first few locks and then panic.  We recall that feeling well.  6 hire boats in all made it that far in their first afternoon of hire from Skipton...  all roughly at the same time which did mean a little bit of chaos but it WAS well spirited and they all were having a lovely time. 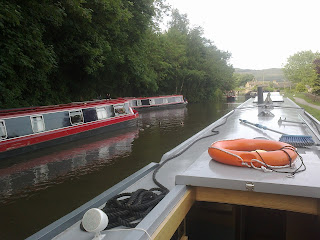 Whilst we were up in Gargrave, it occurred to me to get in touch with a couple we met briefly  the year before last (eek) when we'd accidentally stolen their long term mooring space when they'd gone to get some water.  It turned out, they'd bought their boat from the same place we did so it'd have been nice to tour each others boats and swap stories.  AS it happened, they weren't around on the Friday but could call in on Saturday afternoon.  We'd planned to head back to Skipton anyway on Saturday for a pork pie and tour of the castle so they arranged to call in late afternoon.

WHAT was the weather doing on Saturday? - raining of course (again) so after a couple of hours chugging in the rain we moored just after Gallows bridge 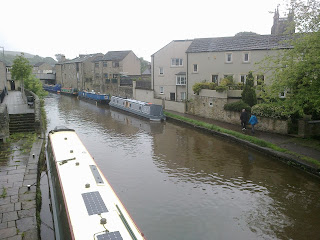 ... we ditched the castle visit and I bought a new waterproof jacket ... I also threw away my old boating one which had done me well but was now letting lots of water through.

We did however, buy some hot pork and apple pies - they were lovely. 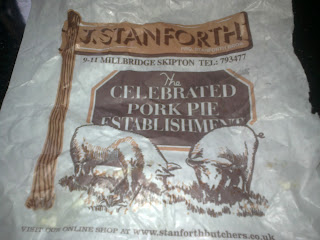 They didn't survive long enough to be photographed!

After another wet wander around the town,  we ended up back on the boat reading before Matt and Jess turned up.  It was a little disappointing not to be able to have a nosey around their boat but they did show us some photos of their progress.  They've had a lot harder job doing it than we did mainly because they were living, working and studying on it at the same time... we've been lucky enough to have the bungalow to go back to when the mess got a bit much.

Once they'd departed, we pulled pins and headed off back to Sildsen on the first part of our journey home.  AS it was getting later, the hirers had all packed in for the day and we had the canal to ourselves.

After a noisy night in Silsden - (due to some marquees and loud music), we set off quite early hoping to get back down the Bingley 5 and 3 .

There was however a little bit of a wait at the top due to a wide-beam work boating heading down. 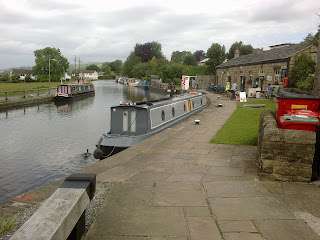 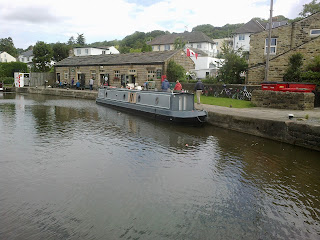 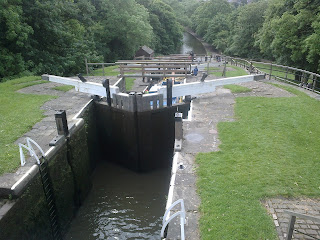 but at least the sun was shining now...

It's funny how people doing the same job can be SO different...  2 of the lockies were wonderful, friendly, helpful and chatty,.. 1 of them however was a bit hard work - quoting some regulation 5 that we would have to wait for another boat to come along and share a lock to conserve water.... I did point out that as 2 boats were waiting to come up, they're have to use water setting the locks anyway to bring them up so we may as well go down with one of them...  anyway, he was over-ruled by the other 2 who were more than happy to let us down.

Once at the bottom of the 5, we had another little wait at the top of the 3 where we encountered a stroppy fisherman who was RIGHT on the mooring bollards I needed when pulling in behind another boat waiting to go down... bloody idiot.  He had a bit of a strop when I pullled the boat in, forcing him to move...  and then did an emergency stop (well as much as you can with 17 tonne of boat) stirring up the water big style.... he got the message and moved after a few sulky looks. 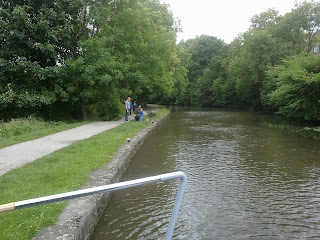 Once down, we were soon caught up by a bloke (who later introduced himself as "Dave") who, although not single handing, did have a wife recovering from surgery on board so we took him with us through the various swing bridges and a couple of locks into Apperley Bridge... not without the odd accident as he did crash into our boat a few times  - no major harm just a bit more paint (what with the wind we've taken off loads anyway on this trip) and he DID give us a couple of windlasses he'd picked up along his journey....

Waving goodbye to him, we moored for the night near where we did on the way up.  The wind (although bad enough during our journey) really did get wild during the night and we both agreed it was a relief to be on rings/chains  piling rather than on pins.

This morning, early on well head back towards Leeds to get through the rough areas before the scallies get up and start drinking again...  All being well, we'll get moored in Granary Wharf again and then meet up with a couple of friends after tea for a catchup.

Glad you enjoyed the pies. They are very good.
Pip NB Oleanna