I finished work a little early (although given I've been in before 6 every morning this week, it still owes ME) so we were able to make an earlier than planned start on our first proper cruise.

Having been inspired by Tony and Vicky's videos of their trip, I've installed a dashcam in the bedroo.m - don't worry... it faces OUT of the bow windows) and are recording the journey in 3 minute clips...  at some point when I'm recovering from my op, I'll label them all and put locks etc on youtube.  As I don't have any video editing software on this old laptop, I'll not be doing anything fancy with them....  Here's the start of the journey over the Stanley Ferry Aqueduct.

It was a lovely afternoon and although the boat is currently a bomb site, we ignored it and enjoyed the chug in the sunshine.

This time when we got to Castleford junction, rather than going straight accross we took a left on to the River Aire and headed upstream.  My phone was playing up and although I did take some photos, lord knows where they've ended up as I'll be buggered if I can find them.

By the time we arrive and Lemonroyd "big" lock to get off the river it was working again.... I'd been dreading this lock - having seen a video of how ferocious it could be.  Luck was on our side though as we were alone which meant I could hang right back whilst Andy worked the buttons. 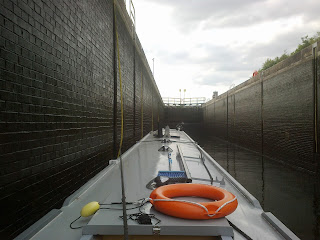 I looped my centre line behind the riser (if that's the correct term for it) in the lock wall and held on for dear life....  it certainly does fill up bloody fast  with vigour! 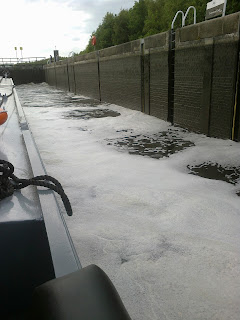 Once at the top, scouted around for a mooring for the evening and ended up not far from the entrance to the marina.  I'd not realised how close the railway was but having lived by the east coast mainline before, it wasn't really noticeable to us... some might not like it but we were fine. 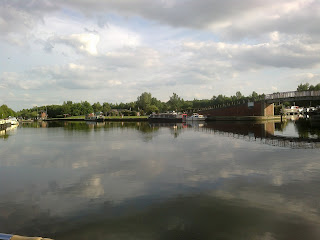 A lovely night followed by a lovely summer morning today. 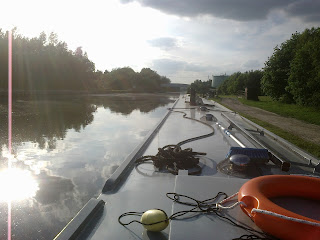 We were up and away by about 7.30 and the plan is to overnight in Leeds (Granary Wharf?) before making another early start to get past Kirkstall tomorrow.  The rain has arrived just as we were mooring up so that was quite good timing.  Fingers crossed for a dry start tomorrow.

The plan is now to to wander into  the city and have Sushi  - it's been a long while since we last did so it'll make a nice change....all being well, on the return journey we can meet up with some friends for a catch up.

Here's another video clip - this time of the "big lock" filling... brace yourself - I had to lol.

First thing (and I mean early doors - circa 6am which is actually a lay in for me anyway) we'll head off through the badlands and moor somewhere around Rodley tomorrow night...

Enjoy your first proper cruise. You may already know this but the two staircases have lock keepers and I believe they are locked when they are not on duty. It's a lovely cruise up out of Leeds, but definitely best done in the morning.
We've found mooring near the Railway Inn a good place at Rodley. Enjoy
Pip NB Oleanna

Have a Good trip Mark & Andy. We went to Skipton 2 years ago and we enjoyed it, hard work but good. I had just taken orders for the video in the bedroom till you said it was pointing out side ha ha. Enjoy the trip. Derek (lifeonthecut)

I've walked this section, just last year. Loved it. I hope you do too.