A Mixed weekend and little jaunt out...

The last minute finishing (ish) touches continued over the weekend - Saturday was an early start as Andy had offered to help another shop by covering an early shift  ... this meant a 5.10am alarm ... after which, I figured I may as well get on with jobs.

It was a bit tricky early on though as I needed to route some corners off the timber I'd collected to finish the tv cabinet - doing that outside before 8am would have been a bit inconsiderate to Clare (the woman on the boat behind/in front (depending which way we're pointing) and her new born baby. The baby btw, is quite bonny - especially compared to it's parents lol.

SO - I quietly set to assembling some planters Andy had been nagging me to make. 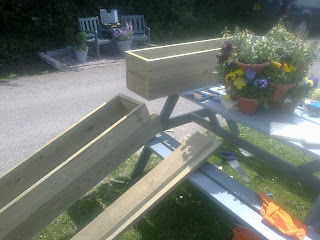 once more, made from offcuts from work - this time from the gratings (walkway) for the caterpillar that we're currently on with.

It's difficult doing things quietly ... it'd have been fine if we were moored in the middle of no where and I must admit to being rather frustrated.

Still the sun was shining despite the forecast for rain  - THAT came later.

STILL looking for quiet things to do, I remembered the little foam corners Andy had ordered from China to cushion the corners of the solar panels... they clonk on the roof in high winds/when the ducks do their morning dance routine on them.  They cost buttons and came with double-sided tape  - we'll see how long it lasts before coming off but I've got a few tubes of sikaflex remaining for which I'm saving up "jobs" for before I open. 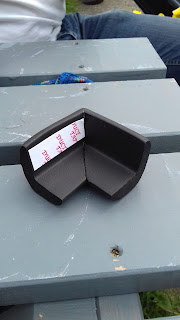 The sun was still shining nicely and as I'd done a washing load (on the batteries) - taking them down to about 65% the panels were putting in over 29 amps which is was good to see. 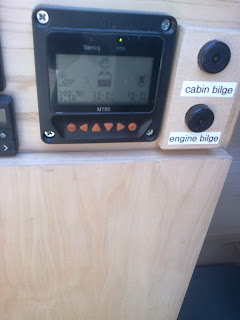 I also managed to get the lettering on the other side done - a lot less faff this time as there was no breeze AND I had an assistant. 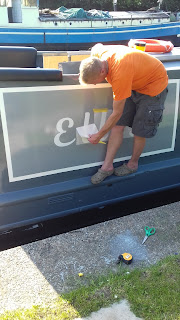 I still need to put the index number on but as it's already on the bedroom window each side, I'll get around to it  - WHEN I find them again!!!

What else? ... oh yes, you'll remember on 'Euro-vision night' the Ariel amplifier blew up and was frantically replaced with one from Homebase? - well, it's done it again... or rather it did it again when the batteries got fully charged.  Basically, its my own fault for using the boats 12v dc instead of using the ac/dc transformer that came with it... having to have the inverter on to power the thing seems SO wasteful though. 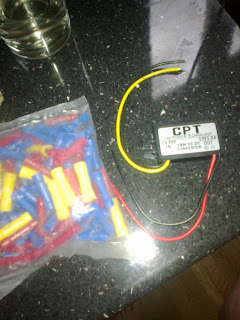 It regulates voltage coming out and keeps it circa 12.5... NOT anything between 12 and 14.6 which had been coming out of the (unregulated) supply from the panels/alternator.

I've wired it in and fitted the 3rd amplifier...  so far so good!

THEN the rain came... 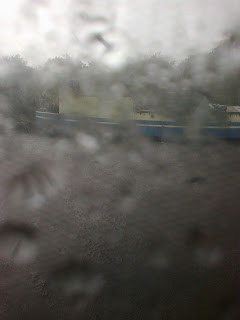 It's hard to see through the portholes, but during the storm we had 1ft waves lashing the side and hailstones breaking up and bouncing through the mushroom vents... a typical "Crick" weekend I thought lol.   - Which it was btw but we didn't go on account of our last minute push to get the boat ready.

THAT said, by Sunday Lunch, the sun was out again and we decided to have a little run out.  We went down towards Fairies Hill, planning to moor up before the lock landing for an over night stay and wander around... when we got there, a few other boats had been abandoned  beaten us to it, so we got brave and went through the big lock back on to the river Calder and downstream towards Castleford. 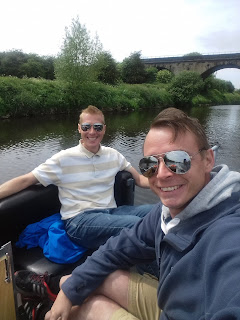 I really don't know why we 'd been so scared of river cruising before as so long as you watch out for floating trees, it's quite pleasant... and once passed Methley bridge it wasn't long until we came across Castleford junction where the rivers Calder and Aire meet.   The flood lock was open so we chugged straight across and into Castleford cut.  The visitor moorings were quite full but I'd spotted a space I thought we could fit in so turned before the next lock headed back.  A chap offered to move his boat if we could wait 5 mins or so but by now I was committed to the manoeuvre - fitting a 57ft boat ... into a 58 ft space WITH a large audience WITHOUT hitting either the piling OR boats either side...  I was WELL impressed and so were the people in the shiny boat behind lol.

Annoyingly, by the time we did our post mooring routine (read had a glass of wine) and went for a walk to take a photo from the other side, the buggars had moved THEIR boats to give us some space. 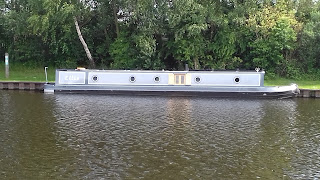 You forget how long the boat IS when you're used to seeing it from the back rather than the side.

WHAT did jar a bit though was the large boat on the opposite side of the canal starting up a generator around 7pm which went on until after 11.    Still, luckily it was only one night for us but I pity his neighbours if he does it every night!

I've still a couple of things to do before we head off to Skipton on Friday - well I say Friday but all being well, were going to go off on Thursday evening and with luck, moor over-night near Lemonroyd Marina, getting the nasty big lock out of the way.  I noticed a few drops of blue engine coolant under the calorifier pipe connections in the engine bay the other day so I plan to tighten up the jubilee clips and top up the system.  I haven't got any blue antifreeze but so long as I remember to add some before the winter, it'll be ok.  I also noticed the locking nut on the morso cable had worked a bit loose so I'll fettle that too whilst I'm down there.

Well done for your 'parking' skills. Snags ((drops of coolant etc) - I follow the blog of a couple wh've just moved onto a brand new boat (not fitting it themselves like you) and I've been horrified at the number of snags they've discovered since collecting it. dozens of small and not-so-small problems emerged. I guess maintenance on a NB is a pretty constant list of jobs-to-do?

I think you're probably right about always having a list of things to do... the knack (so I'm told) is learning to IGNORE them ;-)

Well done for getting away in the boat, I am following your build closely as we hope to follow in your footsteps soon. Didn't know you were so close to Lemonroyd we were up there looking at a sailaway last Thursday. All the best.
Phil

AS I type, we're moored opposite the Marina Entrance having gone through "the big lock" and stopped for the night... first thing tomorrow, we head into Leeds.

Good luck with the search.
Mark.