Bear with me - I'm having IT troubles at the moment in that my laptop keeps forgetting it has a wifi card... and no end of disabling/removing and reinstalling has done the trick - even a wipe and full reinstall hasn't capped it... what it has done though of course ir remove all the programs I've in stalled over the years and lost my favourites - SO MUCH for my back ups... grrr..

NOT to worry - any photos and important stuff is in the cloud so will re-sync itself in time.

WORK wise it's been a tiring week (again) but despite this, I've still made some progress on the boat.

AS you may recall, Wickes had that 15mm solid oak flooring on offer - SO I did a click and collect and bought 16 square metres... which should/might be enough to do the full boat with.

Having discussed it with a few other boaters, I decided to do my own thing and lay it left to right rather than front to back... no particular reason other than I prefer the look of it. 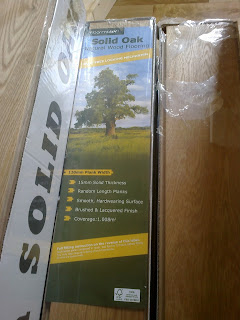 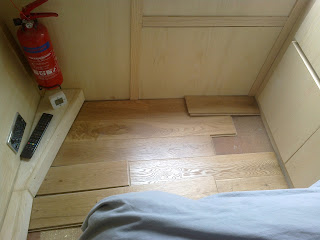 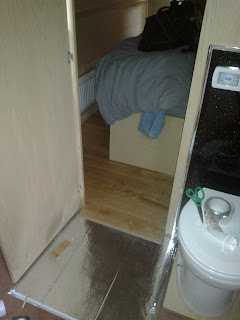 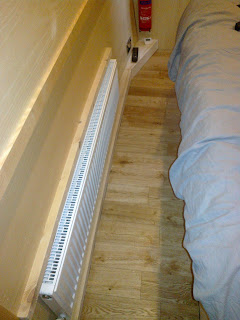 It's gone down quite easily and being glues and clickless is nice to work with... it DOES however, give me splinters easily when cutting it so my finger ends are rather sore now.
All being well, I'll get the lounge done over the weekend - although I do still need to get the starboard side into top coat having masked off the coach lines the other night before it rained.... the painting being weather dependant of course.
You'll recall (if you remember this drivvle) I'd lowered the height of the 'angry bed' so I could fit in more comfortably... which has worked well - well enough to order the proper sprung mattresses .  I've sold my soul to the devil to pay for them and they are expected to arrive next Friday.  They're coming from the Edwardian bedding company at Mexbrorough http://www.edbed.com/ so I'll report back on the result in due course.
BEFORE I can get back to the flooring/painting/talking rubbish with dog-walkers I've got an appointment in the morning to attend with the hand surgeon who will hopefully be able to confirm the carpal tunnel operations - my plan is to encourage him to do both at once so I've only got one period of recovery rather than 2... oh I know it'll be difficult to manage for a while - but I'd rather be properly feeble for 6 weeks once than moderately feeble for 12 weeks.  We'll see what he says in the morning.  At least this time, I'm not having to pay as it's the same bloke I saw privately but this time via the gp referral system... that is if their computers are playing ball tomorrow.
Who knows, if he's kicking his heels when I get there I might be able to talk him into painting with me for a few hours :-)
IN other news, Andy has discovered that Spock (can't spell it) car boot selling app for his phone and is currently selling everything in the house - Every time I get in from work 'something else' has gone - for buttons of course but at least we don't have to endure a month of Sunday mornings standing in a dusty carpark at 4.30am, whilst people try and climb into our boot!
Until next time...﻿
Posted by Quaysider at 20:06