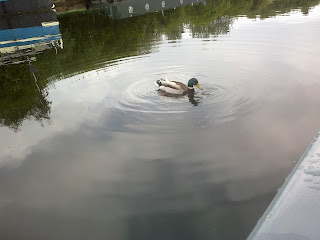 This fella (the one who dances on the boat roof wearing clogs most mornings from around 4.30 am onwards) seems to have lost his lady friend...  for the last couple of months  they've been coming for sunflower seeds and if we ignore them 'waterside' they hop out and stand on the tow-path peering through the portholes at us in a bid to get our attention...

I do hope she's alight ... just sitting on a clutch of eggs somewhere rather than related to the pile of feathers which appeared the other morning under the bird feeder... to be fair, they DID look more like pigeon feathers than ducks so there is hope.

ANYWAY - the weekend visit to the boat was quite varied - both 'job wise' and socially.  On Friday night when I left work, I came straight here (I'm sitting in front of the fire now whilst it's raining outside) from work and managed to get the coach line masked up  starboard side and 1 coat of the light grey on.  The plan HAD been to get up early on Saturday morning and get a second coat on before heading to see the Hand consultant (I'm sure there is a more technical term than that)
My appointment was 9.40 but there was no messing about ... perhaps because I paid to see him the other week he thought I was paying again this time lol  No matter - he's agreed to operate on both my hands.. starting with my left first.  I tried to press him to do both at once but he really wasn't keen - apparently for the first couple of weeks you really can't do much with them.  The good news being that as it's done in a private clinic, HE could book in the surgery date and fill in the paper work there and then - long story short, I get my left one done 29th June and around 6 weeks later, my right one (subject to the left being ok) .  He said as it's done under a local, I can watch if I like... I think I will.

When I got back to the boat (around 10) Mick collared me as I climbed out of the car to ask me to look at something...  apparently he'd found an otter in his welly.  Upon closer inspection, it appeared to me to be a ferret. 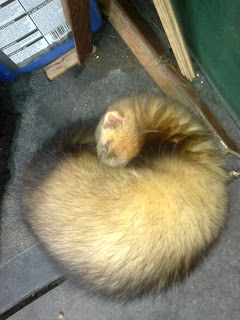 Lovely little fella - presumably someone's pet that was lost/escaped... he had no intention of waking up and when prodded opened 1 eye and went back to sleep.

Mick got his daughter to take it to the rspca to see if it might be chipped - it wasn't of course so it currently on HER boat whilst they work out what to do with it.

I'm sure our cats would enjoy playing with it!

After this excitement was over I got another coat of the dark grey on to the starboard side and then went inside to continue 'flooring'.

I must say, that glue less solid wood goes together really well - much easier than the awful (cheap) laminate we used throughout the bungalow.  I HAD planned to make a wine cellar at the bottom of the steps in the back cabin but given time is now short (pending operation etc) I'll come back to that in the future (perhaps).    BEFORE I floored over the back cabin, we needed to remove a bit more ballast so cut another hole and took out another 5 blocks... THIS time, I made  asked Andy to help with the heavy lifting... 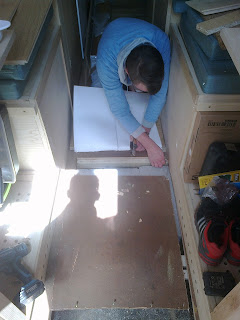 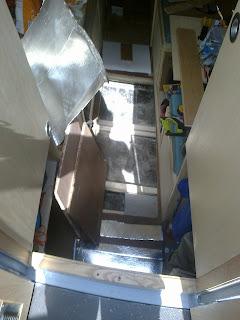 Having got the lounge done, it was time to watch Eurovision on the telly box....  THAT would have been fine were it not for the amplifier blowing up just before Dr Who started which necessated a mad rush into Homebase to buy another (identical one so as not to have to faff wtih the wiring).  If I were braver, I'd take back the broken one but I had bastardised the wiring to use the boat's 12v rather than the 230ac -12dc transformer supplied... as such, I think it probably didn't like the higher voltage whilst charging...   I bought a spare for next time  in case it happens again! 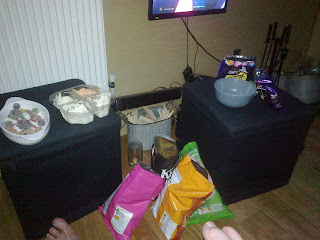 In days gone by we used to have a Eurovision party...  crisps, dips, chocolate and fizzy sweets on the boat is just as much fun!

On Sunday, we had made a team effort and finished the rest of the boat - barring the floor under the dinette tables... I'll do that one night this week. 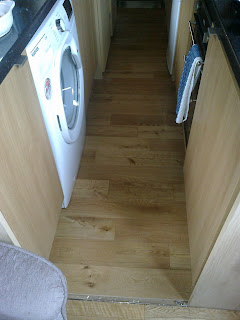 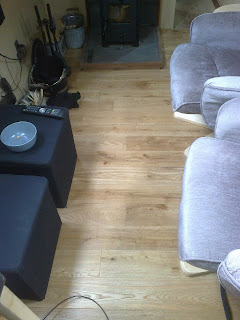 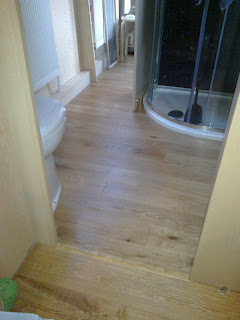 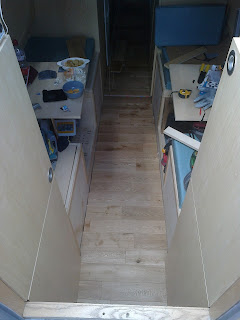 All I need to sort out now is some 'strips' to cover over the expansion gaps and the job's a good un.

Is it pre-sealed, or do you have to coat it with some kind of polyurethane?

It's pre-sealed... I'm going to go over the bathroom joints with morrells just to give it a bit more protection - I need to test a bit first though to make sure it can stick and also doesn't alter the colour too much.