A long weekend and some role reversal.

I'd meant to post the other night but as I mentioned, someone had used up my monthly bandwidth on my works phone... I DO have a private one but it's a bit "Fisher-Price my first phone" (without internet access).

So - the bank-holiday weekend.

You may remember at work we had 2 rides to deliver and install down in Margate... THIS time I made it very clear I would not be much use... what with my back problems (still not improved after the facet joint injections) and rubbish hands (imagine having a "funny bone" being knocked in the palm of your hand and you'll not be far off the pain) - ON that basis, the boss man agreed it'd be a waste of money putting me up in a hotel for a week if I would only be firing on 3 cylinders...  3 would be optimistic compared to my normal full steam ahead but I didn't say anything ... (most unlike me)

Having gotten out of the trek down there, we met at the boat on Friday night after work and agreed to get an early start Saturday morning.

As part of our plan to 'navigate the entire system', it made sense this time to head up the Calder and Hebble and instead of turning  in the Dewsbury arm junction , to go up it to the basin.

Usually when we're chugging, I captain the boat and Andy handles locks.  On this occasion however, AS my back and hands were already really bad (and I was self medicating along with a glass of wine), we decided I couldn't really be in much MORE pain so it was my turn. 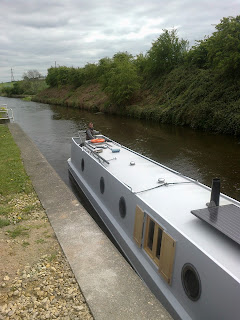 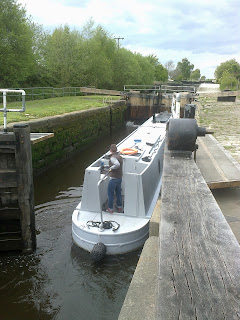 It actually made a pleasant change and it was quite good for Andy to realise that when you are in a lock with a bit of wind blowing, you can't always position the boat where you would like... or rather, where the crew member is suggesting you do.

This is Millbank lock (the shortest,leakiest and horribleness) on the system I think - the ground paddles are fooked and the bottom gates are 'bow-legged' at best.

This means in order to stand a chance of filling the thing, you have to be brave and do it quickly. 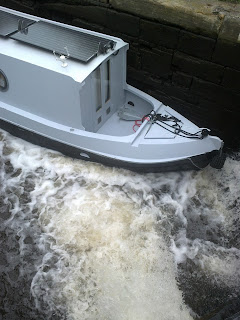 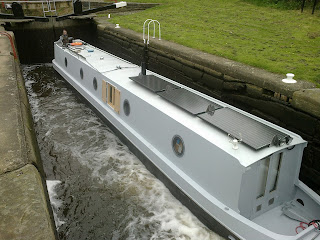 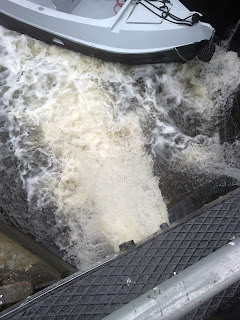 A few choice words were shouted in my direction but a greater understanding of the difficulties facing the driver was gained lol.

IT was agreed however, that on the return journey, as it's such a tight fit, I'd be back on the tiller.

We were soon (well about 3 and half hours after leaving our home mooring) approaching the Dewsbury arm and our planned destination...

It seemed like a sensible plan and despite the water being rather shallow most of the way, 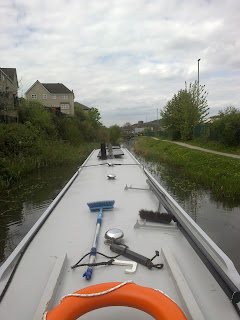 It wasn't too unpleasant.... until we came to where the winding hole was supposed to be -  Annoyingly, I didn't have the presence to take a photo but trust me... THERE really isn't a winding hole up there any more... or rather there would be, were it not for umpteen boats long term moored in it.  We therefore had 2 choices - reversing back down the arm or attempt a 46 point turn in the entrance to the basin.  DOING so of course meant we 'kissed' a few boat's fenders in the process - what with the blustery wind that got up and an audience it was all a bit stressful - made more so by Andy's attempts to help with the boat pole failing due to the sudden "deep water" from no where - the ruddy thing wouldn't even touch the bottom!

No matter - we made it and then headed back down - noting in the Nicholson guide NOT to take the boat up there again unless its for work at the boat yard.

Once we got back to the  mainline, we turned left and headed back towards Horbury  - the wind had picked up quite a bit so rather than tying up near the Bingley Arms (the intended watering spot for the evening) we continued to a more sheltered sport just above Broad cut top lock.  Were we were later joined by a nice Braidbar boat AND a hire boat containing 7 drunk and annoying enthusiastic and high spirited chaps - who tried to turn the boat around ... where the canal wasn't wide enough - the result being them wedged sideways across it.  NOT in the mood to help out physically, I did however suggest that once they'd gotten un-wedged, if they wend down the lock they could either turn just after/under the waller bridge or a bit further down at the water point.

About an hour later, they re-appeared pointing the desired way .

AFTER a noisy (wind wise) night, we decided to continue with the painting  - Taking the solar panels off the roof (again) for the penultimate undercoat and whilst Andy was doing that, I began the gunwhales in their first gloss coats. 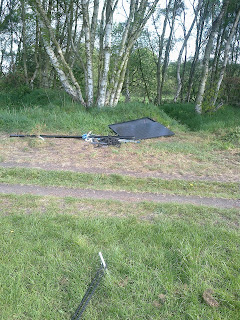 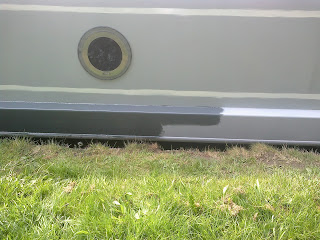 The observant will also notice I've painted a white line - the plan being to mask it off with Frog tape and then paint either side.  It WAS a good idea... just badly executed as when I came to apply the tape, in parts the line isn't wide enough.  Hmmf... oh well - at least when I do the other side, I know to paint it wider.

The paint has gone on OK but as before, the mosquito are a problem.  I'll just have to keep rubbing them down and repainting until  you don't notice them.  It's a good job I'm not a perfectionist - opting again for the "it's near enough for a country spot" approach. 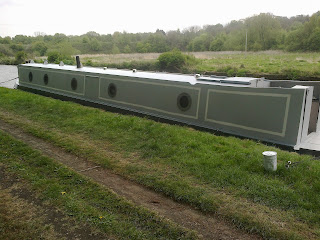 On Monday morning, having studied the weather forecast, we made an early start (to beat the rain) and pulled pins about 6.30

It was a cold but nice start to the day and the chug home pleasant enough - although Thornes Flood lock off the river was closed which did cause a little hiccup.  As the flow wasn't very strong, it wasn't too much of a problem. 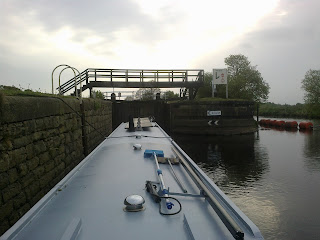 The rain never did arrive and by the end of the Bank holiday we'd managed some MORE painting... 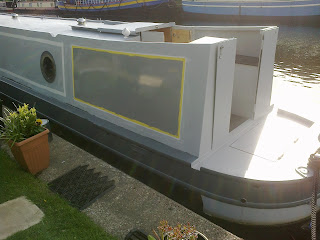 Each night after work, I've managed a bit more rubbing down and more painting so as I type this, the entire port side has had at least 2 gloss coats.  All being well, tomorrow night, I'll get a 3rd on if the weather is ok and remove the tape to reveal the white lines underneath (and extent of the required touching up to be done)... THEN I'll don my scuba gear  turn the boat around and begin the other side...

Did I mention we REALLY are bored of painting now???

The boat is looking good, I haven't painted a narrowboat.....yet but always use http://www.toolstation.com/shop/Painting+%26+Decorating/d150/Masking+Tape/sd3295/Prodec+Advance+Precision+Edge+Masking+Tape/p75346
When painting up against another paint. I think it gives a better finish than Frog. Keep up the good work. Phil

you did. This boat is going to be an amazing work of art when finished. Will you have a meltdown if another boater makes a dodgy move and scratches it? I didn't know you had ambitions to cruise the whole of the network- great. I wasn't foolish enough to think I could walk the 2000 miles of the network but I've done the C&H, Aire&C, and Pennine loop to Manchester. I walked the Dewsbury Arm last year and then carried on past your moorings at Stanley Ferry. The only bit I failed to walk was just before Wakefield (Flood lock?) where the towpath is on the left and then the navigation turns right and there's no bridge. You would have to go over some metal steps into an industrial estate and then work your way back to the canal where it emerges from Fall Ings lock. I had a dog with me who would not countenance the nasty metal steps. She's too heavy for me to lift. Happy Days.

Hi Heather. You're very kind but trust me... it doesn't bear up to close scrutiny - it would have done in a dust/fly-proof shed but on a windy tow-path, we're making do. I know what you mean about that bridge - I'm not so keen on it either...besides, the route isn't very clear anyway - and once you get to the next bit of river, it's even harder to find.

BACK to the painting grrrr!

cheers Phil - I'll try that on the other side. The frog tape was rather expensive and I used 2 rolls just doing the port. AS for better finishes ... *coughs* we don't aim for perfection - up in't yorkshire, "it'll do" :-)