It may seem trivial to you - but "sometime today" between 9.30 am and 4pm WHILST at least one of us was on the boat 'near' the whirly gig, some thieving scum towpath walker with no scruples, has stolen - yes, I repeat STOLEN a pair of my Calvin's off the washing line.  It's not even like they were a good pair but they WERE a comfy one if you follow...  grrr...

It's  my own fault of course for being uber organised and having 2 loads of washing on the line next to a busy foot path...*note to self - peg out washing on an afternoon when I get home from work rather than the busiest day of the week.

I wonder if I should put up posters offering a  reward?

So - AS expected, we didn't get ALL the jobs planned for the weekend done ... we did make a good fist of them though.  BEFORE that however, I can report back on 2 wonderful nights sleep on the new mattresses.  Thin they me be, but boy are they supportive and SO much better than the memory foam they've replaced - which incidentally, Andy has already sold on that Spock car boot app he's become obsessed with... *ponders whether he's SOLD my freshly laundered undies*.... ... ...

Saturdays weather was ok ish to start with with rain forecast around lunch time... with that in mind I decided to take a chance and get some paint on.  I also removed the masking tape to reveal the coach-lines  and this time NO paint came off with it - although there are a couple of areas where the grey had leaked under it...  nothing too major so they should easily touch in with some white. 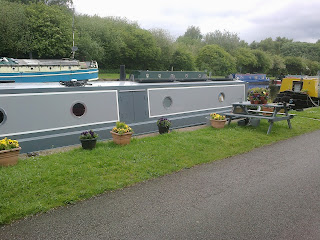 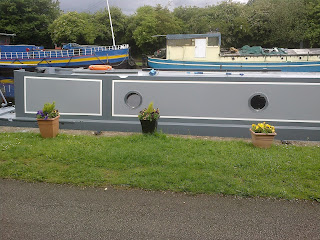 Once done, I nipped down to the water point to fill up and then turn so we're facing towards the prevailing winds...  the boat rocks less that way AND we can nosey who's walking the towpath (looking out for would-be undie stealer's) from our chairs as we watch TV.

I MUST get a better camera/phone as I took the next 2 photos from a mere 50 ft away but by the looks of them, it may as well have been 500 ft away... 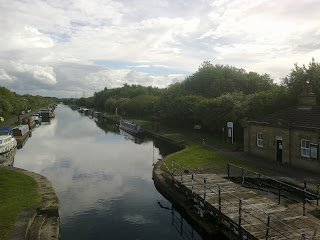 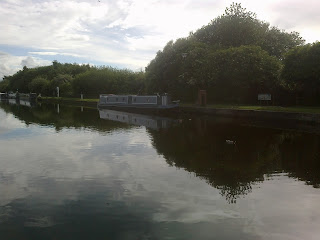 Only the front doors and back to do now and with luck if the weather is OK tomorrow night, I'll get one of them done.  Whichever one is left will have to wait until Wednesday as on Tuesday, the tenant for the bungalow is coming to sort out contracts etc.  AS Andy predicted, given the boat is nearly done, we've decided to move on board THIS summer and rent out the house earlier than planned - that way we can save a bit more in preparation for our adventure proper.

Whilst the paint was drying (before the heavens opened), I finished off the flooring under the dinette tables and also continued with the simple edging. 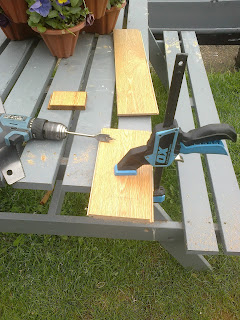 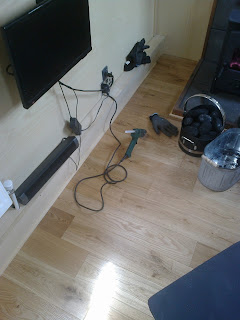 It's turned out quite well.  Nothing fancy, just simple honest edging to cover the gap, whilst allowing the floor to move.

I've come up with a cunning plan for around the quarter circle of the shower...  I'm going to buy some rope, soak it in varnish and then "stick" it around the edge to tidy it up.  I hope it works ok. 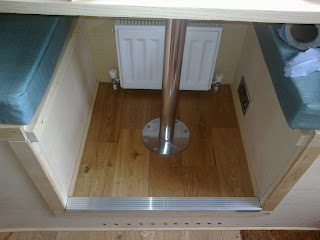 Oh I forgot to mention - LAST weekend, Denise and Barry (our old next door neighbours and friends) very kindly came for a flying visit to the boat to bring the completed cushions .  Denise pain-painstakingly unpicked my terrible attempt and re-used the original fabric ... MAKING a really lovely job of them.  We're SO pleased and ever so grateful to her for her hard work... and having tried I KNOW it will have been hard work.

"I wonder if I should put up posters offering a reward?" Yes I think you should. It will at least lead to some more conversations...