Does it count as mutiny when a self appointed ships' captain goes against the crew's wishes?

You may remember that having "given in" many moons ago about building a cross bed, I did just that...   the acceptance being that by having a cross bed, no one ends up pushed up against the hull's wall.

The reason it's called a cross bed has buggar all to go with it's direction oh no.... it's called a  cross bed because if you are taller than 5ft 10  it's impossible to sleep in without banging your head or getting your feet wedged under the gunwhale (NOT the same one obviously) and the gradual lack of sleep/disturbed nights makes you really grumpy and cross... well it has done in my case.

Now ok, it might have been a mistake on my part building it higher than required with a view to getting the largest  possible poo tank under it,  Whatever 'cause' the problem needed addressing as whilst I could sleep diagonally, that does rather depend on the cooperation of ones partner NOT trying to do the same.

ANYWAY - Having decided on Friday night that enough was enough, when I arrived at the boat I began frantically dismantling the bed with a view to lowering it as much as possible. 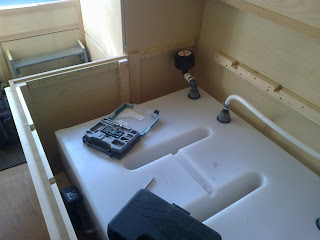 I'd already worked out that the problem was going to be the rinse-out hose connected - it being vertical and requiring a gradual bend in it ( thus taking up the spare room).

Having called Leesan the day before explaining my dilemma they very kindly offered to send me an elbow - free of charge!  Good show.  Given their candour, I used the opportunity to order a spare charcoal filter for when the time comes - so a 'free bend' ended up costing 50 quid but it WILL get used.

It arrived on Friday morning. 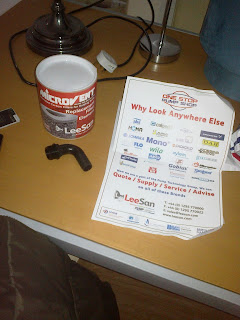 When I put the bed frame together, obviously the tank wasn't in situ.  This meant a lot of faffing around with a stubby in order to undo the sunken screws. 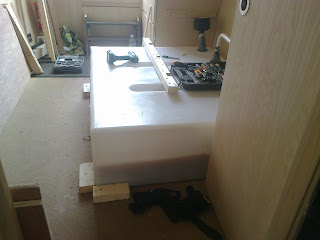 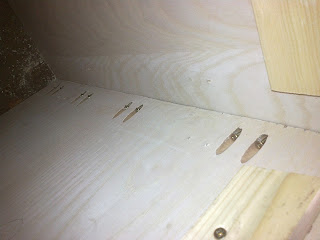 The next bit was going to be unpleasant - as I'm sure you'll agree when you realise the tank was half full (half empty?) - Having thought about it, I decided to head off to the pump out station to empty and rinse it before "undoing" the fittings... a bit of a waste of a pump out card but given the circumstances, it's not exactly a luxury.  LUCK however was on my side a when I got there, the previous users must have put it on pause and forgotten... ergo, a free pump-out.

Annoyingly, with the bed carcass removed, even when 'empty' I could see slurry (that's a nicer name that I first typed) still in the tank... we're going to have to alter the ballast a bit more or get a couple of people to stand on the starboard side whilst the pump-out is in progress!

I held my nose for the next bit - 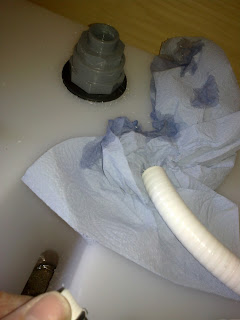 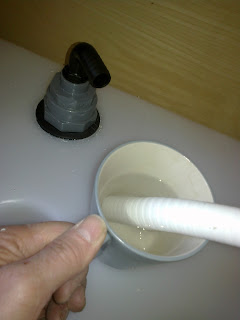 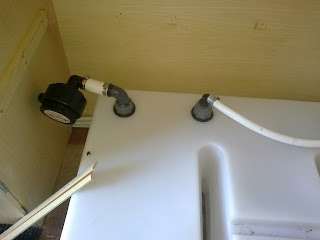 and it was all done.

I then cut off 4.5 inch off the base of the bed and re-assembled it.  I can finally now fit and sleep well in the bed.

I other news - the painting continues and I removed the masking tape off the coach-line whilst at the water point yesterday ...it was a good idea but poorly executed I'm afraid as either I put the tape on too soon or took it off too late... in patches it's removed a layer or paint which will mean a fair old bit of touching up .

On the bright side though, from a distance of 6 ft or more, it looks ok! 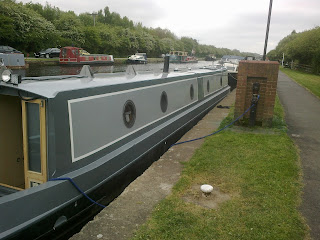 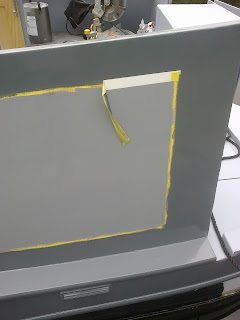 My final job for the weekend was the 250 hour oil/filter change...  I'd already planned ahead and bought 25 litres of the Morris Golden film for just short of 100 quid the other week.  It came in a large container rather then 5x5 as I'd assumed... not to worry - I finally found a use for my jiggle syphon and whilst it WAS slow, it wasn't messy. 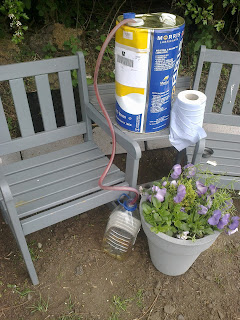 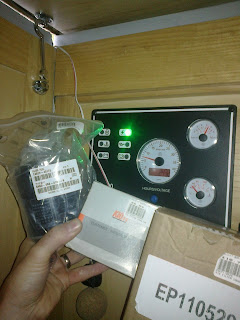 NEXT job, laying the flooring...  I noticed Wickes have  a 15% May discount offer on ... Here's the stuff we've got in mind.  http://www.wickes.co.uk/Wickes-Milanas-Oak-Solid-Wood-Flooring/p/138979
It's thinner planks than normal so it should be easier to fit... famous last words!

That oil seems rather expensive!

Thought ours was bad for our Volvo Penta. Perhaps not as it was only £45 for 25 litres!

Masking tape should be removed as soon as the paint has tacked off to avoid your problems.