Wakefield to Skipton ... Silsden - Skipton in a gale!

AS you'll recall, Yesterday was my 45th Birthday (eek)    MANY thanks for the birthday wishes ... I don't celebrate them to be honest but they're still nice never the less.

Had we not already arranged to meet our friend in Skipton, we'd have stayed put The reason of course being the truly awful weather...  I don't mind rain, snow, sleet,hail or sunshine - but mix any of those with a gale force wind and 10 swing bridges with awkwardly placed landings (by awkard I mean side on to aforementioned winds), the journey was truly awful.

I came the closest I've been to falling in... not from careless foot work OR attempting too big a leap.. no.  Instead, it was the elastic cord on my old scruffy Berghaus jacket which got caught on cabin hook 'mid leap' off the boat on a windy bridge landing... Andy could barely help for laughing!

Having composed myself I vowed to cut it off!

Before I forget - here is another photo of the interspecies family from the other day. 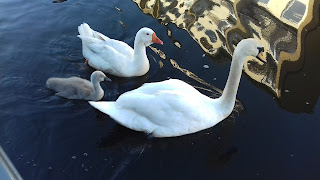 We can't reach agreement as to whether the infiltrator is Goose or Duck - Answers on a postcard please!

Also, missed from yesterdays posting were these photos of "Kennet" Andy took as we passed her. 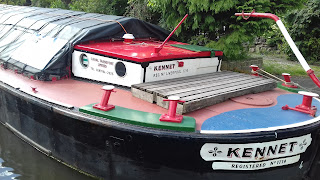 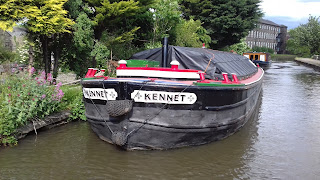 Judging by the bow, I think Tim West has driven her a couple of times ;)

As a result of the awful weather, my phone didn't leave my pocket so there aren't any photos of the journey as per... apart from this snap 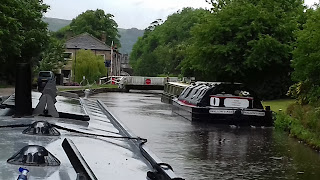 taken in the rain and then later our "new family" which came visiting for early tea..... 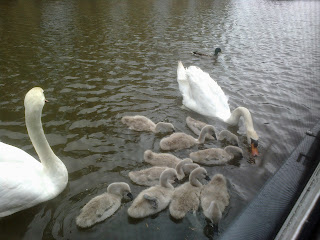 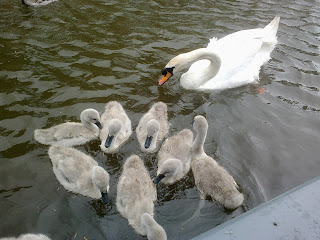 They've just been back again today too  - still raining btw.

Late afternoon, my oldest friend turned up to visit and after a few hours catching up, we donned our jackets and braved the weather again in search of somewhere to eat.  Neither her or Andy were drinking which meant I could have their share ;-)

After a false start in the Heriot hotel (where we all agreed £6.50 was too much to pay for a small portion of Jam roly poly) we ended up in a curry house instead and shared a lovely meal together... weather still awful and no reception on the tv OR radio, bed time was about 9 pm.

Today we've stayed put and searched out dvds to watch in charity shops... oh, and I've bought a couple of audio cables to enable the computer and tv to share the sound bar.

AS for Andy, if you can't hear the snoring coming from the chair next to me - you're lucky!

the mixed family, my postcard: I think that's a goose, a gosling and a swan. Compare the cygnets in the 'new family' pic and it's hard to tell, but cygnets have a slightly longer (more joints) neck. But the interloper I think is a goose of the domestic type. I used to have 2 white ducks so I can claim a little bit of expertise, but, to be honest, not enough.