It's been a busy week - I've been ticking off little jobs here and there...  On the easy list was using the 'sticky stuff remover' we've had lurking under the sink for eons, to clean off the masking tape residue left over from the Christmas lights... I thought I'd got it all off but when I looked again, there are still quite a few bits remaining - hmmf!

Oh well,  there's plenty left so I'll have another go when it stops raining...  writing of weather, we had a sudden return of the snow on Thursday which caused chaos in town - cars were abandoned all over during the morning rush hour...  luckily for us, we didn't need to go anywhere until about 11am, by which time it'd had all melted.

I finally also got around to attaching those 4 folding steps (to use as foot perches when we're sitting at the back of the boat. 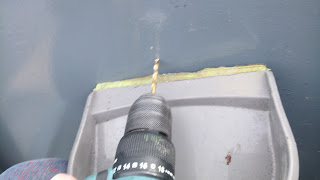 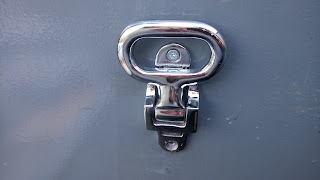 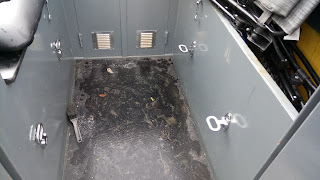 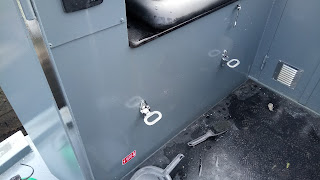 For once I actually had the good sense to hold a dustpan under the drill to stop the swarf going everywhere... alas, once I'd finished drilling, I stood on it and flipped the swarf all over - hmmf again! 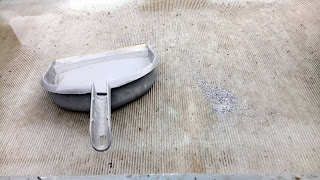 They're just the right height to perch your feet on when chugging around - they ALSO double as a raised floor/engine bay roof that will allow me to do servicing in the engine hole when it's raining, without getting drenched. 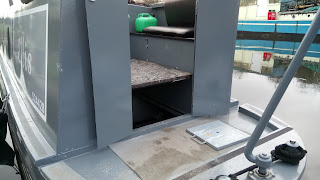 The cats have now gone off to be re- homed - I won't lie, it was a bit of a wrench... especially as the woman that was SUPPOSED to have them changed her mind and left a note on her door to that effect when we arrived with the cats and their belongings.   Having psyched ourselves up to pass them over to new owners AND with George still not happy, we made the even more difficult decision to let the RSPCA find them a new home... initially we thought of using one of the small local cat re-homing centres but on thinking it through, decided they'd have a bigger audience by being with the RSPCA.

On taking them to the new premises on the outskirts of Leeds, we were pleasantly surprised at just how nice the cats home is... CERTAINLY much nicer than any of the local catteries they are used to being sent to when we go away.   Sox was straight out of her carrier and made herself at home in no time but George was his usual reluctant self.  The good thing is that they are quite close to the front, so the first person to see Sox and give her a cuddle will have them - they've promised to home them together and everyone person we saw there, seemed genuinely passionate about cats and their care.  We've done the right thing we're sure but it does feel weird without them.  Just look at George though - any more fur off and he'd freeze! 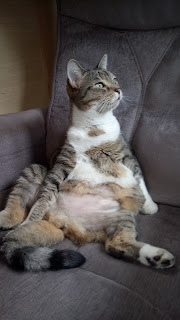 A sad end to the week but it's for the best.

LAST NIGHT, we were invited for drinks on a large boat further up the cut to say goodbye to some recently made friends who are leaving and heading off to a new mooring.  We drowned our sorrows well and truly and as a result, today have  not been very productive.  I think it was about 3.30 when we got back on-board Ellis. 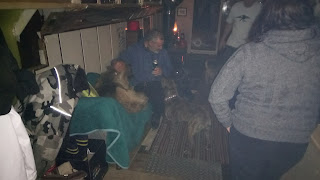 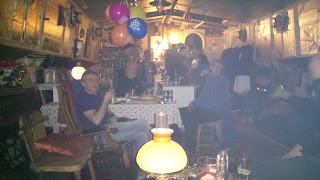 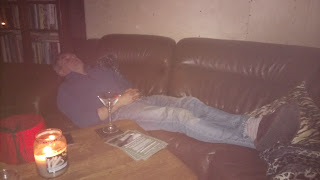 You can tell when it's time to leave though when one of the hosts goes to sleep.

It was an enjoyable sociable evening and  nice to spend time with other boaters... and their dogs. I'm coughing badly today though as being the non-smoking minority, did mean exposure to rather a lot of smoke... it was only for one night but it does remind you how smoky pubs and night-clubs USED to be...

They've gone now and here they are sailing off to pastures new... presumably feeling as rough as we do! 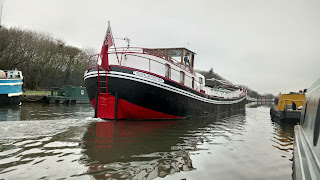 Once they're settled (and we have free time) we'll take Ellis up to York to visit them...

I use a magnet when I am drilling steel on the boat to hold all the swarf together. easier if you put it in a piece of cling film then take the film off with the swarf

WHAT a good idea - I've got a sea-searcher so will try that next time... Cheers.