It's only weather... but a good excuse not to do jobs and rude poetry!

Ok - since I last moaned here blogged, the country has been gripped by snow.- It's called Winter!  I remember (as a child ahem)   - (and it wasn't THAT long ago) my folks driving us down country back lanes in a mini, through single track roads - cut through 7ft high drifts either side to visit my gran.... a few inches these days and everything grinds to a halt.

Now all right - perhaps back then, local councils allocated larger amounts of their budgets to highways maintenance/clearance etc.  Why? - perhaps cause back then they didn't have to spend SO much of their budgets on social care issues and by saying social care issues, I mean everything from home-helps to care in the community and everything in between.  Also, "back then" in general, folk didn't expect the state to look after them quite so much as they do now.  Why? - because society itself did...  people DID look after their neighbours... people did "ask an old person's advice" rather than insisting on seeing a doctor because "Chesney has a cold or a tummy ache"... people DIDN'T phone an ambulance when their child was having an asthma attack just because the parents had been drinking - instead, they might phone a family member or a taxi to take them to hospital.

I'm moaning I know -... the point is that there was more money available "in the overall pot" because PEOPLE accepted some (not all) responsibility for THEMSELVES.

This has been evidenced on the the news a fair bit by "good souls" in 4 x4's ferrying medical staff in to work at hospitals and the like... and WHY not? - surely that IS the thing to  do.  The kind of thing a boater would do - such as checking our neighbours have enough coal /water and food.... (ok so by that I probably mean checking they have beer,wine and gin in stock) and doing our bit of gritting to keep access clear in case someone (or us) needs an ambulance or whatever.

Due to the weather, I've been doing on-line jobs, inside jobs (not cleaning - that can wait a while longer until it warms up so that we don't have to have the fire on 24/7) and playing in the snow.

I ordered some folding steps (don't know what their nautical name is) to fit out the back  - NOT to use as steps, but to use as a foot perch when we're chugging along sitting down. 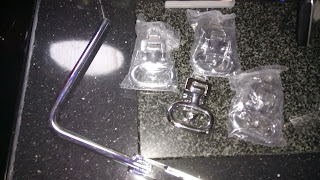 The original plan was to tap a thread in and us M5 countersunk bolts to hold them on - having thought about this *read discovered my m5 tap is knackered* plan B is use the same bolts but with a nylock nut on the back.

Of course I WAS going to do it this morning but it's raining (well at least the snow will go faster) so that can wait until it drys up.  Instead, I've finally gotten around to start finishing off another little job I've been ignoring a while - filling in the missing bits of oak flooring in behind cupboard doors.... it's only the odd 2 inch bit here and there and now I need to get an edging strip to finish it off... well I say need to get one... what I mean is find the ones I've already bought that have vanished  are safely stored somewhere on board.! 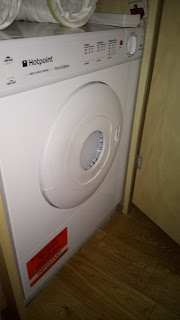 In other news, it looks like the cats have  a new home lined up and will be moving, this week.  Whilst it will be sad to say goodbye to them, we know it's in their best interests. George's belly is nearly totally bald now as he's still stressed and over grooming. We could have kept Sox as she's adapted better than him but as they're brother and sister, we'd been holding out for a new forever home for them together.

We've also missed the last 2 "wine Wednesdays"... however we did make up for it with a "beer, Wine and Gin Thursday"... 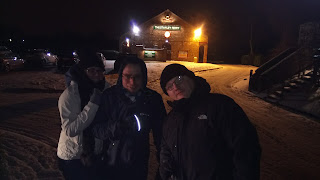 on the way back to the boat, "someone" insisted on making a snow angel - the amount of dogs I see weeing here, NOT being enough to stop him.  Suffice to say, every item of clothing has since been through the wash! 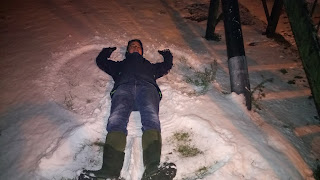 Once back to the boat, Sox was introduced to snow...  she wasn't impressed and ran off on to Claire's boat behind in a bid to avoid the white stuff. 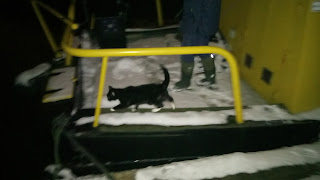 In TOTALLY non- boaty related news, my folks finally gave in this (last week) and had a stair-lift fitted...  I'm SO relieved.

It's hard enough for my mum falling over regularly  on the flat but  at least the danger of a tumble down the stairs killing her, has been removed.  I noticed when i called in to visit the other day and take some early mothers day flowers (she gets a glut so taking some early means a longer period of enjoyment), a duster on the floor ... I think the plan being that if she takes a tumble and has a while to wait until my dad or niece returns, she can at least do a bit of house-work whilst she's down there.... good planning or what?

Oh hang on wait I forgot the rude poetry.

IF you are offended by adult themes then don't bother reading this next bit...I didn't write it but it did make me laugh out loud.

The missus bought a Paperback,down Shepton Mallet way,I had a look inside her bag;T'was "Fifty Shades of Grey".Well I just left her to it,And at ten I went to bed.An hour later she appeared;The sight filled me with dread...In her left hand, she held a rope;And in her right hand a whip!She threw them down upon the floor,And then began to strip.Well fifty years or so ago;I might have had a peek;But Mabel hasn't weathered well;She's eighty four next week!!Watching Mabel bump and grind;Could not have been much grimmer.And things then went from bad to worse;She toppled off her Zimmer!She struggled back upon her feet;A couple minutes later;She put her teeth back in and saidI am a dominater !!Now if you knew our Mabel,You'd see just why I spluttered,I'd spent two months in tractionFor the last complaint I'd uttered.She stood there nude and nakedBent forward just a bitI went to hold her, sensual likeand stood on her left tit!Mabel screamed, her teeth shot out;My god what had I done!?She moaned and groaned then shouted out:"Step on the other one"!!Well readers, I can't tell no more;About what occurred that day.Suffice to say my jet black hair,Turned fifty shades of grey.

So glad your cats have a new home to go too. I hope they settle quickly and are happy. Hope you settle quickly too, not looking for them and that you grow accustomed to the noises that still happen that had attributed to them. Pip x