This time however, it's the contents of them... not my own thank goodness but Andy's...

In view that this is not listed as an "adult blog"  relax there will NOT be a photo of the offending thingyamy bobs in this posting!

So - to sum up quickly... Thursday found Andy waking up with pain and the beginnings of a swelling in one of his 'nads... by Friday morning it was nearly grapefruit sized and in agony.  OFF we went to  A & E about 6 am...  by 11, he'd been seen by 4 different people who all had a good prod and poke at the poor thing.

She (the rather pretty but wasted on us registrar) said she didn't think it was twisted but he'd probably damaged the sack of the epididymis,  which had lead to an infection.  They took blood and urine , prescribed 2 weeks worth of antibiotics along with diclofenac and told him wear the tightest underpants possible for a couple of weeks. but if it got worse, come straight back to A & E. We we home by lunch time.

When Saturday morning arrived, things we no better so a day wearing tight undies, taking the pills and laying in bed was in order.

By 7pm things had gotten worse so back off to A & E we went again - on the advice of a respected medical friend of ours...

A & E on a Saturday night - even early on is not nice... there are SO many people in there that should not be there... people with cuts that I'd slap a bit of new-skin on and a plaster etc.  OR when working on the fairground stuff, wrap up in gaffer tape to finish the job.  Anyone in there who the nurses know by name SHOULD be being dealt with by the mental health team imho.

ANYWAY - by about 11 it was agreed he'd be taken up to surgical assessment to see someone.  It turned out to be the same woman he'd seen the morning before which was good as she could see the deterioration for herself.

She decided to hook him up to IV antibiotics and morphine and he was to spend the night in a chair... (there being no beds).  I left him to it about 2am and came back to a cold boat as the fire had gone out... my own fault for not thinking to make it up when we left. hmmf.

THIS morning (Sunday) he ended up on the 6th bed (in a ward of 5) with a screen sharing a pod .  Poor chap had spent a very unpleasant evening and was nil by mouth - pending a scan this morning and potential surgery 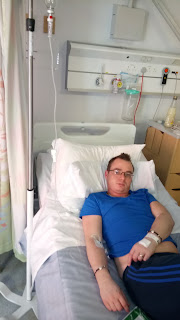 Not long after I got there (around 10am) they took him down to ultrasound to be scanned.

Whilst he was away - given there wasn't really any room for a chair, I hopped on the bed and promptsly fell asleep ... being awoken by a woman taking my blood pressure.

ONCE I'd explained I was not the patient, she left me to it... alas, a few minutes later a rather cross lady came and told me in no uncertain terms it was not acceptable for me to be in a patients bed. (I was on it not in it AND was cleaner than him - having had a shower and change of clothes.. unlike him)...  ANYWAY - I was to  pull up the "naughty chair" and sit on it to await his return... which took an awful long time!

The scan shows a small tear but not serious enough to warrant surgery - the swelling should respond to the anti-inflammatories and stronger antibiotics and with luck he'll be leaving hospital later today with the new pills and some morphine to control the pain.

I WAS going to paint the roof of the boat today but that might be seen as insensitive so that's now on hold.
.
Until next time - when hopefully PANTS won't feature!
Posted by Quaysider at 13:49