I'll start with the important thing first.  AFTER my favourite undies were stolen off the washing line last year, I've been a little reticent in regards hanging my smalls (well now large's) out to dry... preferring  to have them adorning the radiators around the boat OR a quick tumble dry.

Well, whilst I was crouching around measuring up the existing TV cabinet on Monday I felt that now all too familiar ripping, as cotton under high tension  14 year old cotton, lost the will to go on.

Do you think they'll mend?

No, neither did I so I cremated them on the fire to give them one final use.

Having began the grieving process,  (AND already considering which were to become my 3rd favourite pair), I began work on a replacement TV unit to distract me.

The original unit was OK but being made of pine rather than Ash, it always just looked a bit wrong... well that and the fact I'd used the wrong hinges for the flaps - behind which the media pc lives.

It also wasn't QUITE deep enough to fit DVDs in behind the cupboard doors.  So, this one was to be about 3/4 inch deeper.

I'll come clean - the REAL reason I decided to remake it was that anticipating I'd mess up the underpart cupboard in the bedroom, I'd over ordered the ash face mdf to the tune of about 50 quids worth... and having no where to store it, it was a logical good use of it. 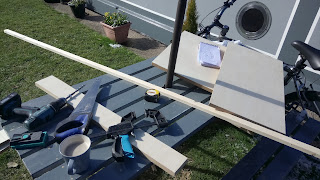 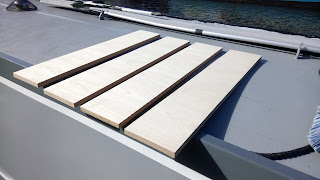 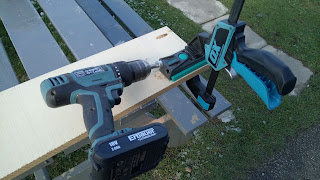 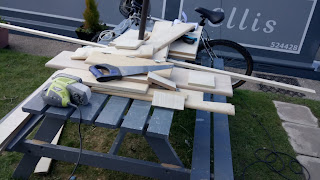 Whilst the weather was favourable Andy also took the opportunity to have a go at the mushrooms with that "peek" stuff.  They've come up quite well considering it's the first time they've been done since the boat was built. 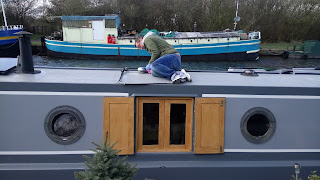 A few more bits of cutting and edging strips applied, and  they were ready for some varnish. It made sense to press-gang utilise the willing crew, whilst I carried on outside. 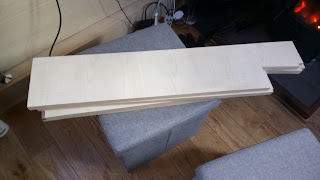 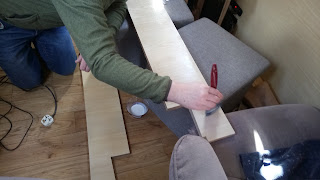 Once dry, (that water-borne lacquer only takes about 10 mins to be touch dry) I began assembling the unit in situ.

I did make a bit of a cockup mistake whilst distracted nattering to Joan outside - I edged the CUT side rather than the perfectly straight side of the top... and didn't notice until I'd no more bits big enough to do it again.  It's tolerable and I suspect most folk won't notice. 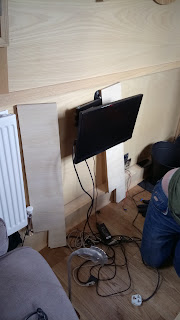 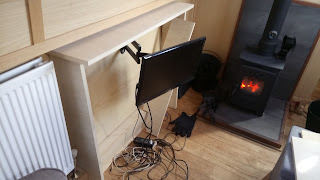 I'd had enough by now so abandoned it until the next morning.

Bright and early I continued and fitted everything into place.  It was a bit of a faff sorting out the cupboard doors and in the end, rather than having 4 (like the predecessor) I binned those and settled on 2 larger ones. 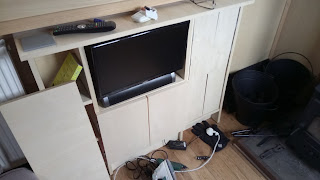 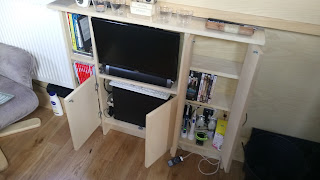 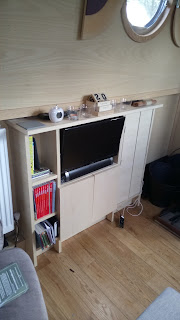 TODAY - as the sun is shining again, I WILL get the rest of the blacking touched up - I did manage to apply the fertan rust killer the other day so the surface is already prepared... I don't know for sure whether it will need another application- given it's had a few days of exposure to the weather... for the time that it takes to dry, I think I will... just to be on the safe side.

BEFORE then however, I'll nip and get a couple more bags of coal ... just in case the weather does turn as nasty as the scare scaremongers are suggesting.

It's just 2 weeks until our Maiden voyage now - we can't wait to set off!

That's two posts in a row with pants in the title. Have you discovered you get more hit that way, or something???

lol - if only... although realistically, my pants haven't excited anyone in a long time!