Time is galloping again - there's nothing major left to do  to ready the boat for it's (its'?) maiden voyage on the 3rd...  The important things - licence, safety cert & insurance are done... in fact, when I finish this, I think I'll put the "hotel boat" license in the window.

The "patient" (that's an oxymoron if ever) is still on bed rest and therefore not able to assist is still driving me mad - more so since he downloaded a "bell app" for his phone... ... ... prior to that I was receiving frequent the occasional text request to fetch this/that or the other.  If that bell continues to ring it'll be interesting to discover if it's still audible when inserted somewhere the sun don't shine thrown into the cut!

Another thing on my list was to fit an additional usb charging point high up in the galley so as to be able to have a led light shining down and also to charge up the 3 mifi point (for guest use)...  we've asked  visitors not to get carried away streaming video files as it is capped at 20gb a monthly on contract.

The easiest way to get power up there was to tap into the cooker "spark" feed - it's got a very thick cable  (to avoid voltage drop) and I've used twin core 5 amp cable which should be enough (given the usb sockets are 3.1amp combined) 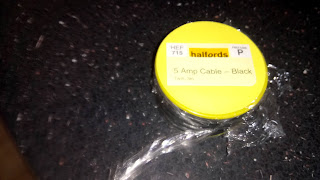 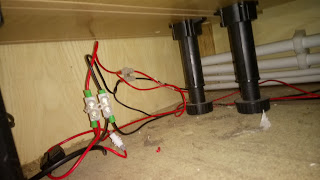 NOT my neatest bit of cabling I'll grant you but it is under the kitchen units.  NOTE I've STILL used a fuse AND ferrules....  since I took the photo, I've cable tied the wires to the wall and screwed the connectors down too. 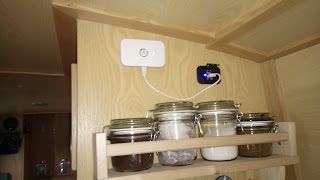 it works well enough.  You might also note, I've changed the shelf to the (recently acquired) ikea one - leaving the supports in place to cover up the screw holes made by it's predecessor.

Other little jobs have included yet MORE touching up of paint (when it's not been raining) and also fitting a new charcoal filter into the toilet tank vent pipe... it'a amazing the difference that makes to the whiff outside.  They last about 12 months and cost circa 50 quid from memory... worth it though. 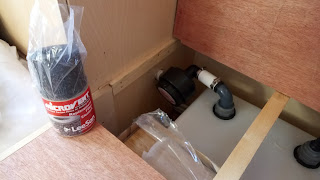 The weather is doing her best to make things difficult though.  I've still got some hatch runners to fit outside and then paint along the side of - it rained again most of the night and looking out of the porthole this morning, it doesn't look promising for today either.  YESTERDAY however, it also caught me out with a sharp frost... when I'd let the fire die down over night. Still, the insulation is obviously quite goood as even with no embers in the grate, it stayed near 19degress inside whilst it was minus 2.2 out 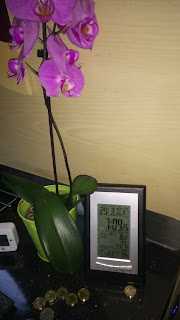 Right - I'm off... I need to think of a way to protect the pump out toilet wiring in the guest wardrobe... when I say protect, I just mean from a "pushed in the bottom holdall" affair.  I've got a few bits of wood left so should be able to fit something in.

Spelling error in the post title? Or are you breathless after all that work? :-)