It dawned on me when clearing out what is going to become the guest wardrobe, that whilst we've been careful NOT to damage the wiring loom at the back of the pump out toilet, it WOULD be easy for someone else to wedge a holdall in the bottom of the wardrobe and unintentionally, pull out a wire or two. 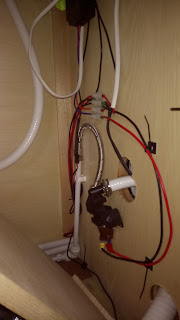 you can see how easily that could happen,

SO, a bit of simple boxing in was required. 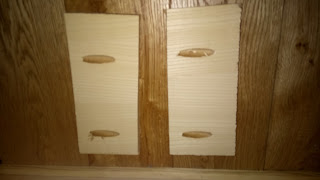 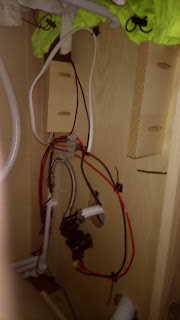 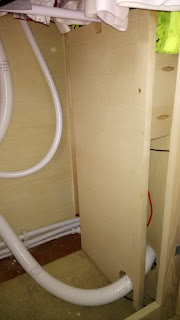 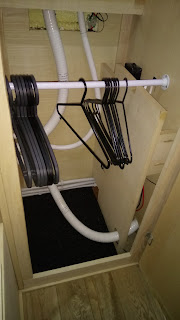 I still need to fit another piece at the back to protect the connections to the pump out fittings but as rain stopped play *and I'm not allowed to saw in the boat* that will have to wait.

Also on my list of things to do, was measure the air draught of the boat - to ensure we'll be able to get through Standedge tunnel later in the year when we head over the Huddersfield Narrow canal.

Using my Heath-Robinson measuring device I determined that the highest point (that can't be easily removed like the ariel can) is the top of the solar panel brackets... 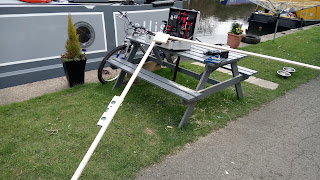 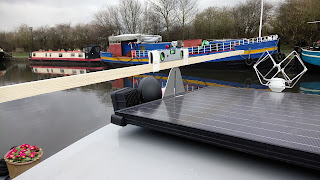 This was WITH the water tank full and the loo tank about half full.  In reality, I think a couple of bags of coal in the well deck and a repositioning of a couple of the steel ballast weights should or might be sufficient to bring the bow down.  The general consensus is that it'll be OK.  Worse case scenario is having to take the angle grinder to the brackets before we go in - I've half a mind to do that anyway and  rivet the panels horizontally.  The few extra amps you get when tilting them towards the sun, is hardly worth the annoyance of them banging on the roof in the wind or being used as a "see-saw" by the ruddy ducks on a morning.

Going back inside, I also decided to carpet the crew wardrobe at the rear AND fix  bit of ballast in position.  To keep the boat level, I placed a steel slab in the bottom of the cupboard/wardrobe ages ago.. this was fine when it was just being used to store groceries in - now it's going to have a couple of storage units with pull out drawers in, we needed some extra height. 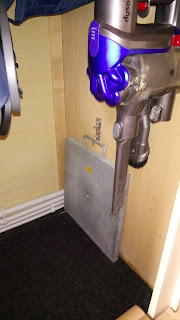 Simple but quite effective and can easily be removed.

ANOTHER little job that I've been ignoring was one of the porthole shutters in the front cabin - the hinge had bent a little and sagged MORE than the others... they've all got a bit of movement in them but this one was the worst. 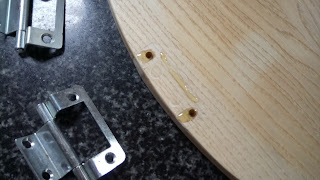 Of course replacing the cranked hinge, did mean the screw holes would be loose so I dribbled a bit of expanding wood glue in to give it something to grip to.  It seems to have worked OK and the shutter is back in position now.

The final job I did yesterday, was to burn some old financial papers AND Andy's work uniform - him now having left Sainsburys...  Turns out if he'd been near a naked flame wearing it, he'd have been bbq'd quite easily.... 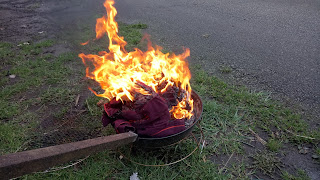 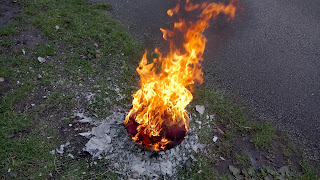 Really looking forward to hearing how it all goes! Good luck and l hope it all goes as hoped and planned. Paula x

cheers Paula. The River has thwarted our original plan which means we have to go the other way... and can't go very far but we'll make the best of it on the Maiden voyage... I suspect we'll don our waterproofs and drink gin - from breakfast onwards lol.