We're quite in love with Saltaire now...  having finally found a bit of towpath with enough depth of water/lack of obstructions in it) we tied up a few hundred yards from the beautiful church. 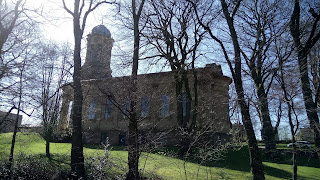 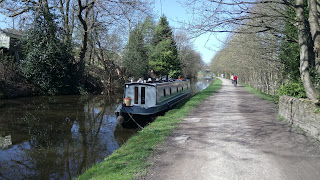 The towpath here is SO busy...  the early morning joggers begin about 6 am and the late night "stagger homers" continue when the pubs close - none of the noise being menacing though and for the most part, everyone passing by being really friendly.

Of course, the sun being out DOES make all the difference - it's just a shame there are so few places you can pull up along side and even when you can, you still have to leave the back end to wander out in order to avoid scraping noises all night.

Whilst we were tied up (loosely) we noticed the canal pushing us about a bit - shortly after, we spotted in the distance "Fair Maiden" (I think that was the name) pushing the canal our way. 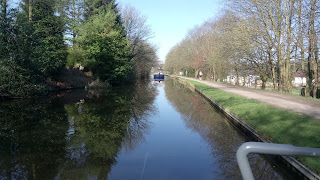 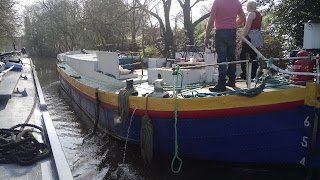 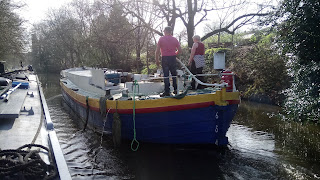 We exchanged a few friendly words as they passed by and they commented too on how few places they can actually tie up.  Still, at least they'll have made a bit of a path through the bottom of the canal for us to follow in a couple of days lol.

I received a text from Ebay/ Argos to say the new TV Ariel had arrived in Shipley branch and was ready for collection...SO, on the hottest day of the year so far, off we set following google maps...  Once collected, we did a reccy on the station so as to be able to direct our next guest to the canal/Ellis the shortest route.

Once back on board, I fitted the new Ariel and we went walking again - this time the other way and did a lovely circular route up the towpath, across the aqueduct (ignoring the sewerage works) and then down the side of the river Aire  to Salts Mill.

It really was a lovely walk and felt like mid summer . 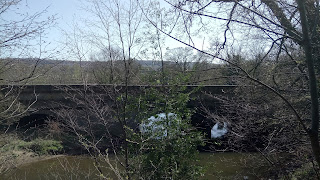 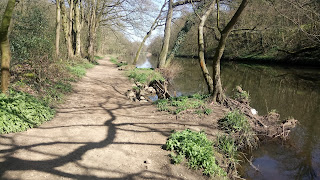 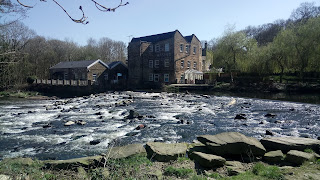 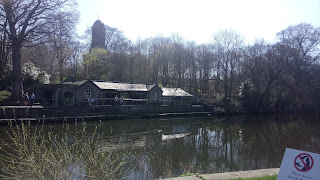 It's a shame Saltaire doesn't do more to encourage boaters to stay here - and by that I mean making a few decent depth areas where boats can actually tie up easily... AND a water point somewhere between Dobsons Locks and the top of the Bingley 5 would be helpful too.  Hence why we're heading back to  Apperley Bridge today as we need water and have some rubbish to get rid of.

I think they had a bad experience a few years ago and decided they had to keep the boaters moving on rather than forming a linear housing estate.