After a peaceful night - well I say peaceful... our new friends introduced us to a board game they'd brought along with them called Rummikub  and it turned out they were quite competitive - certainly compared to my "we're all in this together" approach.

It's actually quite good but a little complicated for a divvy like me someone of my limited mathematical ability... doing sums WHILST drinking wine is not easy... it'd be hard enough with a cup of tea.

The only "round" I won was one they played FOR me whilst I was dishing up a Sunday Roast (on the wrong day of the week.) 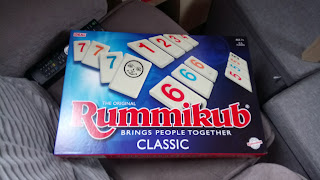 Anyway - when Thursday morning arrived, the sun was shining, birds were singing and the river had dropped considerably.  Not quite into the Yellow before breakfast but shortly afterwards it did so we pulled the ropes through, got the life-jackets out and set off upstream. 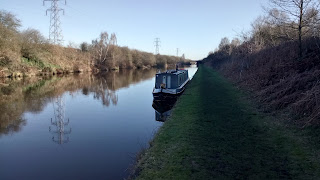 There was quite a flow and we all kept our eyes peeled for torpedoes ahead (in the form of tree trunks etc). 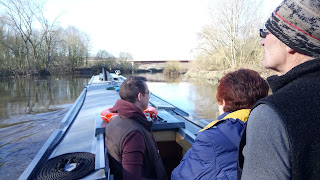 BY the time we tied up at Fall Ing lock however, we were quite pleased to be getting off it as up there, the board was showing red still . 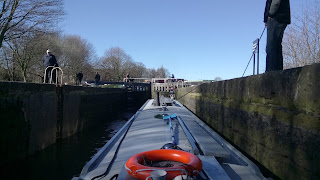 As we ascended we got chatting firstly with a lovely Australian chap who was stranded the other side of the lock and then encountered a crt chap who could at best be described as kurt/grumpy.  He basically gave me a telling off for being on the river in red... harping on about it invalidating our insurance etc etc.  I DID point out (more politely than he) that WHEN we got onto the river at Stanley Ferry Flood lock it WAS in yellow... ergo, it's not our fault either a) their boards are inconsistent or b) it had risen.

No matter, the plan was to go up to the town centre, have a nosey around the Hepworth and have lunch before we considered returning whence we came.

By now it had warmed up and we spent a pleasant few hours having coffee, Hot-cross buns and chatting in the sun. 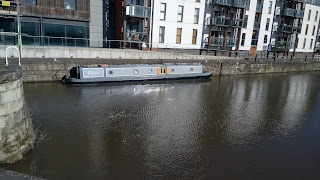 On walking to the shops, we spotted a "rather large twig" that had come down the previous day when the river was angry - I'd been chatting with the chap who's boat it'd gone under on route and he said it fair shook him...  can't imagine why ! 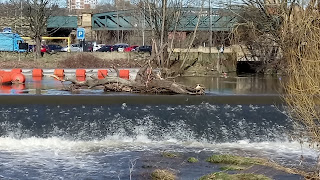 About 2.30 we set off back towards Fall Ing and were pleased to see the water was now back in the Yellow there too.  We could see there was still quite a flow so we proceeded with caution - having both gates open AND Andy walking Ellis round holding the centreline tight to the lock landing... the idea being to prevent the front of the boat being taken with the flow and a difficult return to pick up the crew....  it worked a treat and before long we were tootling downstream in tick-over to maintain steering.

Aware of the flow, I didn't offer to let anyone else take the helm and considering how long it took to bring the boat to a stop (think braking on snow in your car) that turned out to be a wise decision.

Rather exciting but safely under control at all times - shan't lie though, I WAS relieved to get back onto the canal.

The downside  being that this marked the end of the Maiden Voyage and it was time to say our goodbyes. 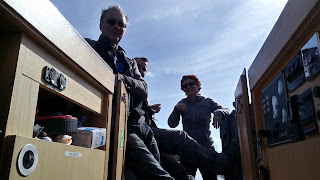 Before they left we asked for some feedback from them.  Kathie's candour was appreciated and it was useful to hear a woman's' point of view... things we're not thought about like having different coloured towels for couples so they didn't use each others un-knowingly... Things like additional hooks in the bathroom and bedroom too - all of which we've addressed with a trip to Ikea over the weekend *note to self - DON'T go to Ikea on the last weekend of the Easter break - EVER, EVER again*.

They genuinely enjoyed their experience with us - as we did with them and it was lovely to read their feedback on facebook.  All in all, it was a positively enjoyable experience for us and confirmed that what we're doing to finance our life afloat WITHOUT working in a proper job IS a good idea and something we'll settle into nicely.... I mean,who in their right mind would describe  boating as work?

When back on our mooring however, the sheen was taken off slightly as we discovered Andy's bike that was chained to the picnic bench had been stolen whilst we were away...  blooming scrotes... Having filed an on-line theft report (for all the good it will do) there was a box for "any other comments" and I'm afraid I couldn't resist putting a comment in there about hoping the brake cables fail and whomever took it has a nasty accident.

ON the plus side though, a friend is donating an unused bike and meeting us in Leeds next week to drop it off... STRONGER chains required this time me thinks.

Now we are all set to begin the first long trip to Liverpool on Tuesday and we're really excited about it.

I love reading your blog and really pleased your maiden voyage went well all the best for your new venture over summer. Enjoy Rummicub it’s the best game ever!

Thanks Barbara - we are addicted to it now... more worrying is the "loser forfeit"... I have a feeling I'll be doing Dark Blue AND light blue jobs for a while.

Hello, glad all went well with your first guests. But oh no, you've become Rummikubians! Dogless and me were introduced to it by friends and we're hooked, unlike Scrabble, which he won't play anymore! It's a level playing field. Enjoy your new venture.
Jane Nb Paneke

and there I was expecting a "knacker related" enquiry lol.

I do quite enjoy it - certainly more so than scrabble as neither of us can spellllll ;-)

Ha ha, dogless advises me I have a weird interest in Andy's nether regions so I avoided the topic, hope all is as it should be in that area now.
Chin chin
J. 🍷