Exaggerated reports of "ropes being cut" in Apperley Bridge...

Leaving Saltaire, we set off back to Apperley Bridge on the most beautiful Saturday we could have hoped for...

It was a pleasant cruise and we spent most of it at tick over.  We did have a problem with a local gate on the triple staircase (I forget it's name) and it took me an age to fish out most of the detritus blocking the gate paddle.   We bumped into a few local boaters we know and some others helped us down the staircase... mainly because they were by now all waiting to come up it! 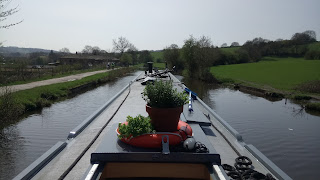 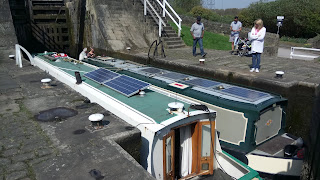 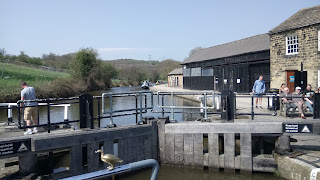 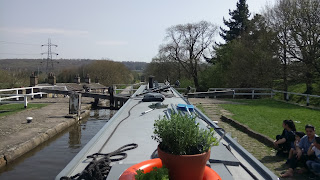 I was able to reciprocate at Dobson's staircase later on as a couple of solo boaters descended.

Since we set off from Wakefield the other week, we've bumped into a few boaters - all keen to warn us about mooring in Apperley Bridge due to boaters having their ropes cut by scrotes.  Now whilst local knowledge IS always important - sometimes, it should be taken with a pinch of salt...

Why am I bleating on about this? - well, IF we'd have listened/acted on the various Chinese whispers (no offence to Mr & Mrs Chinky Chonk intended) we'd NOT have stayed in Apperely bridge for the last couple of days.  HAVING spoken with "proper locals" it turns out that yes ONE boat had it's ropes cut but it HAD been moored above Dobsons Lock and the perpetrators are already known to the boys in blue...  bored dope smoking youths - and whilst being bored /doped up isn't an excuse for anti-social/criminal behaviour, it could  be interpreted as "youthful hi-jinks"... we were all young once ... although I can't remember that far back personally!

ANYWAY - point of order...  Having spent a couple of days moored here AND witnessed Saturday evening  patrols (for want of a better word) by local PSA's  would like to state we've NOT felt unsafe at all.... NOR seen any anti-social behaviour.    IN fact, I'd go as far as to encourage people to come along here and support the local Marina /chandler and coffee Shop...

WHILST I'm on a rant on the subject of the boat yard here...  I'd phoned ahead ( twice as the number in the OLD Nicholson's belongs to the old owners not the current ones) to check the price of diesel - using a fair bit at the moment with the heating coming on early to save keeping the fire in now it's warmed up a bit...  The bloke I spoke to (in Crick as it happens) said he wasn't sure but he thought it was 70p a litre and whatever declaration folk want.

ON arrival (Saturday afternoon I think ) Rob the chap who runs the place (and coffee shop owner) said it was 96p!!!  I explained when I'd phoned I'd been told it was 70p ergo, as we didn't actually NEED any, we'd give it a miss.

Helpful chap - phoned the boss man who explained he'd got muddled and told me what HE pays for it... even that seems dear given we get it from a garage up the road for 64.9p.... I'm waffling.  LONG story short, he'd sell it to us for the "moorers rate" which worked out at 85p... STILL expensive but by then we'd tied up, boarded another craft to get in and  Rob had gone out of his way to be helpful - ergo, we got some.

I picked up a flier for their coffee shop and whilst my photo of it isn't the best, you can read the opening times and their phone number... it's a bright, clean and friendly place. 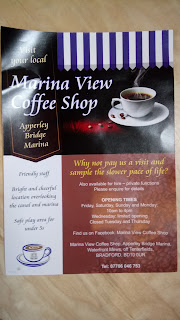 Having spent the last couple of days here, today we need to do a shop in preparation for our next guest  who joins us tomorrow in Shipley. We'll give the boat a bit of a clean and tidy before we head back up Dobson's lock to fill with water and then end the day back in Shipley .

Incidentally, when on the visitor moorings the other evening, there we were sitting out the back with a glass of wine watching the sun go down and a boat came in behind us (it'd been out for 5 days I think)

It's crew meticulously cleaned/polished and tidied it before departing the following morning... we  think it's a share boat (Paradigm Spirit) - and if you're lucky enough to be a part owner, we can vouch for how much effort and attention to detail LAST weeks users put into readying it for the next ones. 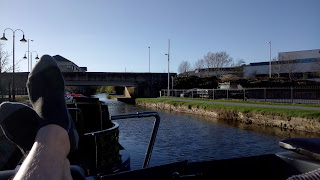 we were exhausted just watching them!