New Guest arrives and brings with her the rain...

After some lovely summery weather of late, winter Spring has returned and along with it Rain, Rain and more Rain...  We don't mind the rain too much but when it's with wind (of the meteorological kind) it's a bit pants.

Hey ho...  such is boating.  We'd returned from Apperley Bridge and spent another night moored in Saltaire - THIS time, accompanied by 4 other boats.. 1 lovely new (2 week old ) one and 2 of Bear Boats'... ALL of who were listing badly when morning came.  I'd been out in the night (3am this time) to loosen ropes even further and push us off whatever obstruction was causing the list...  it's not a shelf as such but "rubble" - presumable from the previously collapsed wall .  It wouldn't take a lot of effort to remove it - in fact, I'm considering buying a pair of waders to do it next time we pass through!

ANYWAY - moving on, we doubled back to Shipley to meet Patty at 12.30...  my PERFECT directions were ignored and she got (a little) lost finding her way to the boat.  I'd gone up to meet her only to discover there were 2 ways out of the train station.. doh... oh well, at least I now know where Aldi and Macdonalds are for future reference.

Turns out, Patty is also an old  experienced boater - alsas no longer with a boat.  You know when you instantly "take to someone"? ... well we did and it took no time for the wine to begin - preceded by a bottle of bubbly as a "thank you" from us for being the first person to book when I put the website up on line.

We nattered for a couple of hours - hoping the rain would subside but when it didn't, donned our outsidey wet weather clothes and chuggged off. 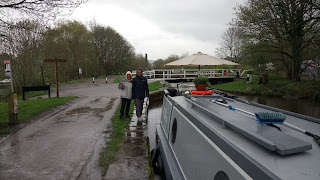 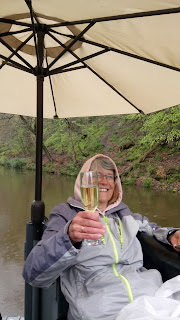 We settled for the night a short chug below Bingley which we'll ascend today before hopefully retiring in Riddleson .