I've lived in Wakefield knocking on 14 years now...  Andy came to join me about 10 years ago.  It's a nice enough West Yorkshire City - actually, that's a disservice....  it IS a nice City.  Like anywhere, it's got its good and bad parts - the people however are generally down to earth, WYSIWYG types... and I like them.

One of the first things "a stranger" will notice about West/South Yorkshire folk is that the older blokes call EVERYONE: "love"..at first, being a bloke called "love" by another bloke seems strange but you soon stop noticing it.

It's a nice thing.  There's something warming about an old bloke calling you love - it's impossible to be offended by it.

Anyway-  walking back from the open day at Fall Ings lock on Sunday, we took the old bridge over the river Calder - passing the Chapel on it. 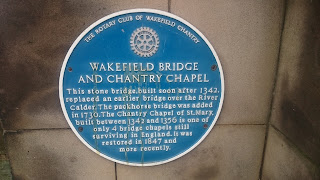 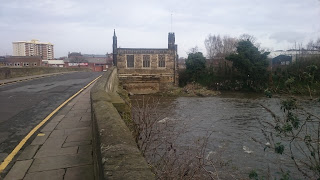 Even though we've lived here ages, it's the first time we've ever stopped and looked at it.  When you get closer, you can  see the faces carved in stone... I never knew they were there -even though  I drive to work each morning passing it on the new bridge. 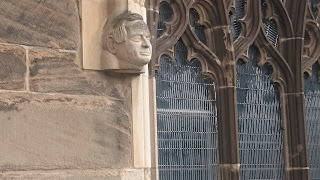 I don't recognise any of them - do you? 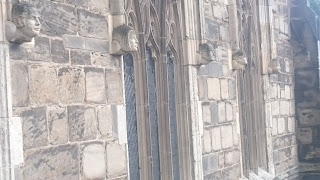 It must have been quite scary here on Boxing day evening when the river reached it's highest ever recorded level -  you can see by the rubbish in the trees how high it got: 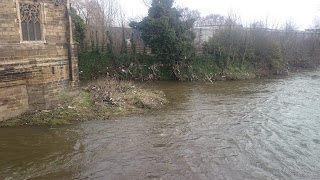 Having taken our first "proper" look at it, it seemed appropriate to google it - you can read about it here if you'd like to: http://www.chantrychapelwakefield.org  There is also a video if you have 18 minutes spare.

Speaking (well writing) about boxing day floods, we were reminded how close the new bridge came to disaster when we crossed the road towards the Hepworth...  It was closed for a while due to a hydro electric generating unit balancing on the weir which was washed away.

I took a couple of photos of it  but they're not very good - basically, it's STILL balancing on the weir with a big rope half securing it...  it'll be a pain to recover. 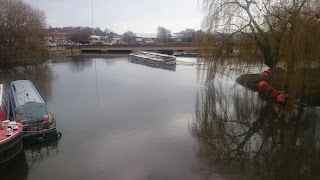 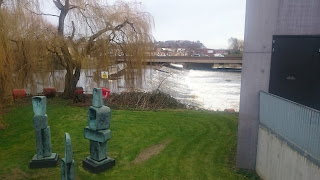 It's a pity it didn't some how smash into and demolish the ugly Hepworth building...  Sorry if that offends anyone but it STILL remains an eyesore in my opinion... I know it attracts visitors from far and wide to the town (which is a good thing) but for "most" of us locals, it's just an ugly building.

We took Andy's  youngest nephew there a while back and whilst they all do a sterling job, encouraging children to be creative...  the best part for me, was having a glass of wine in the little cafe place... it took the "edge" off the cultural aspect ;-)

This un-intentional installation is a highlight for me though - it's called "yellow transit van parked up"...  genius 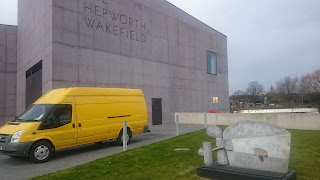 ONE good thing that has come out of it though, is the building of the new bridge behind it.  It looks over the wharf and is a great viewpoint.  I LOVE the diversity of craft on the waters.  Take a closer look at the ones out of the water - MY kind of "chock  work"... 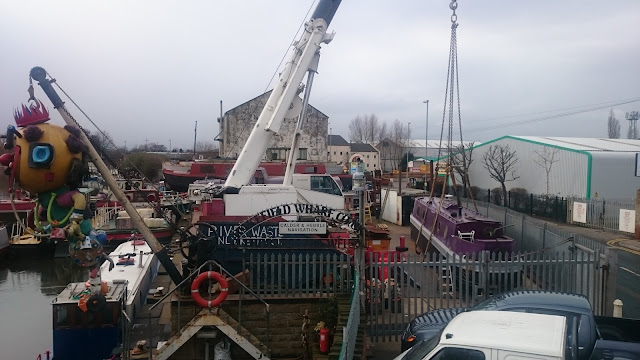 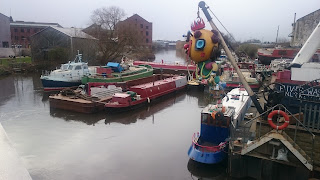 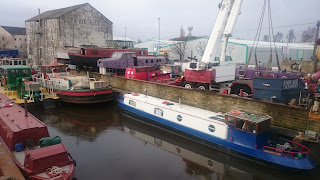 Incidentally, this is the place we're thinking about asking to crane our boat back onto the water... if we do decide to bring it home on a lorry.  That decision is a while off yet and there are plenty of other things to think/worry about before then.