I'm not sure HOW , but we appeared to have today (Sunday 6th March) noted down as an open day at Fall Ing's lock here in Wakefield... It's also (here in the UK) Mothering Sunday btw - in case by some chance you'd been able to overlook it... I mean, it's not like it's EVERYWHERE you look in Supermarkets, petrol stations, tv adverts is it?

SO - first thing this morning, we donned our walking gear and headed off along the tow-path through town to take a look.

The tow-path through Wakefield is a bit hit and miss if we're honest...  you have to work it out by trial and error in places.  Not to worry - we know the town well enough so it isn't a problem for us.

Fall Ings Lock is the 1st lock on the Calder & Hebble Navigation from the River.  It's a wide, deep lock and although we've yet to boat through it, we're familiar with it from our walks along the canal. The workforce have put in that temporary road stuff they use in show grounds and "set up camp" by the lock for their open day. 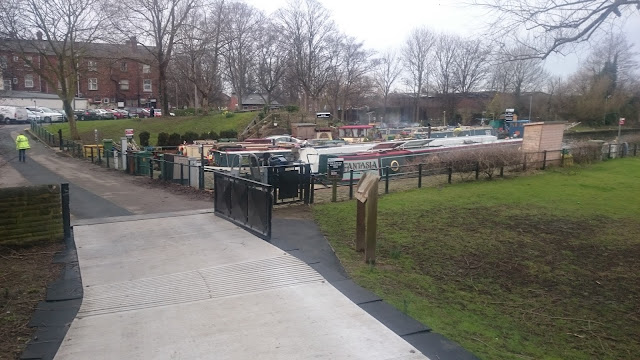 This road, takes you by the residential moorings.  I think there are 8 in total - we did look at one that was up for auction a while back but decided it was a bit too dear for us... especially considering we still don't have a boat to put in it.  It does have a nice feel to it though so we'd never say never... that said, there are a lot of notices around warning would-be felons about 24 hour CCTV... perhaps they do the trick... if not, maybe this chap is scaring them off: 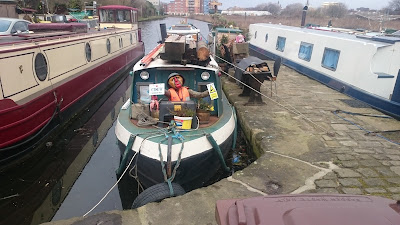 As we approached the lock, we were met and welcomed by some CRT volunteers.  Considering the cold morning (it'd been snowing a little earlier) they were all very jolly and approachable.  They'd set up a couple of stalls - and were touting various things aimed at getting some money off folk ... all fair enough really given how much is needed after the boxing day floods.  I did feel a bit tight NOT putting my hand into my pocket but considering I'm already a "friend" AND paying £1700 a year for a mooring we're not yet using, walked on by with a clear conscience. 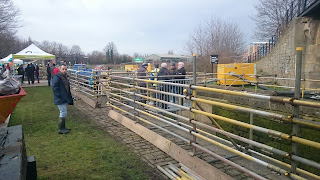 I had a bit of natter to someone as we descended the scaffolding into the lock... I don't think it was Richard Parry... perhaps he was coming along later lol.  Actually, thinking about that chap - to give him due credit, he certainly does his fair share... he gets around all over the place... I'm always surprised when I've taken  a selfie that he's NOT in the background :-) 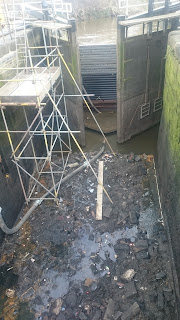 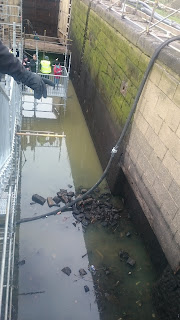 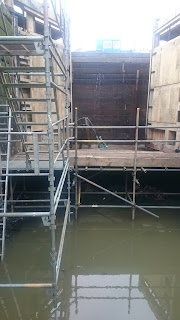 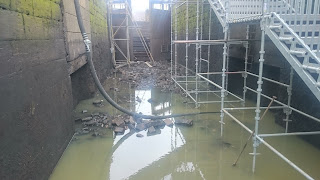 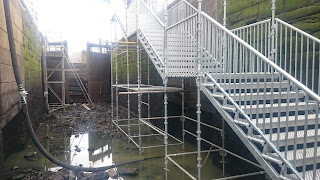 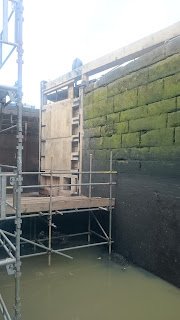 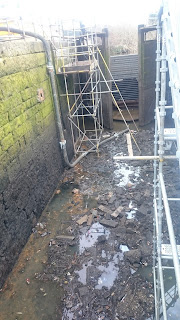 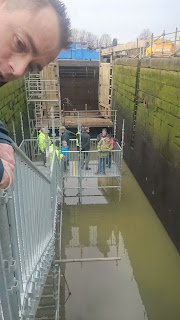 Sorry if that's a bit photo heavy but don't they say a picture paints a 1000 words? - Consider this, my dissertation!

The new gates apparently cost £30k each... that's a lot of money but they'll last a long time.  There's a video here with a friendly Yorkshire bloke (we mostly are really) inviting you to come along...

I hope they don't mind me linking to it...

It was quite interesting to be down in the lock with it relatively dry - even with stop planks either side, it was still taking a couple of large  pumps to keep the level so low.  I did spot an old boat anchor laying in the rubble.  We did say that despite it's depth, how surprised we both were at how little water there would be under your boat when empty...

The old gates are still laying nearby for people to look at - we've certainly seen worse ones still in use though. 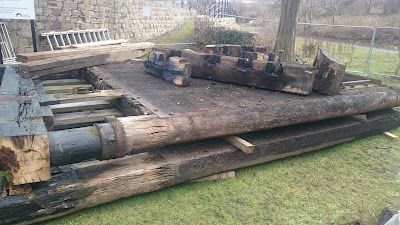 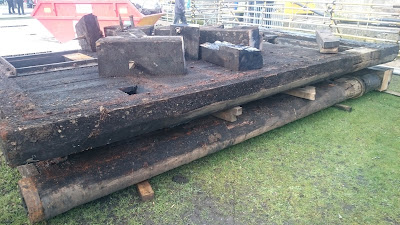 We took a scenic (well scenic ish for Wakefield) route home, taking in a few land marks - I'll add some photos later though,  as I've a load of seedlings which need pricking out now.