Yes - I know I'm blowing hot and cold at the moment... one minute I'm moaning about lazy teenagers, the next I've skipped to fridges - even I can't come up with a tenuous link for this one!

Fridges - or rather Fridge-freezers...  We've a bit of a conundrum here... in that usually, when there's something requiring consideration, a combination of "googling" or asking advice is enough to come up with a definitive answer - Unfortunately, this is another "pump-out verses cassette" type discussion!

What IS the question? - well, it's whether to have a 12vdc or 230vac Fridge-Freezer on board Ellis.

I'll try and explain...On the boat, having something that relies on a 230vac electricity supply being available 24/7 means leaving the inverter on all the time.    In theory you can leave it running 24 hours a day and this will provide the power required to run a fridge-freezer.  Doing so poses a bit of a problem, in that just having an inverter powered on, uses some power - even when the fridge-freezer isn't actually drawing any... so an appliance like this A+ rated one http://www.currys.co.uk/gbuk/household-appliances/refrigeration/fridge-freezers/essentials-c50bs14-fridge-freezer-silver-21888494-pdt.html 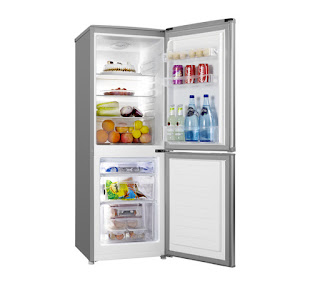 which purports to use 204khw per year will use MORE when the power is provided by an inverter.

Now, if you were to have a 12v applicance such as this one:http://12v-fridges.com/products/refrigerators/rir99dw4.html  you could expect a daily power consumption of
50.2ah -  Which is a daily saving of 5.49ah ...

Not a massive saving at face value, but when you consider in order to  replace this energy used generally means putting back MORE in the recharging process than was taken out in the first place.

This in turn leads to longer and more frequent charging cycles of the battery bank.  ADD to that the "risk" of needing to have the inverter powered up all the time - it's quite common for cheaper inverters to overheat and set fire to boats... To counter this perceived risk, quite often that means you need to spend more on a better quality inverter...

As a result, many folk would rather save the money on the fridge and use it to buy diesel to run their engines to charge their batteries.  It's all relative though, as doing so ALSO increases the frequency of oil changes etc.

Conclusion? - I dunno...  perhaps we'll toss a coin when we go to crick show in May...  at the moment, we're still heading down the 12v route  but as you may have gathered... we're fickle at the best of times :-)

It is definitely worth going down the 12v route. I know they cost more but you don't need to leave that inverter on.

Do you really need a freezer too? Living aboard for 16 years we have never had a freezer. We have a freezer box in which we can pack 15 meals in meat wise.. Sorry if you are vegetarian btw.

I like to buy fresh when I can and I do miss frozen peas and broad beans but sometimes I buy them and eat them 3 days in a row to eat up the packet!

I certainly don't miss my freezer that I had when I was in a house.

All our meat gets emptied from the packaging and put into sealable bags and named and dated and they just stack on top of one another.

However I do try to get as much meat as I can from a butcher and ask if they will shrink wrap it for me when I know it will then last 10 days in the fridge part (then I can stash the freezer bit with peas etc!!)

So just give a thought as to "Do I really need a freezer"!

Hi Sue, I'm going to print your advice out and stick it on our "wall" (read*spare room with scraps of paper, blu-tacked to a wall of boat related stuff).

The freezer decision is none-negotiable... I'd quite happily manage with a fridge with an ice box - as you say, you can fit a fair old amount in...however, my other half has decreed, we either have one that is NOT taking room up in the fridge or not at all and manage with a larder fridge - well, I like ice in my Gin and Tonic so what's a chap to do? :-)