Sorry - you many be wondering why I'm blogging at 7.00am on a school day - I'm going to the hospital shortly for another MRI scan on my back ... I had a discectomy a few years ago which ended many years of back pain... unfortunately, the offending disk has gone awol again, so it looks like another op - IF they'll do it.  I hate the scanner - I KNOW it doesn't hurt at all, but I'm a bit claustrophobic at the best of times... time to conjure up some happy thoughts!

ANYWAY - after working most of the bank holiday weekend, I stamped my feet on Monday and decided I was having the day off...  I shouldn't have to exert myself in this way but as you may have gathered, all isn't rosy in the world of restorations - ironic really given the mere job title, conjurers up gentle episodes of Lovejoy.

The weather on Monday morning was of course typical bank holiday weather - storm Kate (since when did we start naming storms in this country?) - (and WHO decided we would ?) had been doing her worst overnight by the looks of the amount of water in the garden.

NOT deterred, we donned our weatherproofs expensive clothes that claim to be weather proof, and took off for a walk - with route undecided. 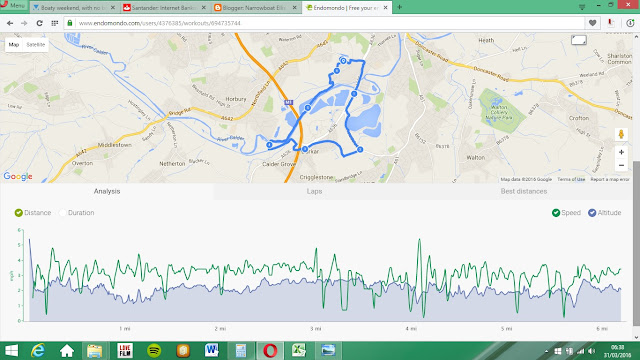 As usual, when we just set off, we invariably end up walking either by river, canal or round a couple of reservoirs.  Monday was no exception - as you can see from the Endomondo route.

Wind and rain a aide, it was a mostly bright walking day - our route took us along roads to start with - skirting round the side of Pugneys lake and then off to Durkar the back way - dull walking but quiet enough.

We used to live in the little semi rural village of Calder Grove - it sits above "Broad Cut" on the Calder and Hebble Navigation.  This poor area suffered badly during the Boxing day flooding.  The canal is often overwhelmed by the  river Calder which runs along side.  For some reason I didn't take my camera out of my pocket until AFTER we'd walked over the bridge, passing the (still closed due to flooding) Navigation Pub - for what it's worth, if you ignore the Trip Adviser warnings it's a nice enough place ... ok so it's NOT the cleanest looking - inside or out but we've never been poisoned or had a bad pint there...  I'd give them a call to check whether they are open if you intend calling in - I found this  http://www.canalandriversidepubs.co.uk/Calder-&-Hebble.htm handy list of pubs and contact details which may be useful.

Just after the pub we came across this pile of old gates which have been replaced during the recent stoppages. 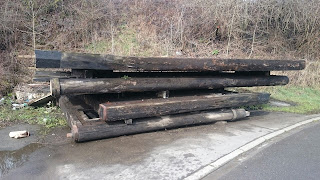 As we went around the corner to cross the river via "Freddy Cruger bridge" - I took a snap underneath.  You can see how much more water there was in compared to usual but nowhere near as much as there was in the Christmas floods - if you zoom in, you can see how high in the trees the debris remains - I wonder how long it will stay there until the wind sends it somewhre elese? 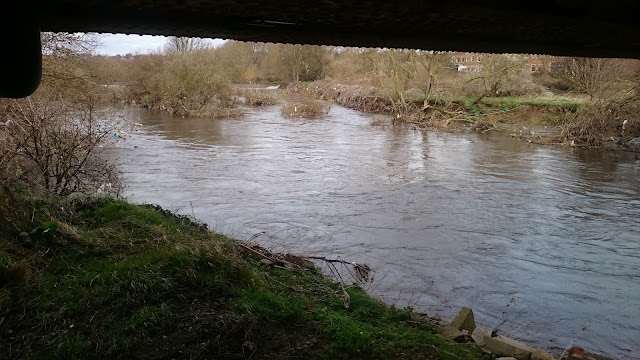 from the other side, you can see how perilous the bank side  property is - in recent years, they've gradually been building barricades to try and protect themselves from the river... not with much success judging by the ever increasing piles of earth we saw further downstream. 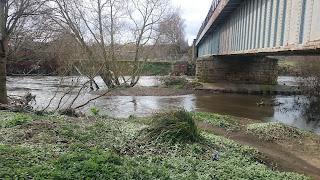 A few hundred yards further down the river, you can see the new lock landing CRT have put in place.  The old one... the one that is in a useful place just before the lock onto Broad Cut is about had it - This new one looks sturdy enough but 2 things spring to mind... Firstly, Folk will not use it as it's a pain give you have to go past the lock - moor up and then allow yourself to drift back into the river and have another go at getting in the lock - in fact on our last walk up here we saw 2 boats still using the old one!  Secondly, I can't help but thing by (for want of a better word) braying the supports into the small island which separates Broad cut from the river, this will have weakened an already narrow bit of land, increasing the vulnerability of the entire cutting.  I suppose someone, somewhere knows what they are doing.... ? 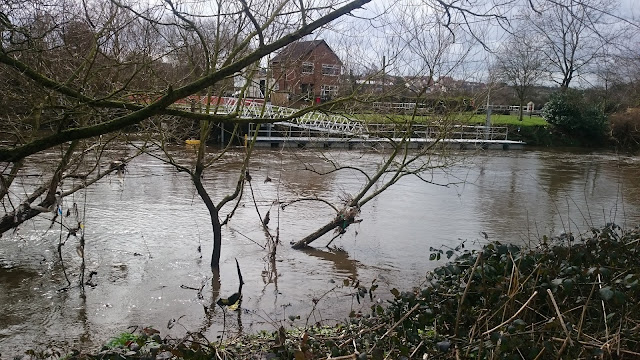 Bear in mind when looking at this photo, that on Boxing day, the river lever was over the top here .  The lock cottage garden was washed away - along with their chicken run.  A lovely pretty place to live when the sun is shining but not somewhere to be when mother nature is having a tantrum! 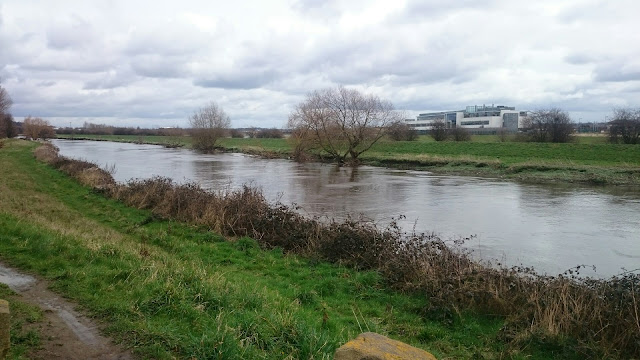 The river was still within her banks but as you can see, she didn't have much room to manoeuvre...

At Thornes Flood lock, the gates were firmly closed as you might imagine...  that didn't matter on Boxing day though as the river simply went straight over them! 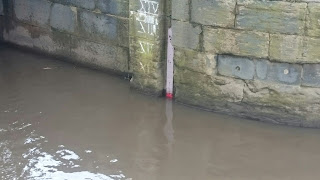 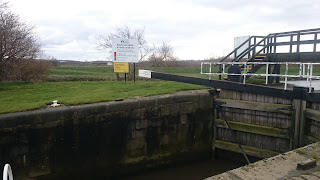 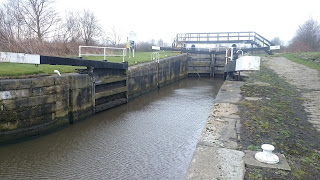 With a bit of luck, the weather will be kinder this coming weekend and we  can do the walk in reverse and have a wander down the private moorings area to see if there's anyone out and about to chat with.