When we were kids, we were told that electric power from the mains was 240VAC  This used to be the case.  The rest of western Europe was 220VAC.   As you might guess,  in a bid to conform, we now have what is known as 230VAC – which is a bit of a misnomer … 230VAC doesn’t actually exist anywhere unless you create it...it's a "blend" to cover the range so to speak.

I can vouch that the power coming into our house from the grid was recorded recently by the chap who did our solar panel survey – (http://www.medoriasolar.co.uk) as 251VAC.

Incidentally, we ended up with a 4KW system that we’re very happy with.  The installer is a small “Christian” company and whilst I don’t have any strong opinions on that either way, he DID do exactly what he said he would, when he said he’d do it and didn't make any silly claims… unlike the rest of the folk who came to quote… oh and despite the electrician falling out of the loft and cutting himself badly, everything was up and running the same day... he even cleaned up the lost blood and finished the job, before taking himself off to A & E .... I'd have taken him of course but as it happened, I had to leave them a key to get on with it as I was working down in Margate at the time…

Sorry – back to the point…  ON the boat, in addition to the 12VDC, we’re also going to need “mains -230VAC” power to run the Washing machine, microwave, *dishwasher  and whatever else we think we can’t live without.
*still in the consultation phase ;-)

As we’re NOT going to be moored in one place for long, relying on Shore power full time isn't an option… or rather isn't the ONLY option  SO we’re going to install a large pure-sinewave inverter as well as have a shoreline connection.

Shore power btw,  is simply a way of getting power from the mainland to the boat via a cable which connects to the boat's "ring main"...  It uses the same kind of 3 pin weatherproof connectors that are used in caravans etc: 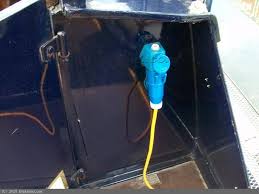 IT's an easy way of providing power to a "static" boat.  Quite often you see boats moored up (especially residential ones) and plugged in to the mains... it's an easy way of living and means you don't need to run your engine to charge your batteries or heat water - assuming you've a 1kw immersion heater in your calaroifier).

I won't reinvent the wheel here by explaining it fully but if you do want to know "how" it's done, it's explained fully here:

In simplistic terms, quasi electric is a bit rough... with 'square' waves rather than nice curvy ones...

Lots of devices will happily run using electric produced with a modified sine wave - however digital devices... especially modern washing machines and microwaves quite often wont.  You've also got to bear in mind the continuous and surge ratings...

We thought about buying a Quasi Sine wave inverter but have decided to spend twice the amount (again) and go straight for the biggest Pure Sine wave we can afford - working on the principle it would be just our luck the washer wouldn't work and we'd end up having to waste money buying a pure sine one anyway...

Introducing the planned inverter/charger (more about that later) 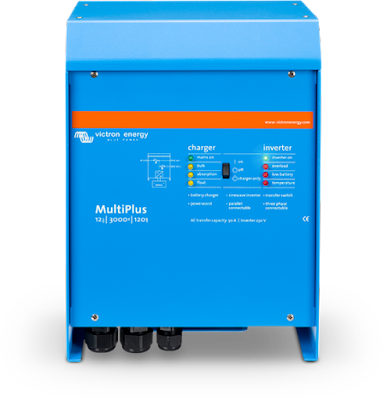 It can provide 3kw of power continuously and 6kw for a short period...  It's expensive but should be enough for us.

You can get cheap ones from ebay and they might do the job - however they might also be rubbish quality and set the boat on fire ... it's not worth the risk so despite the fact it hurts to spend so much money, that takes an awful lot of earning, we're consoling ourself with the the old saying "buy cheap, buy twice".

Remind me once we get the boat on the water to upload my planned "ring main" drawings...  for such a small space, we do seem to have allowed for lots of power outlets -  that's as a result of never feeling there were enough on hire boats so making a conscious decision to make ours the way WE want it... it'll add to the cost a little but in the scheme of things (given we can't afford MOST of it anyway) that's how it's going to roll lol.