Right then... GIVEN we've been saving every penny we can for the last 6 years... AND now have to cobble together an awful lot of money later in the year to pay for the boat, I was thinking...  HOW can we have a cheap holiday or 2 this year?

In the "old days" we'd book a cruise on a massive ocean liner and pretend to be rich for a couple of weeks.  More recently, we've hired a narrowboat from various places and "played" at being boaters.

Even that is expensive when things are so tight - AND with my employment teetering on the edge of tolerance, we decided to think outside the box...

What we came up with was/is a Canal Camp.   I sent off for some information from the Waterway Recovery Group and today it arrived. 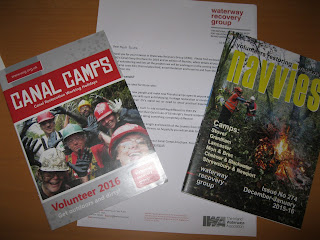 NOW - given I've got a bad back   (I have a prolapsed disc that's been operated on once but needs doing again) the plan is to ignore my weaknesses, TAKE the gabapentin & Oxycodone and just get on with it.,,  that was until I read more about it.

The idea is quite good.  You browse the brochure... pick a working group that tickles your fancy and then express an interest.  Next is paying the fee £63... and for this you get food, accommodation and even transport... along with some safety gear (although you DO have to provide your own steel toe-capped fotwear) - all in exchange for your free labour.

We were quite up for doing one until we spotted the accommodation provided:


"Most accommodation  is in village halls, sports clubs or similar.  Although it doesn't usually include beds, you can expect electricity, toilets and dry, draught-free sleeping areas!  Access to a hot shower will be provided at the end of each working day."

Andy doesn't seem too keen now and to be frank, neither do I if I'm honest lol.

WE do agree however, that had we been younger and known about them, we might have joined in - I bet there's a lot of fun to be had.

What we might do, is wait a while - until we're living on the boat full time and then try and find one where we can join in but retire to our boat of an evening instead of crashing on a floor!  IT's one thing to be 'down with the kids' but quite another to be on the floor with them!

IF you do know a young person (they tend to be the ones shuffling a long, glued to their phones on Tinder *Other dating apps are available*, please show them this link and suggest it might be a laugh.

... we'll send them the £63 anyway which will hopefully be more use than 2 middle-aged puffs would be!

Oh to be young again!